School, then school again and then lessons to be prepared and some correction. I desperately NEEEED a break so I decided to write something for my Throwback Thursday.

Then suddenly I remembered I had read Antonio Tabucchi’s wonderful novel “Pereira declares” (Sostiene Pereira) and that it was set in Lisbon and written by a university Professor of Portuguese Literature. It is one of the best novels I have ever read about the freedom of the intellectual and, as many other of my recent reads in contemporary Italian literature, I owe its discovery to a colleague and friend of mine, Maria Vittoria, a terrific teacher of Italian and Latin Literature who reads  very good,  unforgettable novels with her students. Thanks to her, I’ve read a lot of great books and discovered many talented writers in the last 8 years. Her to be-read-lists for my summer holidays are so precious to me. As I usually say, I'm one of her pupils! I usually read more English books than Italian ones but her suggestions are unmissable. Her students ARE lucky! 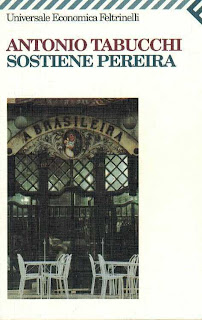 This novel is set in the summer of 1938, in fascist Portugal. The dictator Antonio Salazar and his regime are a presence, as is, across the border, equally ominously and casting a broader shadow, Franco and the Spanish Civil War. The title refers to a recurring feature of the book: it is presented as a series of declarations by Pereira. "Pereira declares ..." this and then that. It may sound annoying, but Tabucchi (translated in English by Creagh) manage it extremely well, make it an effective and even haunting device.

Dr. Pereira is in charge of the culture page of a newspaper, Lisboa, and he tries not to concern himself too greatly with political matters. He lives comfortably, a widower who enjoys literature and eating well. He seems satisfied with the small life he leads.

Impressed by an article he reads by a Monteiro Rossi Dr. Pereira contacts the young author and offers him a job to "write advance obituaries on the great writers of our times", so that material would be on hand if and when these people actually died. The first piece Monteiro Rossi brings him is on the Spanish poet Lorca, and it is far too political to publish in the climate of the times.

The sparring between the careful Dr. Pereira and the irresponsible and troublemaking Monteiro Rossi continues. Despite the young man's unwillingness and inability to conform to the standards the newspaper editor (or rather the political circumstances) requires, Dr. Pereira tries to be of help to him.

Pereira continues to translate French stories for publication in Lisboa, dutifully submitting them to the censor for approval. However, even he can't ignore the political situation entirely, and it is brought home to him by his young activist friend. Monteiro Rossi is much more involved in the events of the times, dangerously so, and he suffers the consequences. Staying at Dr. Pereira's the authorities catch up with him before he has time to flee.

Dr. Pereira is witness to the outrages perpetrated in his home, and it moves him to action, a final noble deed of heroism.

Tabucchi's understated book is an eery evocation of Fascist Iberia. Harmless Dr. Pereira, whose main pleasures are the enjoyment of fine food (there's a lot of eating in this book) and 19th century French literature, is out of touch with the difficult times. It is a very human portrait, and the final generous gesture shows even such a common, apolitical man capable of the necessary small acts of heroism that such times demanded.

An impressive, moral book, accomplishing a great deal without hammering home any message too hard. Tabucchi presents his story very well -- it is a fine read throughout. 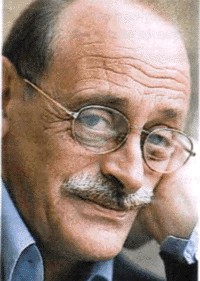 Antonio Tabucchi is one of the leading European writers, a man whose new works are eagerly anticipated, and who is widely translated across the continent and beyond. An Italian whose second home is Portugal he writes elegant and clever little books, stories and short novels that are deceptively simple yet manage to pack a great deal in relatively few pages. Tabucchi's characters are not loud or important people, but there is a humanity to almost all of them -- one which Tabucchi carefully reveals and emphasizes. There is anger at the Fascist legacies of specifically Italy and Portugal, and social injustice more generally, but Tabucchi presents it without loudly raging. Nevertheless, his censure is more resonant and effective than that of most socially engaged authors. Tabucchi writes well, equally adept lingering over a meal (preferably Portuguese) as presenting a dialogue on a philosophical or political topic. In some of the early works he tried too hard for effect, but in the more recent work he seems much more sure of himself and his writing. The latest novels, Pereira Declares and Requiem, seem almost effortless and read extremely well.

Tabucchi's interest in Portugal, Portuguese food, the poet Pessoa, and India crop up repeatedly in his work, as do certain periods and certain types. Nevertheless, even when his work is another variation on a familiar theme he generally brings much that is new to it. 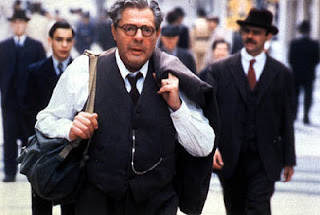 Pereira Declares has been adapted for the screen in 1995 by director Roberto Faenza. It stars a stunning Marcello Mastroianni as Dr Pereira and a touching Stefano Dionisi as young Monteiro Rossi.
Posted by Maria Grazia at Thursday, January 21, 2010
Email ThisBlogThis!Share to TwitterShare to FacebookShare to Pinterest
Labels: Antonio Tabucchi, Books, From Books to Movies, From my bookshelf, Throwback Thursday

I could hardly think my posts would have an effect on anyone! I'm glad for you quoting me MG! I think this may be a very nice book and as I have many stories from my grandma from the time of Salazar I may understand better the book. Lovely post as always!

Great post and review! I'm going to have to check this book out. I don't know that I've read anything from a Portuguese author, but I'll have to think on that one. Thanks!