Between Now and Never by Laura Johnston

Buh boom, buh boom. My heart thrusts with a force that takes me by surprise. Telling me something I don’t understand. A splitting pain, a longing to slip back under. They tell me I was in a hit-and-run, but I can’t remember what happened that night. All I know is that I woke up with pictures in my pocket, a card from one of those photo booths in the mall. And I’m in the pictures. Cody Rush. Me and… Julianna. Her brother was there that night, and my dad, the FBI agent, was the one who put her mom behind bars. What’s the connection? And why won’t Julianna talk to me now? Somehow, she holds the key to it all, and getting close–real close—to her for the answers I need will be no hardship at all…

Praise for Between Now & Never

“A romance that will keep teens turning pages.” ~ Janette Rallison

"This was a lot different than I was expecting and I was honestly surprised with how much I enjoyed it. The cover led me to believe this would be a cute, love story but it was a suspenseful and gripping read." ~ Review from Goodreads


The housing market is crashing, and Sophie’s life is crashing with it. At twenty-four, her successful real estate career evaporates. She’s broke, can’t find a job, or pay her bills, leaving Sophie wondering how her successful lifestyle became so fragile. At the urging of her roommate, Sophie accepts a job in her fallback career—teaching six-year-olds. She hopes it’s temporary. After all, how long can a tanking economy last anyway? The best part of the new job is Liam, another employee at Rio Grande Elementary. The worst part of the new job is, well, teaching. Sophie has a surprise real estate closing from a contract she wrote months ago, leading her to a niche in the real estate market and to a new partner, Kevin. Sophie must choose between Liam or Kevin and between a lucrative career or recess duty.

When Cody Bond, the Giants’ hot new catcher, agrees to ride in a benefit polo match to help heiress Zoe Tavonesi, he falls hard for the Italian beauty.
Cody’s determined not to screw up his career with relationships, especially when Zoe and the loving, tight-knit, aristocratic Tavonesis remind him of everything his dysfunctional American family isn’t. But while he may be a master of control on the baseball field, Cody’s iron will can’t shield him from the desire Zoe awakens.
Zoe wants nothing to do with her family's new home and vineyard in the California wine country. Every day spent in exile from the world she loves in Rome feels like an eternity. Her heart's set on returning to Italy and opening the art gallery her late mother always wanted. But the passion Cody fires has her second-guessing her plan and her dreams.
Read more »
Posted by Maria Grazia at Monday, March 23, 2015 No comments:
Email ThisBlogThis!Share to TwitterShare to FacebookShare to Pinterest
Labels: adult romance, contemporary, Giveaway, modern romance, Romance 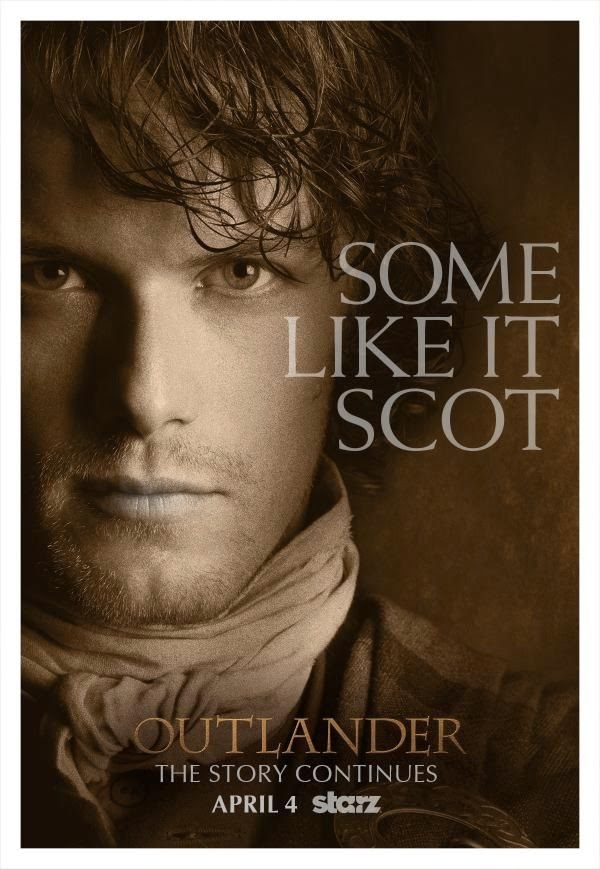 Being the period drama freak I am, I have been watching quite a few costume drama series recently. Not as many and as I would wish, but enough, I’d rather say,  for a very busy bee like me.

Now, first things first! Looking around my stuff, you may have noticed I’m slightly hooked by “Outlander”. Aye,  I can’t deny the fact I am verra favourably inclined toward the spicy intriguing  historical romance written by Diana Gabaldon and adapted for Starz by Ron D. Moore. I had bravely resisted Jamie Fraser’s charms as long as he remained a book hero,  while now, and  I must blame Scot-to-the-bone Mr Heughan for my sudden astonishing change, the situation has changed and I'm prone to an Outlander frenzy. Indeed.

I'm watching the series on Fox Life HD on Monday night. The first two episodes have been broadcast so far. I can watch it in the original language and enjoy Caitriona Balfe, Sam Heughan , Tobias Menzies and the rest of the talented cast perform in their real voices.

I can’t wait for April 4th ,  when episode 9 will be on Starz with all its burden of marital issues for the newly married  Claire and Jamie and, especially,  with the announced hot scenes of make-up sex.

Brenna Cameron was a on a quest of discovery. Ethan Gallagher was on a quest for revenge. Together they would discover a second chance. From the Scottish Highlands to the Montana frontier, experience the first book in a series about a family in search of peace, hope, and love on a wild land.
Read more »
Posted by Maria Grazia at Thursday, March 12, 2015 No comments:
Email ThisBlogThis!Share to TwitterShare to FacebookShare to Pinterest
Labels: adventure, Amazon Gift Cards, Book Blasts, Books, Giveaway, Giveaways, Historical Fiction, Romance

For a limited time only!


There's been a storm brewing in Liberty Calvert's life. But she didn't know just how strong it would be until Texas Ranger, Jackson Gentry, came to Liberty, Texas. Her already fragile life will be changed forever if he learns the truth. Her head tells her that the best thing for all of them is for Jackson to leave Liberty as soon as his investigation wraps up. But her heart is telling her this is the one cowboy she wants to spend the rest of her life loving.

Praise for the book


"I can truly say that I love this series of books. Can't get enough of them and I hope they continue. The characters and plot are totally believable and hold your interest. Thank you and keep them coming!" Amazon Reviewer