DREAMING OF BEING THERE, IN PARIS WITH ... MONET! 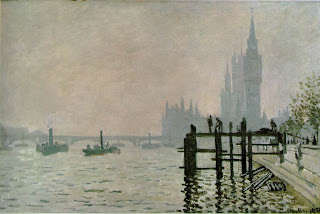 I was reading an article from The New York Times, "Shimmering Reflections of Monet Are Revisited" by Michael Kimmelman and since it is a brilliant review, I wanted to share it with you. I don't remember if I have ever told you how much I've always loved Monet, Renoir and all the Impressionists. If I hadn't, I have just done it. My first avatar on blogspot was one of my favourite paintings ever. I always go and admire it each time I'm in London and can visit the National Gallery. Here it is above.
I was saying about this excellent review of the huge exhibition of Monet's works at the Grand Palais in Paris , 22 September 2010 - 24 January 2011.
See the official site.
I just agree with every word in this article and started dreaming of being there in Paris in order to be able to admire the 160 paintings showed at the Grand Palais. 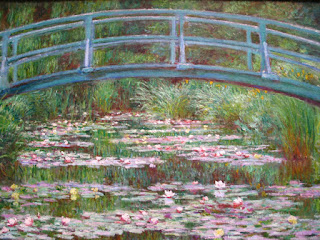 " The exhibition is ravishing - Kimmelman states - Monet the populist decorator of candle-in Chianti-bottle bistros and collegedormitories is modernism's prettiest painter, but not an especially heavy weight thinker or troublemaker. 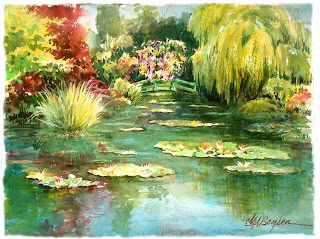 This show helps restore something of hisoriginal status. More than just familiar Impressionists, he comes across as a painter of strange and elusive probity, of memory and reflection, as an artist seeking not just to simulate sun, rain and snow, but states of mind as well. In part he did this by returning again and again to certain sites and motifs, often completing pictures in his studio, based on what he remembered.
Monet churned out 2,000 works, but his best paintings thwart the problem of their own endless reproduction by being , well, irreproducible. You just can grasp the bejeweled, darkling purple and pink light emanating from his moody reveries of Venice except by standing before them. They are views steeped in a kind of exquisite sadness.
The article goes on with remarkable thoughts about Monet's uniqueness:
"What makes these pictures look so modern is mostly the aspiration to render the intangible - to make millions of material facts immaterial and unshackle them from time. Giverny was both his Eden and object lesson. There, Monet could see the daily transcience of things saved from oblivion only by memory and by art". 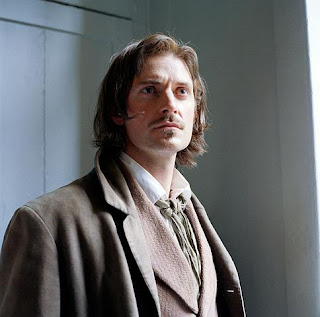 Monet showed us "places that already existed in our imagination", as Marcel Proust said, "as if waiting to be discovered and that now bid for our affection" .
I'm sure there are those among you who are waiting for ... their favourite Claude Monet (see picture on the left). No, I know, it's not a painting. That's young Claude Monet,  as he is in the eyes of those who saw BBC The Impressionists 2006 . If you , like me,  appreciated Richard Armitage's interpretation of the painter's difficult years in the 1870s, when horrified Parisians perceived his art as "leprous", you'll have already recognized him...If instead you haven't but you love Monet and the Impressionists you should see this 3-part series. It's another  great costume drama by BBC.
P.S. Is there anybody there giggling and thinking my love for Monet only came after my interest for handsome British actor, Richard Armitage? I can assure you my love for Monet and his art dates back to my school years,  while my interest for Richard Armitage only came later and lately. So , no need to giggle out there! That's just  fortuitous ... just like  my love for Mrs Gaskell's novels and his being Mr Thornton. I swear it!
Back to Kimmelman's review  and Monet exhibition in Paris ,  I wanted to add : what about a trip to Paris before January 24th 2011? I'm ready! I'd love to be in Paris with Monet! (No double meaning ... meant!) ;-)
Posted by Maria Grazia at Thursday, October 21, 2010
Email ThisBlogThis!Share to TwitterShare to FacebookShare to Pinterest
Labels: Art, Richard Armitage

The review is excellent, and it's so nice to read that Monet is being appreciated instead of being dismissed as being "pretty." I've loved him since I was a teen as well. My daughter visited Giverny a few years ago on a school trip, but I have yet to make that pilgrimage.

Fortuitous? I would say so :)

What a lovely pic of RA as Monet - never seen that one before.

I must confess that while I knew who Monet was and knew a few of his works, I cetainly was not into his art or really any other art. However, the process of the artist (be it writing, acting, designing, etc) has always been of interest to me. It was wonderful to gain more insight of all the artists featured in "The Impressionists" and I probably would never have heard or watched it if it weren't for .... you guessed it...Richard Armitage.

Now if I could just win the lottery to visit the exhibit!

Oh Maria Grazia! As soon as I read the news about the opening of this exhibition I started dreaming about going to Paris and visit it. You see, I'm in love with art and with Impressionists as well. I've seen The museé D'Orsay and all the Impressionists all over the world. But seeing all the pictures together, this would be surely great!!!
M Beatrice

It would be fantastic to go to Paris for this exhibition. I was in Paris this July and luckily I happened upon the Musee de Orsay. I will be posting about Monet some time soon! Beautiful post!

I liked a number of the Impressionists' works and have always wanted to visit Monet's garden. Monet's paintings meant so much more however after seeing RA in BBC's Impressionists and when an exhibition came to our art gallery last year I was really moved to see some of the paintings in RL!!