Comedy or mystery ? Both. More comedy than mystery. However,  since I desperately  needed some light stuff,  a lucky escape to cheer up… VEXED was just perfect. There’s no point pretending it’s massively original, but it is incredibly well-done ( Written by Howard Overman - creator of hit E4 series Misfits - and brought to life by Psychoville director Matt Lipsey) . Toby Stephens is brilliant in his role. He’s  Jack, insensitive, lazy, incompetent detective who  screws up everything  but  always lands on his feet. And he’s made me laugh out loud more than once in these 3 episodes! Actually, both the leads are great: Lucy Punch is irresistible in her unfortunate marriage-on-a-crisis and incredibly good at managing Jack’s unstable mood and unacceptable incompetence. Unfortunately, it seems unlikely that this series will be back for a second series: figures and reviews were not that good. 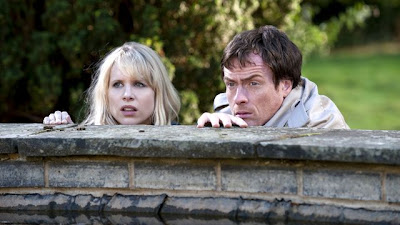 I found it lovely, instead, bizarre and well done. It was cheeky, irreverent, puerile, sometimes inappropriate but, since it is not easy to make me  laugh out loud  it was successful to me!  And I simply  can’t understand why reviews were so negative. There are so many awful programmes on our state and private channels! You can’t even imagine. That’s why I stopped watching  Italian TV apart from very rare occasions . When there is something I may like, I record it and watch it avoinding the unbearable quantity of ads they interrupt the show with.
Ok. I think it is clear I liked the 3 episodes of VEXED. The 2nd one is  the best.  Toby/MrRochester/Prince John was terrific as Jack. Just have a look at him in this series! Wonderfully bad as a detective but so hilarious! 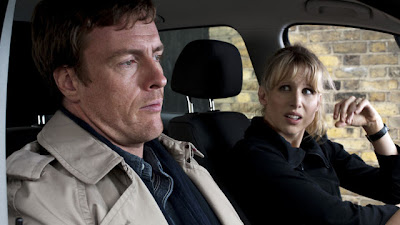 Ep. 1
Jack and Kate, bright, fun, attractive police detectives, have very different approaches to the job and life in general. In fact they disagree on everything. The hunt for a killer targeting single women proves both good and bad for their own love lives, career paths and their relationship with each other.
Ep. 2
Unconventional police detectives Jack and Kate find themselves entering the world of therapy when a depressed banker being treated at a private rehabilitation clinic is targeted by a hit-man.
Conflict is inevitable as Jack's attitude towards therapy is predictably dismissive, while Kate's struggle to save her marriage gives her a very different perspective.
Ep.3
The high profile kidnap of a girl band member puts an uncomfortable spotlight on unconventional police detectives Jack and Kate, resulting in an embarrassing ransom situation and mounting tensions.
Meanwhile, Kate's husband Dan wants to start over by moving back to Bristol, and Jack obsesses over the possibility that he might be a 'one ball'(LOL).
That’s all. I must warn you: this series and its protagonists are weird and absurd. So it is possible to get to extremely opposed reactions: either you love them or you simply hate them. I found it so entertaining I couldn’t help watching the whole thing.  I laughed and thought : Silly, shallow man! Stupid woman! But I couldn’t stop watching and laughing and watching …
Back to work. I have to prepare this year’s didactic plans for my 5 class groups. Thanks BBC2, Toby and Lucy for making me laugh. It was good therapy. Unfortunately … fun’s over now!
Posted by Maria Grazia at Monday, October 18, 2010
Email ThisBlogThis!Share to TwitterShare to FacebookShare to Pinterest
Labels: BBC Drama

Isn't it fab? Predictable plots, yes, but crikey, what a lot of fun it was! Absolutely loved it! Toby Stephens was perfect as Jack and I kept thinking Lucy Punch's voice and way of talking is very similar to that of Katherine Parkinson (Jen in The IT Crowd). Would be great to see the story continue, especially now that Kate ditched that complete bastard of a hubby! Then again, would it be half as much fun if Jack and Kate got together? Perhaps not. Still, there were definitely lots of laugh-out-loud moments, and it was delightfully non-PC. I've only blogged about part one so far, as I never got around to do the other two parts, but maybe I should - if only to put more positiveness for Vexed out there! :) Glad you enjoyed it too, and a great review as well! :)

I haven't heard of this series at all but I'm so intrigued -- plus the two actors are ones I love and don't get to see enough of! Thanks for putting this on my radar -- too bad it won't get a second season.

I am sure I would love this series too. But I haven't noticed it on any channels yet! :(

Have you watched Sherlock Holmes? The new release? I think you might like it if you have not already watched it.