THE LAST OF THE MOHICANS - MY REVIEW

Do you remember Avalon? One of My Blogger Buddies? She's having a Native American Celebration Month at her blog  (HERE) and asked me to write something about the themes she's dealing with this November.
This is my choice, a review of a great novel. I often read pages from this fascinating book by J. Fenimore Cooper with my students: The Last of the Mohicans. This is my tribute to this great people and their history. Per non dimenticare... In order not to forget...

"Few men exhibit greater diversity, or, if we may so express it, greater antithesis of character than the native warrior of North America. In war, he is daring, boastful, cunning, ruthless, self-denying, and self-devoted; in peace, just, generous, hospitable, revengeful, superstitious, modest, and commonly chaste." (from The Last of the Mohicans) 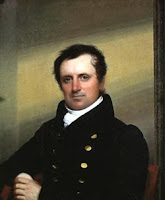 Cooper's fame rests on The Leather-Stocking Tales and the  creation of the first American epic-hero: Natty Bumpoo, a hunter and frontiersman, who is nicknamed in several ways in the different novels: " Leather-Stocking",  Hawk-eye, "La Longue Carabine", "Pathfinder", "Deerslayer" or "Trapper".  The first 3 novels of the series are The Pioneer (1823), The Last of the Mohicans (1826) and The Prairie (1827). The other 2 novels were written after a tour in Europe and after many years, The Pathfinder (1840) and The Deerslayer (1841). 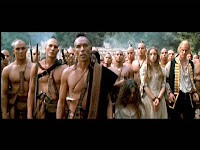 Cooper had the idea of transporting Leather-Stocking to the Far West while he was writing The Last of the Mohicans. He had read with care Major Stephen H. Long's account of his expedition up the Platte River. During the spring of 1826 or earlier he met a young Pawnee chief who became the model for Hard-Heart in The Prairie. From the narrative of the Lewis and Clark expedition he took such names as Mahtoree and Weucha for Sioux chiefs. The character of Natty, who stood about six feet in his moccasins, drew upon folk traditions of historical pioneers such as Daniel Boone. Natty's friendship with the Delaware chief Chingachgook established him as a mediating figure between the white, advancing settlers, and the threatened culture of the Native Americans. Natty himself was educated by the Delaware Indians, who gave him the name 'Hawk-eye'.
The Last of the Mohicans (1826) 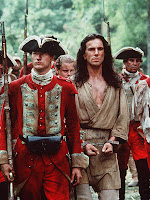 (ALERT SPOILERS!)  The story is set in North-West America during the French and Indian War(1756-59) which ended with the expulsion of France from the region. The plot deals with the adventures of Alice and Cora Munro who, together with Major Heyward and their guide, the native Magua, try to reach their father, the British commander at Fort William. Magua is indeed the chief of the Hurons, a native tribe allied with the French. He captures Heyward and the 2 girls but they are saved by three people: Natty Bumpoo, here called Hawk-eye, Uncas, the last of the Mohicans, and his father Chingachgook. In the end Cora will be killed and given an Indian burial near Uncas as a sign of the friendly relationship between the English and the natives. Magua will be killed by Chingachgook, symbolising the link between the European and native cultures.


The characters and the themes
Among Cooper's characters, there are the rather stereotyped white men belonging to the high ranks of society, like the British commander Munro and his two daughters Alice and Cora; the white men of the lower rank, who live the frontier- life and speak dialect or slang; the natives, modelled on Rousseau's myth of the "noble savage". Cooper's natives are proud and brave (Uncas and Chingachgook) but also wild and brutal (Magua). Uncas, the last of the Mohicans embodies the end of wilderness and its values that are being destroyed by the colonisers.

Cooper's themes are those typical of the Romantic Age, being very much influenced by Walter Scott: he dealt with the opposition between different cultures, between the individual and society, between the individual and nature. His portraits of genuine primitive life, his description of the woods and the forests, of the prairies and vast horizons of the Wild West contributed to creation of the American myth.

While Cooper's Indians undeniably made an important impact on American fiction, they have been the subject of much literary debate. The most common charge leveled against Cooper is that the Indians did not resemble any that could be found in life; simply, they were wildly unrealistic. Indeed, Cooper did not have much first-hand knowledge of American Indians. In Savagism and Civilization, Roy Pearce states, "Cooper was interested in the Indian not for his own sake but for the sake of his relationship to the civilized men who were destroying him. So far as we can tell, Cooper had little personal contact with Indians. Rather, he read widely in the best authorities on individual tribes; in particular, we know that he read of the Delawares in Heckewelder and of the Plains Indians in Biddle's account of the expedition of Lewis and Clark..." . In fact, Cooper told his friend Sir Charles Augustus Murray, "I never was among the Indians. All I know of them is from reading, and from hearing my father speak of them".

However, Cooper's limited exposure to American Indians seems to have been enough for many readers to accept his characters. Furthermore, Cooper himself denied that they were unrealistic in the introduction to Last of the Mohicans; instead, he claimed poetic license. He asserted: "the reader who takes up these volumes in expectation of finding an imaginary and romantic picture of things which never had an existence will probably lay them aside, disappointed. The work is exactly what is professes to be in its title page--a narrative" . Cooper asserts that while his texts do not reflect historical events, they preserve historical flavor.

In Cooper's travel narratives, Notions of the Americans, he does not indulge in any fanciful ideology concerning the American Indian present or future situation. Pearce states: "In the Notions he might hope for gradual civilization of the Indians, but he was forced to admit that savage heroism, as he called it, was doomed, even in the west, to go down before civilized heroism". His chapter addressing "Indians" is an excellent contrast to his Indian characters in Last of the Mohicans.


( the photos in this post are from the movie adaptation of the book, The Last of the Mohicans, 1992)
Posted by Maria Grazia at Monday, November 15, 2010
Email ThisBlogThis!Share to TwitterShare to FacebookShare to Pinterest
Labels: Books, From my bookshelf

I think "romanticizing", for every culture or era, is just more intriguing then nonfiction. I am delighted authors invented such a wonderful imagination as I take joy in the feeling such books and films give me.

Have you ever read Sara Donati's Wilderness Series? If not, perhaps you should give it a go. It is set after The Last of the Mohican's and is about the family of Hawkeye. I have always hoped Hollywood would make a movie based on Donati's novels.

Thanks again for the review. I remember reading Last of the Mohicans as a child and again as an adult. It has always been one of my favorites.