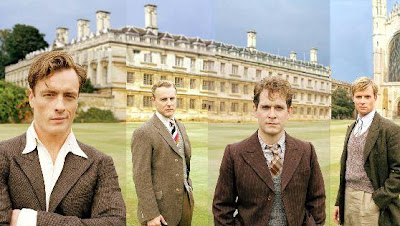 This is the story of the most notorious double agents in the history of spying.
Four very British traitors (from Cambridge Spies DVD)
"Betrayal is a cancer. Let it eat your soul ...". I'm  quoting Sir Harry Pearce from Spooks 9. But it doesn't seem like that at all watching this gripping drama.The glamorous four are rather romanticised and manageto pass through awful historical tragedies with a certain light touch.
I found it among my pile of TBW stuff. It is a BBC 4-part series starring Tom Hollander, (Guy Burgess)  Toby Stephens (Harold Kim Philby) , Rupert Penry-Jones (Donald Maclean) and Samuel West (Anthony Blunt) . It conjugates spy and period  drama. CAMBRIDGE SPIES was broadcast on BB2 in 2003 and,  if you like me missed it, it is available on DVD.
For someone loving period drama,  it is a happy reunion of familiar faces. Brilliant cast indeed. 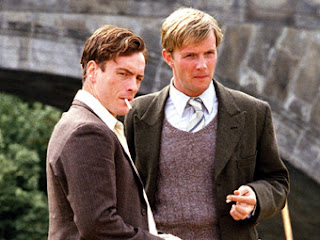 The truth behind fiction
Maclean, Burgess, Philby and Blunt were British members of a KGB spy ring that penetrated the intelligence system of the UK and passed vital information to the Soviets during World War Two and the early stages of the Cold War.
The members of the ring were Donald Maclean  (1913 - 1983) Guy Burgess (1911 - 1963), Harold 'Kim' Philby (1912 - 1988) and Anthony Blunt (1907 - 1983). Several other people have been suggested as belonging to the ring, including John Cairncross. Blunt became a communist in the early 1930s and was recruited by the NKVD (later KGB), the Soviet security agency. While teaching at Cambridge University, Blunt was influential in recruiting the other three, who were all students there. 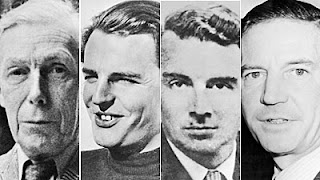 Burgess became a journalist after he left university, but on the outbreak of war joined MI6. Maclean was in the Foreign Office during the same period. In 1951, tipped off by Philby that they were under suspicion, Burgess and Maclean defected to the Soviet Union, where they spent the rest of their lives.
Philby was also a journalist but joined SIS (also known as MI6) in 1940. Just before the war ended, he was appointed head of SIS's anti-Soviet section. Thus the man charged with running operations against the Soviets was a KGB agent. He later became chief British intelligence officer in the United States. After Burgess and Maclean fled to the Soviet Union, Philby came under suspicion and was forced to resign. In 1963, he defected to the Soviet Union, and died there. Blunt worked for MI5 during the war. After the war he had a distinguished career as an art historian. He was director of the Courtauld Institute and Surveyor of the Queen's Pictures. He was knighted in 1956. In 1963, the British government discovered he was a spy but offered him immunity in return for information. In 1979, the story got out and Blunt was stripped of his knighthood. 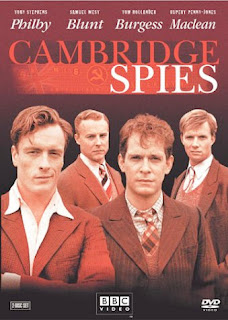 Good quality TV
It is good TV drama though I've read reviews complaining for many historical inaccuracies. Being not that informed about the real story of these glamorous double agents, I just tried to enjoy the interesting, involving plot Peter Moffat created in his screenplay. I loved the 4 protagonists, I admired the fact that the characters are portrayed accurately and convincingly. Having just seen the last of the four parts, I must admit  that for entertainment value it is top notch. If you watch it with an open mind, as the game of four masterminds who underplayed the archaic MI6 for their principles, you'll enjoy 4 hours of great TV.
Cambridge Spies at Amazon.com
Cambridge Spies at Amazon.co.uk
BBC Press Releases & Press Pack
Posted by Maria Grazia at Monday, November 22, 2010
Email ThisBlogThis!Share to TwitterShare to FacebookShare to Pinterest
Labels: BBC Drama, Costume drama, My DVD collection

The story is so fantastic it is almost unbelievable!

Cambridge Spies was the first other work that I watched after discovering "The Boys from 5". Since RPJ was the first spook I fell for I started tracking down his work. I really enjoyed this and was fascinated by the story.

Interesting series, MG. Loved the cast (apart from Tom Hollander who I cannot stand the sight -and the voice - of), but I wish they had concentrated more on the political/moral issues of the characters rather than on their homosexuality ...Ciao. A.

Ahh, I should really watch this. I mean, Stephens AND Penry-Jones AND Hollander ...! Yay!! (Okay, admittedly, I only really crush on Hollander in Pirates of the Caribbean, but still.)

Have a nice weekend!

I really liked this series and pleased to hear that you did too, MG - the historical inaccuracies didn't worry me too much either, I enjoyed it as a great piece of drama in its own right and with such a fantastic cast. Great stuff.

I don't agree with your assessment that the miniseries allowed the four main characters to endure historical and personal tragedies with a "light" touch. And what ever "glamour" that was presented in the production was at best superficial to me.