PERIOD DRAMA - THE BORGIAS UNDER THE SPOTLIGHT

, haven't I? If you don't remember have a look HERE and HERE. It is not so famous, not so glamour, not so rich in facilities but it is my native town and I have always lived here, my dear and most of my friends live here so ... I can't but love it. It's called Subiaco. Why did I started telling you about it? Because I've just read on Passages to the Past, one of the many blogs I follow,  that Showtime Networks after producing THE TUDORS ( I just saw the first series ) is going to shoot a 10-episode series about THE BORGIAS to be released in spring 2011 and starring JEREMY IRONS as Rodrigo Borgia aka Pope Alexander VI, father of Lucrezia and Cesare Borgia. Now these names are strictly link to my native town. Can you see the pictures on the left? They are shots of the so-called Rocca dei Borgia , the Borgias' Fortress, which overtops the town laid on a hill. It was built in the 11th century but was then militarily fortified by Rodrigo Borgia - later Pope Alexander the VI- in 1476. It became the Borgias' residence and Lucrezia, Rodrigo's famous daughter and Cesare's sister, was born there. Now they say the fortress is haunted by her ghost but ... I can't assure that.

Now I really hope this series will be produced and released because I'd be greatly interested in watching it. I hope as well that it will be a good one, even better than THE TUDORS. Jeremy Irons is such an excellent actor that I think my hopes are well entrusted. 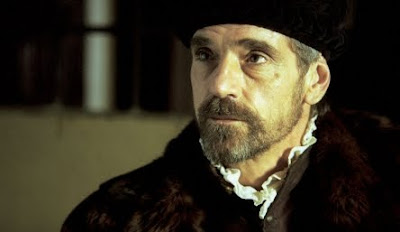 In the article I read they state: "THE BORGIAS will be a complex, unvarnished portrait of one of history's most intriguing and infamous dynastic families. The series begins as the family's patriarch Rodrigo (Jeremy Irons), becomes Pope, propelling him, his two Machiavellian sons Cesare and Juan, and his scandalously beautiful daughter, Lucrezia, to become the most powerful and influential family of the Italian Renaissance. And all that power and influence eventually leads to their demise. As Machiavelli once said about his friends, the Borgias, "Politics have no relation to morals."

(If you want to read the whole article click HERE) 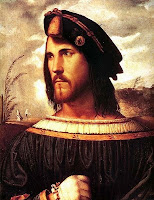 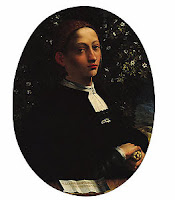 To know more about  this Renaissance powerful  family visit

Oh my goodness, that second pic makes your hometown look fake!! It's so perfect looking! YES forget you read my post!!!

This is so nice! To live in a historic city! I hope they will shoot some scenes in your city!

This is such exciting news!

I hope this series is shown here, it looks very interesting!

This sounds like an excellent series and one I would watch avidly, and not just because of its connection to your home town. I have long been interested in learning more about the Borgias, and from the pictures the series sounds stunning visually as well.

I've only ever been to Milan (but three times for business), but hope to make it to Rome sometime within the next five years. I even started learning Italian to get ready!

This is exciting! The Borgias have a fascinating history.

This series will have Jeremy Irons starring. I think he is a good actor.

You can ghost hunting, lol, since you live near a haunted area....

Jeremy Irons is really coming to Subiaco? :-O
I think I'll accept your kind invitation to come and visit you, then ;-P
Hope to meet his wife, too: I adore her as Mrs Thornton! :D

What a picturesque place to live! And I can't wait to see a period drama about the Borgias with Jeremy Irons, too!! Very exciting!

@M.Gray, Luciana,Muse in the Fog, Deleilan,Jane GS, Maire,Avalon, MrsKarenBlixen,phylly3
Thanks to you all for being so kind and commenting. Just to be clear, I didn't say they are going to shoot the drama here, in my hometown, but , of course, I'd be honored if the did!

Amazing post. I am very excited about the series and greatly enjoyed getting a glimpse at Subiaco, as the Borgias fascinate me. When the series airs, I hope you will share more of your insider's perspective.

We have a new fan wiki for the upcoming SHOWTIME series THE BORGIAS Come join us FREE and help make this the best fan site ever!
http://theborgias.wetpaint.com Follow us on Twitter