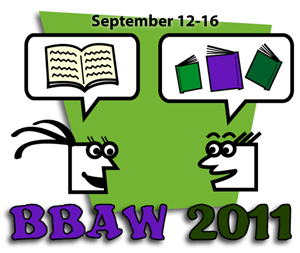 Trisha lives south of Chicago, Illinois in the U.S. with her husband, Brian, and her still-in-utero first child, currently named The Floppy Alien, (name probably to change upon birth). Obsessed with books and movies, her job feeds her passions as she teaches composition, literature, and film at a local college. eclectic / eccentric has been her outlet for creative expression amongst like-minded peeps for over four years now, and she has no intention of calling it quits anytime soon, despite her rather sporadic presence in the last four months.

For me, being a book blogger is all about community. After graduating from my master’s program, my outside-of-work brain activity plummeted as I immersed myself in trashy romance novels in a sort of rebellion against the intellectual heaviness that was six years of college. When I found out there was a whole world of readers (of all kinds of books) running amok in the blogosphere, I just had to check it out. I was hooked from day one. Reading challenges, others who simultaneously like Neil Gaiman,  J.K. Rowling and Fyodor Dostoevsky, creative intellectuals and whacky smarty-pants, everything about the community appealed to me. And still does!
What is your favorite place to read? 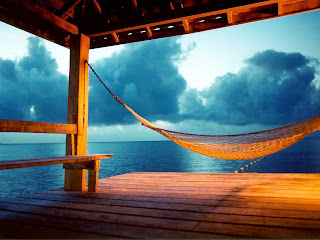 On a hammock by a beach. I’ve only had the pleasure on three occasions, but all three were highlights of my life. J
What do you do when you aren't reading or blogging?

Most of my time is taken up grading papers and preparing for classes. I do, however, find time to watch copious amounts of television. What can I say? I’m addicted to stories. Lately, I’ve been rather obsessed with Entourage, Sons of Anarchy, Las Vegas, and True Blood. I also have a few fallback shows that I can watch over and over again, including Supernatural, Robin Hood, Stargate and Stargate Atlantis, Firefly, and….well, I think you get the picture.
Which bookish character would you like to be?
As for which bookish character I would like to be, well, pull up a chair ‘cuz I have a ginormous list. To save some time, I’ll just give the first to come to mind: Alexia Tarabotti from Gail Carriger’s Parasol Protectorate series. A no-nonsense, kick-butt heroine with a hottie for a husband, Alexia also gets to look hot in her steampunkish Victorian London ensembles with tricked out parasol.


Who is your favorite character in a book?

I don’t really have a favorite anything, and I’ve read so very many books that choosing a favorite is impossible.  While I may not be able to pick a favorite character, I can tell you a character I hate-to-love: Sookie Stackhouse. That woman drives me absolutely crazy, and yet I cannot stop reading the series, and some small part of me loves her even as she is annoying the heck out of me.
Who is your favorite author?
As I said, I’m not big on favorites, but Neil Gaiman definitely ranks up there in the top ten. His books are so wonderfully fantastical and creepy and important and beautiful and entertaining. All around awesomeness. I really love Mary Roach’s creative nonfiction. Her snarky, intelligent, and honest voice really appeals to me, and she chooses extremely interesting topics to explore (death, sex, ghosts, space).
How can we promote reading to those who say they don't like it?

This is something I struggle with on a consistent basis. I teach Introduction to Literature, a course taken by a great deal of people who do not like to read. Yeah, I don’t get it either.  First and foremost, I try to show my reluctant readers the extremely wide variety of books that are out there. Most non-readers immediately say that novels are old, stuffy, too difficult, and irrelevant. They also seem to think that all books are about overly intelligent, boring, middle-aged white people; that they are all text-heavy, three-penny-worded monstrosities. Proving that’s not the case works wonders.
I also find that making reading a social activity helps tremendously. If they can read the same book as others and talk about it, play with it, and interact with it in a group, they are much more likely to have fun while reading. When it comes down to it, if you want people to like something, you need to make it fun!
And as all of us book bloggers know, reading is some of the most fun people can have legally!
Thanks, Trisha,  for being my guest today. Good luck with your teaching, blogging and  especially with The Floppy Alien!
Trisha's interview with me is on her blog today. Read my answers there.
Posted by Maria Grazia at Tuesday, September 13, 2011
Email ThisBlogThis!Share to TwitterShare to FacebookShare to Pinterest
Labels: BBAW, Blogging, Interviews

Love that the baby's name is only "probalby going to change"!

Thanks for the interview!

Damn...probably. Obviously past my bedtime!

I just recently started reading Trisha. It is fun to get to learn more about her. I have been hearing a lot about this Protectorate series. Hmmm. I just might have to cave and check it out. . .

I just checked my email and today's daily Kindle special is Soulless so I bought it. :)

Great interview, I loved the fun tone of it! You had me at "The Floppy Alien". And the heroine sounds awesome (that parasol going on my Christmas list!)
Nice to meet you Trisha!

I really enjoyed this interview, and getting to know more about Trisha...since meeting up in The Strand over a year ago didn't allow much time for talking!

I like that you 2 came up with the questions together and responded to the same, nice team work.

Congrats Trisha. I love your character, that seems a great choice for you.

I'm so glad to have found your blog via Trisha's. Great Q&A here, and I look forward to exploring your blog more soon!

I'd love to have Trisha as my lit professor, even if I already possess a love of reading! She's such a great blogger, and it was fun getting to know her a little better. Thanks!

Trisha is one of my very favorite bloggers, both online and in person!

I really love that you asked each other how to get other people reading. Very fun. Love the answers, and the baby name. lol