THE WEDDING SHROUD BY ELISABETH STORRS - REVIEW AND GIVEAWAY 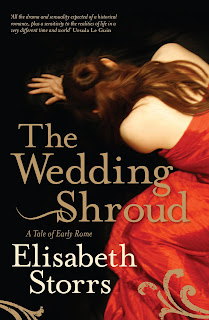 It got me hooked from the first words in the Prologue -  "Her whole world was orange" - and I couldn't put it down for a while. THE WEDDING SHROUD is a surprising page-turner , about-500-page- thick, dense with tension, emotion and sensuousness, crowded with unforgettable vivid characters: Cecilia, Mastarna, Tarchon, Marcus, Drusus, Larthia, Ulthes, Erene, Artile, Arruns, Cytheris, Tulumnes, and even dead Seianta. Elisabeth Storrs combines detailed research and remarkably talented writing in her portrayal of life in Early Rome. Her heroine, Cecilia, is a complex character,  presented in all the frailty of an unloved child grown-up into a torn young woman. It is not easy for her to love, trust or rely on others, especially once she gets to an enemy city and culture. Prejudiced, stubborn, frightened and divided between her loyalty to Rome and her duty as a Veientane wife, her mind keeps her tied to Roman values and morality, while her heart and her senses wish and escape and are fascinated by the freedom and beauty she finds in Veii.


She is the daughter of a foe there, so finds herself an outcast, but she is also welcome with respect, love and sympathy by Mastarna's family and best friends. Mastarna, her husband. An arranged marriage, a pact between her uncle, who adopted Cecilia after her father's death, and the rich and noble Etruscan, Mastarna: their union is the symbol of the agreement between Rome and Veii to prolongue the truce established two years earlier in their endless enmity. She loves a handsome Roman soldier, Drusus, and has only got one friend, her cousin Marcus:  now she has to leave them both and marry Mastarna.


Cecilia is determined to remain faithful to Roman virtues while leaving among the sinful Etruscans. Instead she finds herself tempted and charmed by a mystical, hedonistic culture. Mastarna wins her resistance and seduces her into his world,  offering her pleasure, independence, confidence and awareness. Mastarna is rich, powerful and experienced. The scars all over his body are signs of all the sufferings he has gone through in his life. Pain , sorrow and rage haunt him as well as the ghost of his first beloved wife, Seianta. He seeks relief for his troubled mind defying death on any occasion. He wants to join Seianta.
Mastarna is so totally different from any other man Cecilia has known, he stirs her curiosity and shows her patience and respect. She wants to know more about him, his dark secrets. So she listens carefully to everyone who has known him longer than herself:  his mother Larthia,  his adopted son Tarchon, his best friend Ulthes and  his best friend's mistress Erene.
Cecilia's journey in the story will bring her through unexpected discoveries and shocking experiences which will convince her  that Fate can't be easily controlled - as she was wrongly led to believe - and that she finally must choose where her allegiance lies.

You'll be allured by the magic and beauty of the Etruscan world, just like Cecilia. Ancient history becomes life, love and passion in this novel.

The Wedding Shroud in now available both as  a paperback and in the e-book/Kindle format. Check out  all the possibilities  HERE. 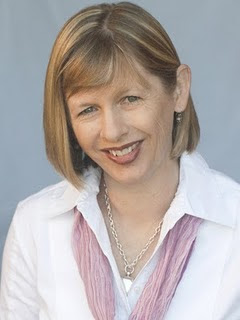 Elisabeth Storrs has long had a passion for the history, myths and legends of the ancient world.
She graduated from the University of Sydney in Arts Law, majoring in English and having studied Classics. She lives with her husband and two sons in Sydney and over the years has worked as a solicitor, corporate lawyer, senior manager and company secretary. At present she runs a consultancy business advising companies on corporate governance.
Elisabeth's first novel, The Wedding Shroud,  was researched and written over a period of ten years.  She is currently writing the sequel which will be released by Pier 9 / Murdoch Books in 2012.
Read my author interview .
Visit Elisabeth Storrs's site.


You've got a chance to get a signed paperback copy of The Wedding Shroud, leaving your comment + e-mail address. Open worldwide, this giveaway contest ends on August 18th when the winner will be announced. Good luck!

Posted by Maria Grazia at Tuesday, August 09, 2011
Email ThisBlogThis!Share to TwitterShare to FacebookShare to Pinterest
Labels: Books, From my bookshelf

Very much enjoyed the review and the Readings sample provided. I am an avid reader of Roman historians Tacitus and Seutonius and love Robert Graves' take on the Julio-Claudian dynasty, so am doubly intrigued by Elisabeth Storr's creation of an earlier moral Rome and its social divide with its much more hedonistic northern Etruscan neighbours. Thanks for sharing!

From the brief review this certainly sounds like a complex and fascinating book.

I would really like to read it so please enter me in the giveaway.

Thanks for opening it to worldwide entries.

Great review! This book has been on my wishlist for quite a while.

It sounds like a great read! I'd love a chance to win.

Love your review, MG and the book seems quite interesting too! I've been reading too much about Tudors and Plantagents in the last months and this could be a breath of fresh air for me....Ciao. A.x

I like historical fiction set in the Ancient Rome. I can say I'm really fond of it since I started reading Valerio Massimo Manfredi. Before reading his books I didn't thought that Romans could be material for novels... but I changed my mind. This book seems an interesting reading, so thank for the chance,
Claudia

fascinating time frame and plotline ~ thanks for introducing us & offering the giveaway!

Interesting plot, especially the characters. Thanks for the giveaway, I'd love to participate.

Thanks for visiting my blog, and I'm now your newest follower :)

This sounds like a very interesting book, thanks for the recommendation.

@MariaGrazia: your reviews are always so stimulating!! So I can't wait until I read the book and seeing that I'm the lucky owner of a signed copy of one of my favourite books I'd love to have another signed book. So enter me in the giveaway, please.
Let me add that I'm fascinated by people who are able to change their lives and do different things. So congratulations, Elisabeth!!!
maribea@tiscali.it

Another author to try to obtain. It has been a while since I've visited Rome (or Greece) in print. Been stuck in mediaeval world for a long time. Except for Paul Doherty's ancient murder mysteries.

Thank you for reference to another author,.

I read about this some time ago and it sounded so good.

Sounds like an excellent book! I'll keep my fingers crossed!

Great review, and thanks for the worldwide giveaway!!!

I'd love to be counted in. Thanks