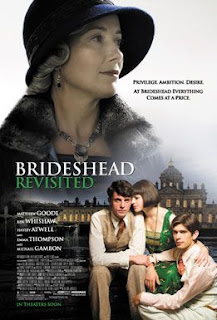 I'm sure it was an advantage. I've never read the book by Evelyn Waugh and only have vague memories of me bored to death by the endless 1981 ITV series  . I know this must sound rather unpopular but I like to be totally honest. I remember myself  trying to watch it in English with Italian subtitles but catching very little of the meaning of  the story and giving up watching the rest of it after a while . I apologize with all those who loved it,  I found it just terribly slow and boring. Maybe I should give it a try now that I am more experienced and ... older.  However, my almost total ignorance of what Brideshead Revisited meant in the past,  is why I could freely watch  and sincerely  enjoy the latest 2008 film adaptation written by Andrew Davies and directed by Julian Jarrold.   Without the burden of having to compare it with something else, I watched it simply  as a period movie, the latest addition to my DVD collection (thanks A.!) ,  set in a wonderful location I'd just visited in Yorkshire. I found it  good and I was definitely into it , its story, the characters and  the atmosphere. And I don't feel guilty at all!

Well, joking on one of the main themes in the story: the sense of guilt, the idea of sin, which dredfully influence and dooms the lives of the Marchmain children.

The aristocratic English Catholic Marchmain family, their spiritual torments, and their conflicted friend, Charles  Ryder  ( Matthew Goode) are the protagonists of this sad, nostalgic movie. Charles Ryder revisits and re-live his past arriving at Brideshead as a middle aged officer in the British Army during WWII.
That magnificent country residence had meant so much to him in his youth and he starts recollecting the glorious, joyful moments he spent there with his close friend Sebastian Flyte (Ben Whishaw) and his family: his elder sister Julia ( Hayley Atwell) ,  his younger sister Cordelia (Felicity Jones), his elder brother Bridey (Ed Stoppard) , his mother Lady Marchmain (Emma Thomson) and his Nanny Hawkins (Rita Davies) .

Charles is fascinated by the glamorous lifestyle of the family and as an unloved child, falls in love with the idea of being loved  and cherished by the Marchmain. Charles lives unforgettable moments at Brideshead and shares   the pleasure of freedom and immoderate drinking with Sebastian, He travels with his friend and Julia, visiting their father ( Michael Gambon) and his mistress (Greta Scacchi)  in Venice. Andrew Davies's script gives  hints about the homosexual nature of Sebastian and Charles's relationship (his own interpretation of the novel which is not at all direct nor clear as for the nature of the relationship) and makes Charles torn between his love for Sebastian and his strong attraction to Julia, which overwhelms him once in Venice. Sebastian's love for Charles, or better his sorrow at seeing his friend prefer his sister to him , will spoil the two youngmen's friendship and will lead Sebastian to alcoholism and self-destruction.

Lady Marchmain  seems perfectly nice, she’s pious, refined, concerned for her children’s well-being, and dealing quite wonderfully with the fact that her husband left her for another woman. On the other hand, she  is overbearing and manipulative and has always imposed her Catholicims and a stern vision of life to her children who strongly resent her. At first, she finds Charles sensible and polite, a good influence for the dissolute and sexually wayward Sebastian. But she can't bend him to her will. He is fascinated by her but sides with Sebastian ... "contra mundum". When Lady Marchmain asks Charles for help with Sebastian's addiction to alcohol,  he gives his friend money to buy drinks. Moreover, though Lady Marchmain makes it clear that he can't aspire to marry her daughter Julia, he goes on flirting with her.  He is not a Catholic, that's the main insurmountable obstacle to a union between him and Julia. She must marry a Catholic man and Lady Marchmain dismisses Charles and send him away from Brideshead. 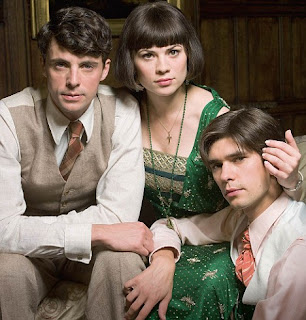 I'll stop my re-telling of the plot here. Many of you  already know what  the end of the doomed love-story between the protagonists is and remember the sad decline of fragile Sebastian. But this is not the aspect of the plot I was most interested in, though the love triangle was well acted and well written.
Though just glimpses to deeper questions, the themes of religion raised in the picture of the Marchmain family were very interesting . Among them the powerful scene of  the 'last-rites' argument  (Lord Marchmain's death scene) and the intensity of the tortured state of being raised from the cradle with an intense, overbearing Catholic conscience analysed in all the Flyte children's characters but especially in Sebastian's and Julia's.
Literary adaptations are always a problem: what to include, what to omit, how to communicate the thrust of the original in a cinematic interpretation. But those like me,  unfamiliar with the novel and the series may see this film as yet another English heritage story, with lavish settings (not only Castle Howard stately home , but also, Oxford looks wonderful as does Venice). Whether the film is, as some audiences have felt, an attack on Catholicism (or, at least, this narrower version of Catholicism) or not, films like this offer an opportunity for reflection and are a challenge to believers. 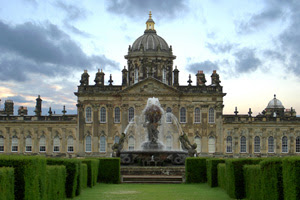 On a shallow note, it is undeniable that the real star is out of the cast : it is the wonderfully extravagant North Yorkshire country residence which was used as the set for Brideshead both in 1981 and in 2008:  Castle Howard. Even Julia doubts Charles's interest in her: "Do you really want me or do you actually want Brideshead and me, Charles"?
Posted by Maria Grazia at Wednesday, August 24, 2011
Email ThisBlogThis!Share to TwitterShare to FacebookShare to Pinterest
Labels: Costume movies, My DVD collection

The Buccaneers? I saw it a couple of years ago and even reviewed the series here on Fly High! I have to re-watch it: 1. because it is a wonderful costume drama adaptation of a beautiful novel 2. because I didn't notice Castle Howard the first time!
Thank you, Jenny. MG

Oh, you will have a whole new appreciation for the Buccaneers now that you have been to Castle Howard! It is used for the Duke of Trevennick's Country House.
A lot of the scenes where Nan is the Duchess are filmed there (like when she is looking at the Caravaggio and the big Christmas party scene). Oh boy, now I have to watch it again to see Castle Howard again!
And of course it is a wonderful miniseries.

@Jenny Allworthy
I can't wait to re-watch The Buccaneers now! Thanks again, Jenny.