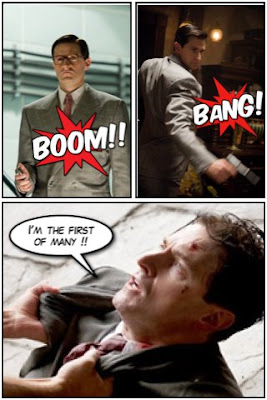 My husband didn't imagine what was going to happen  when,  as a joke,  he made a comic-strip (above)  with pictures of Heinz Kruger from Captain America using his IPhone and sent it to me via mail. Poor him!  I started sending him pictures of other roles Richard Armitage played and asking him to make others. I chose the photos, wrote the captions  and ... you can't imagine what a pain in the neck I have been.  Or better, maybe, some of you can!
Well, he and his iPhone helped me to create these comic cards dedicated to some of RA's characters. I've posted them on facebook and twitter from time to time, so you might have already seen them. Today I've decided to put them  all together in one post , here on Fly High, adding  a brand-new one at the end. Discover which of RA's characters it is dedicated to. I hope you'll like them all and, remember, they are just for fun. 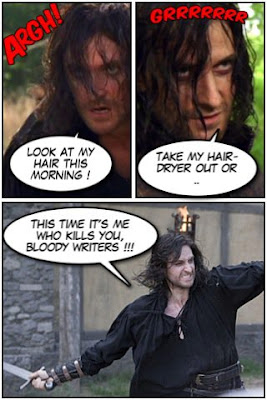 LUCAS - LOOKING FOR A NEW JOB 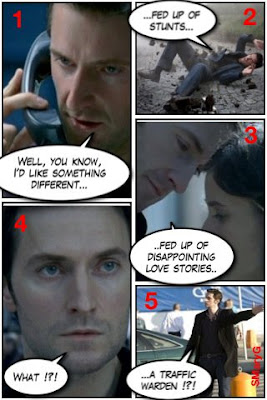 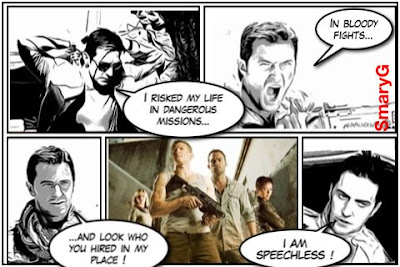 THORIN - ALWAYS YOUR LOVELY ONE! 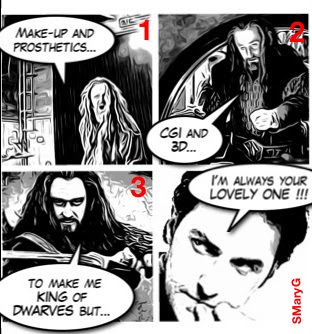 Fell off the chair laughing; dropped the laptop on the cat's head again. Too funny, MG!!

@fitzg
Glad you like them but ... Mind your cat, please! :-) (Laughing at the scene you've just described!)

Hilarious! Wish my phone was this smart (but I am too cheap to buy one...)

Where can I get some? LOL!

These are great!!! I want to make some! Can I borrow some for later, pretty please?

@C. Allyn Pierson
Mine doesn't take pictures either. It's one of the simplest types on the market. But it's enough for me. I often forget I have one and keep it off in my bag :-( The IPhone is my husband's. He loves to use it. Too complicated for me!

@Phylly
You can borrow some, of course, Phylly. But.. Remember me, while using them :-)

Cat is only working on her second life, MG. Seven to go...

@MG -- Of course I would give you all the credit! Thanks! I'll let you know when I finally have a post ready. I am so behind it isn't funny!

Love Antonio... funny how the husbands get it, isn't it? They're the ones who keep the perspective. Love you too MG!

LOLLLLL! I especially like the JP one: how true!
BFN,
xx K/V

@fitzg
:D You and your lovely cat are a great pair. I bet she's a "RA-appreciative female", too.
@phylly
Thanks. And... don't get stressed, remember: Blogging must be fun!
@Prue Batten
Yes, you are right, funny how he gets it, especially because he is jealous of Richard -though he would deny it till death! But he is also infinitely patient and very talented with his IPhone :-) Love you, too, Prue!
@K/V
So ...you are going... and never to come back? Oh ...are you!?! Joking. Have a safe journey! I can't wait for your impressions and pics. Don't think of JP these days, you might turn melancholic. Better to focus on Monet, GoG or ... LG! :-)

Aww the last one in particular really made me smile, but they're all great! :)

@Traxy
Thanks a lot, T. Is Thorin your favourite RA character or do you like it as a whole?

Awww, loved the last one. How could he think prosthetics would change anything ;)

@onemorelurker1
You know, Richard tends to embody the character till he convince himself he is that character. Hence... he must remind himself, more than us of ... how lovely he is ;-)

They are all great! You really made me laugh :D

@Summer
And you make me happy with your positive comment! :-)

They are FANTASTIC - and what a husband ;-)

@alfie
Many thanks from my gloating husband ;-) He's promised to go on helping, but said that ... when he meets Richard, he has something very serious to discuss with him one-to-one :O
*rolls eyes*

Okay I totally had another character in my head! Maybe for the next edition of collectibles. :)) Tell Antonio he's very talented .. Could make a few bucks too as collectables ;-)

That made me smile & I totally guessed wrong .. I guess I don't have Thorin that much on my mind? Tell Antonio he's very talented, created some valuable collectables here ;-)

@Phylly3 can't wait for that waterfall of posts :))

Great work : lot of fun ! thanks, especially the one with the hair : hilarious !
So now, RA makes also the husbands very creative !!! excellent ; )
Jos2507

What a wonderful team for comic stripes you and your husband are. Please continue !!!

Oh Cod, these are hilarious and brilliant. Why am I only discovering them now? Well done - you obviously have a man who loves you ;-)