AT THE CINEMA - A DANGEROUS METHOD, FROM VENICE TO ROME 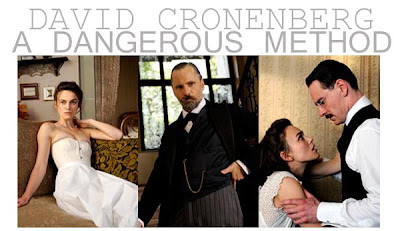 I was really interested in this movie, do you remember? (My previous post) Fortunately, many of the movies shown at Venice Film Festival 2011 have got to Rome and are being shown these days in a few of the central theatres. My friend K/V and I were lucky enough to get two tickets for "A Dangerous Method". Actually,  she queued up under the sun in a hot summer afternoon to get them. I simply took  a bus, an underground train and joined her. So kudos to her for discovering it was on and bravely facing the hot and the queue. Was it worth every single drop of sweat? Well, I'm glad I was there in Rome last night, in that crowded movie theatre in Via delle Quattro Fontane: I'm also proud I saw this film and I can tell you about it. Did I like it? Go on reading and judge yourself.  I can tell you what I was not. Disappointed. 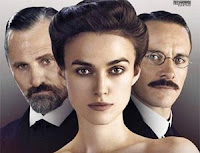 A Dangerous Method starring Keira Knightley, Michael Fassbender , Viggo Mortensen  and Vincent Cassel is an intense,  thought-provoking, deep analysis of the relationship between young  Carl Jung (Fassbender)  and his mentor, Sigmund Freud (Mortensen) . The relationship between the two men , little by little, comes to a clash, also due to the difficult,  fascinating case of  a beuatiful woman, a Russian Jew, Sabina Spilrein (Keira Knightley, who doesn't play the ingenue giggling all the time for once) , whom Dr Jung meets as an inmate at his hospital. The young woman's been driven mad by a violent father and has developed hysteria and psychosis. The woman is endowed with  a  brilliant brain and dreams of becoming a doctor. This is what Jung will help her to become. 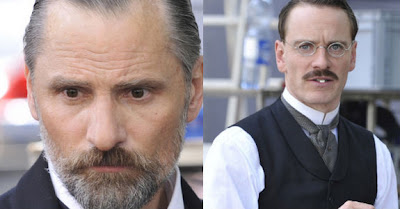 The reason of Jung and Freud's  difficult relationship is also based on their different views on psychoanalisis. Freud thinks Jung's line of analysis is too influenced by supposition and coincidence. Jung, for his part, thinks his master has sex on the brain. Their paths must inevitably part, in the end.
This film is  a new occasion for its director, David Cronenberg - also known as the King of Venereal Horror or the Baron of blood -   to dig into human beings and their truest side, their subconscious, the hidden side. Cronenberg seems actually devoted to discover and depict the complexity of  human beings with their fears, neurosis, violent instincts and obsessions (Crash, A  History of Violence, Eastern Promises).
Beside the famous pair of psychiatrists,  forcefully acted by Fassbender and Mortensen, the two female characters, Sabina Spielrein and Jung's wife Emma (Sarah Gadon)  ,  are strong and brave and so much less hypocritical then the male figures. They seem the ones who lead the game, actually.
All the characters talk much about freedom and long for it, but it remains a truly difficult goal to achieve for all of them. Jung is caught prisoner in his web of proud certainties and struggles against his longings, wishes, desires, instincts and feelings. He is an ambition - driven man who seems quite incapable of real affection.
He idolised Freud but then, meeting him, he gets to destroy the authorative image he had built in his  mind. He doesn't want to renounce his personal beliefs in favour of Freud's.
Freud too seems rather  self - focused and proud,  he too seems incapable of true feelings of generosity or friendship.
This is why the two women come out as real brave heroines. They are first of all generous . Sabina in her passionate surrender to her saviour, Emma by trying to give her uncaring husband what she thinks could make him happy: a solid family, an heir or a boat . They show their fragilities without compromise, they sacrifice their pride for love.

Finally, Vincent Cassel  gives a brilliant  performance as Otto Gross. He should be cured by Dr Jung but ends up helping him,  instead, to free his real self.  Otto Gross is a champion of anti-psychiatry and sexual liberation, he also developed an anarchist form of depth psychology (which rejected the civilising necessity of psychological repression proposed by Freud) and abused drugs like cocain. He really was a patient Jung treated more as a colleague and who betrayed his trust escaping from the hospital.
On the whole I found this film very interesting, thought provoking and deep, though lacking the sparkle who usually enlighten my sympathy for the men and women in the stories. Everything was ... well made: well written, well acted, well directed, well shot . Then beautiful photography, costumes and locations. What it lacked was... the sparkle. I mean,  overwhelming emotions. Yet all the suffering narrated, those painful stories told should have conveyed some. Freud will forgive me  if I say ... beautiful but  frigid. 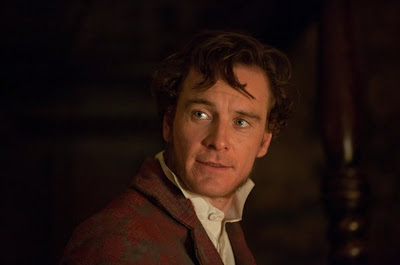 P.S. It's Fassbender's magic moment! He won as Best Actor at Venice Film Festival with Shame, he was there  also as Jung in A Dangerous Method, he is the latest Mr Rochester on the big screen in the UK these days and coming soon to Italy, too (Jane Eyre 2011).

I abslutely agree with your... analysis, MG :) Maybe that's why in the end I got a not-so-positive feeling about the film, despite its beautiful photography, its costumes, its interesting story and its good actors - except Keira K., who IMHO is painfully and vainly overacting: no way, she can't act!
K/V

Hi MG, I haven't seen the film yet but I don not think I will bother going to see it. I'm not interested in the subject, I do not like the actors much (apart from Fassbender who is a great Mr Rochester - went yesterday to see Jane Eyre and I really liked it!)and if you and K/V had recommended it I might have tried it ...but I think I'd rather save my money for Tinker Taylor Soldier Spy that's coming out today...Have a nice weeekend. Ciao. A.x

@K/V
I didn't mind Keira Knightley in her role in this film. It was not an easy one and she was good. What I didn't like, was the thing as a whole. Every little piece was ok, but the final picture didn't come out as good. I'm still pondering ...
@lunarossa
Hi! Hope you're feeling better, A. I didn't say I didn't like it at all. It was an interesting , thought provoking film. Again, I can't say exactly why I'm not enthusiastic, mildly positive. However, I was and I am interested in the themes and characters of the film. I usually have to link Freud's psychoanalysis to the rise of the modernist novel in my lessons about the 20th century, so watching this film has been a useful experience which added new fuel to my previous knowledge, highlighting the men behind the ideas.

Oh so I get from the introduction, you like it (or probably loved it!). I skipped the rest because I don't want to read spoilers as this movie is in my 'to watch' list since a friend on twitter showed me the trailer.
I'll have to wait some time though, because it will be released here in November :/, still is good to know I won't be disappointed.

@onemorelurker
I was not enthusiastic but I liked it. It is really interesting. It hasn't been released in Italy either. I saw it in the original version in this event which has brought films from Venice Film Festival to Rome this week.
Let us know what you think about it when you see it!
Thanks for your comment. Have a good weekend!