MORE THAN LOVE LETTERS BY ROSY THORNTON - MY REVIEW 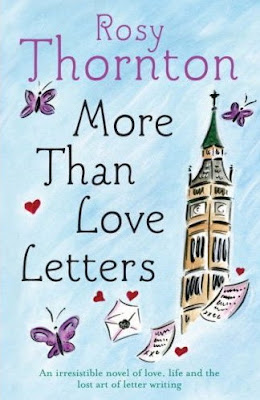 Love comes in the most unexpected, mysterious ways. The more you plan, the least you obtain (Have you read Jennifer Ziegler's guestpost "Kismet and Kisses"?) When Richard Slater MP receives a series of letters of complaint from one of his female constituents, he's sure she is an insane old biddy who must be avoided at all costs. He really doesn't fancy meeting her face to face. But Margaret Hayton, twenty-something,  is not easily fobbed off, she's brave and stubborn,  and above all she's not afraid to stand up for her beliefs.
How does she figure Richard Slater out in her mind while insisting writing to him? Of course, as a stiff and stern, prim and proper, middle-aged politician who tends to snob ordinary people's little and big troubles. Do you sniff out love in the air? The game of first impressions? Yes, totally right.
Against all reason, Richard invites Margaret to attend his next constituencey surgery and when he sets eyes on her dark ringlets and huge eyes, he risks losing his heart, his head and quite possibly his political career.

Margaret, the daughter of a clergyman,  loves her gran and writes her beautiful letters about every little thing in her life. She also exchanges e-mails with Becs her best friend, whose great aim is working her way through the men of Moss Side in alphabetical order, and kindly bears Cora's, her landlady,  extravagances.
"More than Love Letters", as the title says,  is not simply a romance, it is a book about life with its farcical, complicated, touching and even tragic moments. It is made up of letters, articles, newletters, reports, e-mails which result into a realistic portrait of a variety of unforgettable human characters.
The authoress is Rosy Thornton , who was my guest here on FLY HIGH more or less one year ago. On that occasion she revealed how the inspiration for More than Love Letters - which was her first novel - came to her. Do you remember? It was watching BBC North and South in 2004. She had never meant to become a writer but that period drama changed her life. Rosy said:


"The voice I discovered was contemporary and humorous – quite different from the historical one, imitative of Gaskell, that I had used for my fanfic. But the story I found to tell owed a lot to North and South. The heroine of my first novel, More Than Love Letters, is a clergyman’s daughter, and actually named Margaret by her father after Margaret Hale in North and South. My Margaret is very much a Victorian heroine out of her time: all pale skin and dark curls and burning moral zeal. Like Gaskell’s Margaret, she moves to a new town where she meets – and eventually falls in love with – a man considerably her senior who is already an established figure in the community. My hero is not a mill owner and magistrate but the town’s MP – and it’s no coincidence that his name is Richard. No prizes for guessing whose picture was in my mind as I was writing the book!" 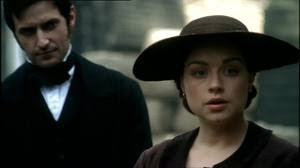 Read what she wrote about North and South, Richard Armitage and her writing career in that post.


CLICK HERE
Posted by Maria Grazia at Friday, September 09, 2011
Email ThisBlogThis!Share to TwitterShare to FacebookShare to Pinterest
Labels: Books, From my bookshelf

May your special day be filled with memories and flowers, friendship and happy hours.