A THOUSAND GLASS FLOWERS BY PRUE BATTEN - MY REVIEW 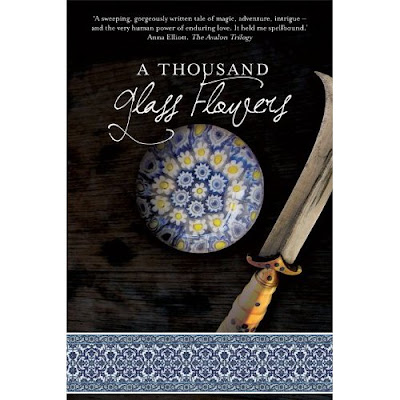 “The island existed in a watery palette of colours, washed as if there was a veil of organza between the scene and the eye of the beholder. Often there were mists and at night it became hoary as a frost, in shimmering greys and silvers. But a profound harmony existed, with no care or trouble or very little that would disturb souls that had come.” (p 150)

I know it may  sound exaggerated,  but words can make fantasy true to our mind eye. Finely-chiselled, preciously embroidered words can materialize what we only dare fancy about. Prue Batten is very good with words, her talent to create characters and places and  to make them true to her readers is undeniable.
Imagine the magic,  exotic world of  “A Thousand and One Nights”.  Add a dark, damaged, doomed hero whose  attractiveness is magnified by his power to mesmer. Make him engaged in an adventurous quest to save not only his dear but the whole world from his wicked antagonist. Let him meet an extraordinarily beautiful,  brave young woman and join forces with her in his fight. Accept that they discover and face their fate,  united against their evil opponent. Enjoy their magic company of djinns, afrits, siofras. Prepare to a thrilling ride through bittersweet, romantic, gothic, tragic, funny, frightening, moving moments.  Do you think you can make all that?
A visual clue? 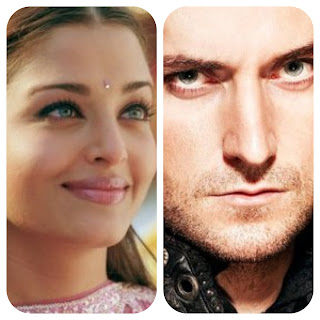 Tha author, Prue Batten revealed that  Ashwariya Rai became the embodiment of her female protagonist and Lalita, her name, comes  from Bride and Prejudice the  movie in which she’s the protagonist. Richard Armitage’s appearance, especially after watching him in Robin Hood, totally became Finnian in her mind  (from Mesmered's Blog)


The two protagonists are two lonely souls, brought up experiencing very  little love in their lives. Fear has always  been their mute only companion in their respective solitudes.
Finnian was raised by his grandmother, Isolde,  who hated him and punished him with her whip at  any little sign of disobedience.
Lalita was left to the care of her loving uncle and aunt after her parents’ death. But while her caring uncle and aunt were away on business,  she was left with her greedy, wicked uncle Kurdeesh who sold her to the Grand Vizier for the Sultan’s harem.
Lalita is a scribe with stunning talent in her craft. She can’t renounce her freedom, she can’t bear being taken as a slave in that golden cage which is the Sultan’s harem. Moreover, her beauty and her talent soon bring enemies to her among the other women there.
Finnian is a Faeran, one of the Others. He can mesmer and make himself invisible. “An eye for an eye” is what he believes in. He doesn’t believe in Fate, but he will have to change his mind. He has no other ambition in life that revenge against his evil grandmother. He doesn’t feel guilt or regret. In order to totally defeat Isolde,  he has to find the magic Cantrips and then destroy them . But then he meets Lalita and his task becomes even harder.
“A Thousand Glass Flowers” is a magic tale which has hold me hooked not only while reading it but even after that. It was not so easy to get out of its atmosphere, leave Eerie or farewell Finnian and Lalita. They stay with me as unforgettable. I’m sure they’ll stay on for long. In my memory and in my heart. 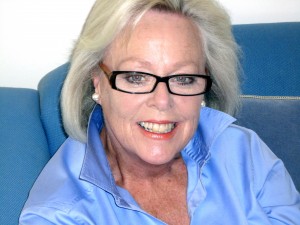 Here is how Prue loves to introduce herself ...
"The best way to describe myself would be to use a quote written about me by Mark Williams on a recent blog
Here it is: ‘She lives in Tasmania, has a pet Tasmanian Devil called Gisborne, eats kangaroos’ testicles, has the most ridiculous one-star ever awarded on Amazon, and wrote a novel on Twitter…’
Believe it or not, most of it is true. My husband and I own a farm so we do have lots of kangaroos around, but the testicles? Ugh! As to the Tasmanian Devil? I wish I did have one for a pet, but as recently reported in the Huffington Post,  the poor little things are suffering the ravaging effects of a disease that is bringing them to the edge of extinction. Better the scientists and conservation zoos look after them than me. And I do have a one star rating on Amazon… a woman bought my first book thinking it was an embroidery book despite the blurb and then gave ME a one star despite HER mistake. And yes, myself and 50 others wrote a Jane Austen style novel on Twitter, [(#A4T) http://www.austenproject.com] which was mentioned by The Times (UK) no less as it took off earlier in the year".
Follow  Prue Batten at Mesmered's Blog
A Thousand Glass Flower is available in the Kindle edition
N.B. On September 7th,  Finnian, the fascinating hero of A Thousand Glass Flower will be my guest here on FLY HIGH! Don't miss my interview.
Posted by Maria Grazia at Thursday, September 01, 2011
Email ThisBlogThis!Share to TwitterShare to FacebookShare to Pinterest
Labels: Books, From my bookshelf, Richard Armitage

Wonderful and insightful review, MG! Altho I don't comment often, I love your site and always look forward to what you have to say about the latest and greatest!

@NovemberBride
Thanks a lot! You are always welcome on Fly High, with comments or not.
@Sam
Yes, it is an incredibly well written, wonderful tale. Thanks for your comment.

I think you can dispute reviews - or at least you could report it to Amazon as being off-topic or something like that.

Sounds like an interesting book. Will probably have a look at it once I finish reading The Stumpwork Robe. :)