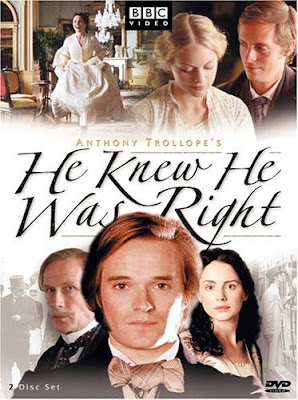 I have wished to see this series since I interviewed Lara Parmiani for Fly High (HERE). Lara is an Italian actress living in London who had a small part in it.  It took me some time but I did it, at last. I liked its really Victorian atmosphere and its quite original plot. Honestly, I preferred the subplots to the main one but , on the whole, I   found this mini-series very well done and acted.
He Knew He Was Right is one of Trollope's best but least-known novels. Trollope based his 1869 novel on Shakespeare's Othello, but expanded the Bard's tale of sexual jealousy into 1,000 pages of enthralling Victorian plot twists, featuring child abduction, a private detective (one of the first in literature) and a cast of remarkably liberated women. This 2004 mini-series   was first broadcast on BBC  then , after a couple of years also on PBS Masterpiece Classics. My DVD has also got an interesting one hour's dramatized bio of Trollope.

Louis Trevelyan (Oliver Dimsdale), a wealthy young landowner , while visiting the Mandarin Islands, falls in love with the Governor's daughter Emily Rowley (Laura Fraser). After marrying, the couple return to England with Emily's sister Nora as a companion. Prone to jealousy, Louis forbids his wife from entertaining Col. Frederic Osborne (Bill Nighy), an old friend of her father, who has something of a reputation in London for flirting with other men's wives. Emily stubbornly refuses to obey on a matter of principle: that Louis is slandering her character by making such an order, and he becomes groundlessly but uncontrollably jealous, beginning to distrust everything his wife does. In despair at his constant irrational suspicion, and mindful of the health of their small son, Emily finally leaves Louis, which action precipitates his rapid mental decline. He kidnaps their son and flees to Italy where he has a complete breakdown. Emily is forced to act...
This is the main plot line in the series,  but there are others which are definitely more enjoyable, either because more involving or because more amusing. I liked the troubled romance between Nora (Christina Cole) , Emily's sister,  and Hugh Stanbury (Stephen Campbell Moore), for instance. Nora refuses a very advantagious proposal from wealthy Charles Glascock (Raymond Coulthard) , the eldest son and heir of Lord Peterborough,  and lives in hope to marry Hugh who can count only on a precarious living as writer of  articles for a newspaper.
Another subplot involves Jemima Stanbury (Anna Massey), the capricious, formidable spinster aunt of Hugh. In her youth, she had been engaged to the eldest son of a leading banker. They had had a falling out and parted company, but upon his demise, he had left everything to her, making her very wealthy. Aware of the poverty of Hugh's branch of the family, she had generously paid for his education and helped him get a start in life. However, when he chose to work for what she considered to be a radical publication, the staunch Tory withdrew her support. She then
offers to accept one of Hugh's sisters as a companion. After some debate, timid, unassertive Dorothy Stanbury (Caroline Martin) is sent. Aunt Stanbury wants her to marry Mr Gibson (David Tennant) , but the unpleasant clergyman is someone Dorothy stubbornly refuses risking Aunt Stanbury's love, support  and inheritance. Dorothy will struggle against the old lady's will and will accept the proposal of Brooke Burgess (Matthew Goode), the nephew of Aunt Stanbury's fiancé, she has now chosen as her only heir.

The most exhilarating plot is related to Mr Gibson, the vain greedy clergyman who refused by Dorothy,  surrenders to the idea of being courted by two sisters, Arabella and Camilla French. The two sisters fight for his attention at any cost. The feud will lead them to tragicomic situations.
I have to give kudos to Andrew Davies for his excellent job in adapting Trollope’s long novel and to the whole cast for their excellent performances.
Well, if you love Victorian novels and costume drama, this one must be added to your DVD collection and, if you haven't seen it yet... what are you waiting for?
Anthony Trollope
He Knew He Was Right on Youtube
Posted by Maria Grazia at Sunday, September 11, 2011
Email ThisBlogThis!Share to TwitterShare to FacebookShare to Pinterest
Labels: BBC Drama, Costume drama

I watched this last year and really enjoyed it. I was a bit startled by the ending, but wasn't bothered... too much. :) I think I remember feeling the same way about liking the subplots more, which is so unusual for me.

@Mary Gray
Well, Traveley is such an unsympathetic character, you can't really feel for him. I was really sorry for Emily, but she is so strong and reacts so bravely that you admire her without actually sympathize with her.
I hope it makes sense. I doubt my English when it comes to subtleness. OK, Thanks for dropping by and commenting, Mary. **Hugs**

I watched this series just this year, too. I like the sub-plots, but the main plot was heart-wrenching. I don't know, but ever since I visited our city's asylum, I never wanted anyone to be mad. I wonder if he could have been saved had it happened in our times.

I think that people prefer the subplots because they are funnier and have a happier ending. But I don't think it's a good idea to sweep Emily and Louis' story under the rug. I thought it was very well written and tragic. And it took an interesting look at Victorian paternalism and marriage.

I sympathized with Louis. Well, I felt sorry for him by the end of the story. But I also believe he only had himself to blame.