This is an event hosted by Jenny at TakeMeAway . It is a weekly corner to write about good reads from the past. Those books we so much loved and we don't want to forget. This week a literary jewel, a novella by Fred Uhlman , REUNION, in Italian "L'amico ritrovato". 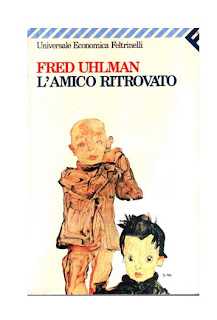 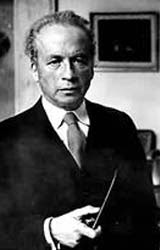 Fred Uhlman was a lawyer by profession. He was a German  of Jewish origin. He was born on 19th January 1901 in Stuttgart, Germany.
'Reunion', his novella, was published in English in 1971 (in Italy , 1977). Arthur Koestler, in his Introduction to the book, called it "a minor masterpiece". "Hundreds of bulky tomes have now been written about the age when corpses were melted into soap to keep the master race clean; yet I sincerely believe that this slim volume will find its lasting place on the shelves."-- he wrote.
This short novel is a story of adolescence and frindship between two boys, whom history, that is, the rise of Nazism , separates and ultimately destroys. The narrator , Hans Schwarz, is the son of a Jewish doctor and the grandson of a rabbi, and forms an intense frindship with Konradin von Hohefels, the young aristocrat in his class. A year later everything is over . Nothing remarkable between the two adolescents has happened, except that it is 1932 and Hitler has seized power in Germany...

(the poster of the movie, screenplay by Harold Pinter from Uhlman's novella, 1989)
This is a touching little book from my bookshelf that I love reading in the original version with my students, when they don't read it in our mother tongue with their Italian teachers. It's only 70 pages. Perfection is reading also "No coward Soul", the twin novella published in 1979, which tells the same story , this time from Konradin von Hohefels's point of view. Only this way you can actually understand REUNION.
Just a brief quotation:
"I don't know where I read that 'death undermines our confidence in life by showing that in the end everything is equally futile before the final darkness'. Yes, 'futile' is the right word. Still I musn't grumble: I have more friends than enemies and there are moments when I am almost glad to be alive. When I watch the sun set and moon rise, or see snow mountain tops."
Fred Uhlman died in London on April 11, 1985.


REUNION AT AMAZON.COM
REUNION THE MOVIES (1989)
Posted by Maria Grazia at Thursday, March 04, 2010
Email ThisBlogThis!Share to TwitterShare to FacebookShare to Pinterest
Labels: Books, From my bookshelf, Throwback Thursday

This sounds very good! I'll try to find time to it in the future!

Again, another book I have never heard of. I tend to avoid Holocaust literature these days (way too depressing) but might have to make an exception here. I love the ides of two stories documenting each boys perspective.