WHAT I HAVE BEEN WATCHING ... 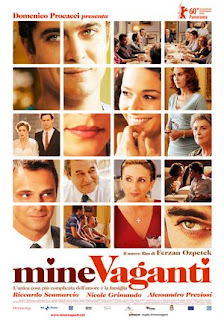 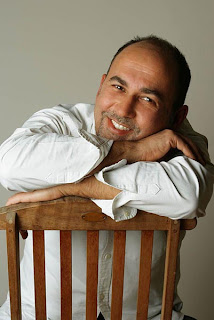 I love Ferzan Ozpetek's movies and I love his courage. Not  easy to find the courage to be honest in the showbiz. Any of his movies is an exciting (often gripping) adventure in the depths of the human soul. A difficult path, often uneven, but always honest, truthful and tending to spirituality. Love and diversity (Le Fate Ignoranti, The Ignorant Fairies 2001), passion and civil awareness (La finestra di fronte , Facing Windows, 2003),  love that thanks to charity gets to faith (Cuore sacro, 2005), love and friendship (Saturno contro,   Saturn in opposition, 2007). Ozpetek turns around his favourite theme catching different nuances and different perspectives each time. Also in the movie I saw at  the cinema at the weekend, his just released MINE VAGANTI,  there are troubled, hidden or impossible loves that destabilize the traditional balance of  a family group. The family bonds are not loosen  but freed from old habits and falsity. The new tone Ozpetek has chosen this time is the light touch of comedy: you laugh all the time but you are touched and moved to tears at the same time. You laugh at homosexuality but you deeply feel the troubled effort of the protagonists at pursuing their idendity, authenticity and  freedom. 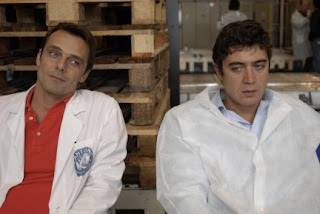 The story. In the South of Italy, Lecce, the Cantone family is well - off and respected. Vincenzo Cantone, the father, runs a pasta factory with his elder son, Antonio (Alessandro Preziosi above on the left). The younger son , Tommaso, lives and studies in Rome (Riccardo Scamarcio above on the right). Tommaso is back home to tell his narrow-minded,  prejudiced father all the truth about himself: he is not studying Economics and Marketing but Literature at university, he doesn't want to continue the family tradition in the factory but to become a writer, he is not someone his father can like... he is a homosexual. He tells Antonio, his brother, everything first. At the family reunion around  the table that night,  Tommaso is ready to reveal everything but Antonio comes first: he doesn't like working at the factory, he wants to leave. He is not who everybody thinks he is, he is a homosexual. 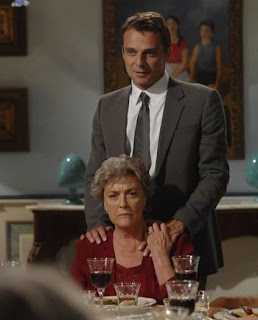 Their poor father, Vincenzo,  has a stroke and is brought to hospital . So Tommaso won't have the time nor the will to speak out his own truth. Antonio is sent away from home and from the family  business . Now Tommaso must take his place and help his father. 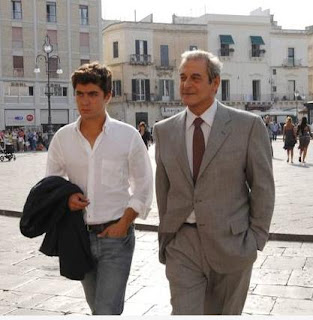 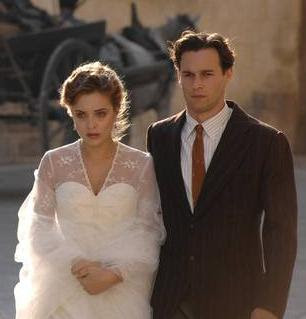 This is just the beginning of the story which stars a brilliant cast of Italian actors among whom splendid Ilaria Occhini, the grandmother, the "mina vagante": she knows what an impossible love is. She is poetry in this movie.  Talking to Alba (Nicole Grimaudo) who is in love, unrequited, with Tommaso,  the grandmother says: "I know what an impossible love is. Impossible loves never end because they last forever". She has loved  - all her life -  her husband's brother and has lived all her life keeping her painful secret inside.
She is the only one who knows Tommaso's and Antonio's secret, without them revealing it. She teaches to them that life isn't worth living if you try , always try, to do  what the others want you to do.
Basic philosophy for a great character.
Cast and Credits
Official site
ON ITALIAN TV - SISSI


As I did for S. Agostino, last week, I recorded this mini series, cut off all the ads in it, and watched it this last weekend when I found some spare time to enjoy it. It is another international ( Italian/Austrian/German) production which makes me re-evaluate our state TV, which I usually carefully avoid watching. 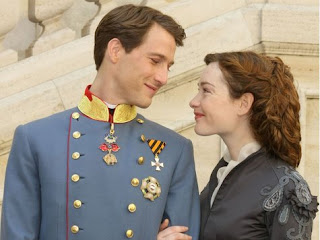 Young Elizabeth of Bavaria, empress of Austria, has always been better known as "Sisi". She’s probably one of the most popular and loved female figures in European history. She influenced the political scene of her time though history was made by men –and still is - by men. 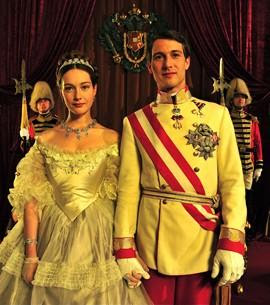 This two- part TV series tells her story, not as a fairy – tale (do you remember Romy Schneider’s Sissi?) but in a more realistic way, focusing on her troubled journey from her happy free childhood to being a wife, a mother, the empress of Austria.
The romantic story of her meeting with Franz Joseph, Emperor of Austria and her cousin, soon turns into the dramatic account of her living at court with her mother-in-law and aunt forcing her to repress her desire for freedom and independence . Their relationship is the first cause of Sisi’s unhappiness. 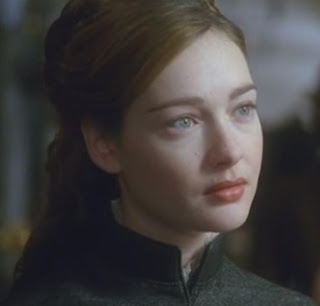 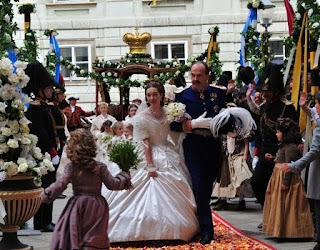 Then, the Empire her husband rules is going through a deep crisis: several territories (among which Lombardy and Veneto in Italy or Hungary) ask for their autonomy and independence. She will be asked to share Franz Joseph's destiny through tragedy.
I loved this mini-series, more than  Romy Schneider's  cult film, especially because it shows the human side of the fairy-tale, which loses its magic but acquires the taste of a dramatic but beautiful account of a life. The life of a great woman.
THE CAST : Sissi Cristiana Capotondi , Franz Joseph David Rott , Arciduchess Sofia Martina Gedeck , Count Andrassy Fritz Karl , Ludovica Licia Maglietta , Countess Esterhazy Fanny Stavjanik , Nené Christiane Filangieri , Maximilian Xaver Hutter , Max Herbert Knaup , Radetzky Friedrich von Thun , Ida Ferency Katy Saunders , Napoleon III Erwin Steinhauer , Eugenia Andrea Osvart , Charlotte of  Belgium Federica De Cola .
The official site at Rai .it
Elisabeth of Bavaria
Posted by Maria Grazia at Monday, March 15, 2010
Email ThisBlogThis!Share to TwitterShare to FacebookShare to Pinterest
Labels: At the cinema, Costume drama

The story of Sissi is so intriguing -- I've always been fascinated by her, so i hope that series eventually makes it to us the in the States (subtitles and all!).

Hi, K! I'm so glad to hear from you! Well, reading your lovely blog I'm well updated about the great events in your life, but I'm actually glad to meet you here. You've become addicted to Spooks/MI5?!? Something I can totally sympathize with. You'll love Lucas North and series 7, then, I'm pretty sure. Looking forward to your reactions!

Poor Sisi...I used to love watching the movie growing up. When I read her story though, years ago, I came to understand how much of a troubled soul she was. I can't believe it played on RAI- and I missed it!- I'm disappointed..
Thanks for the movie reviews:)

I'm sorry, Lucy. It was on RAI 1 on 28/2 and 1/3. As I wrote, I just saw it at the weekend after recording it. I'm sorry you couldn't see it. It is a good adaptation.Thanks for commenting!

HI MG, Although I've got a satellite dish I always forget to watch Italian TV and I'm ever so sorry when I miss something good like that. Mine vaganti (Loose Cannons in English) was shown at the Turkish film festival in London a few weeks ago. I doubt it will arrive here in York, unfortunately. I will have to catch up with it next time I go to Italy. With regard to Spooks, I'm still recovering from Ros being blown out last series and I'm not sure I will watch it again! First Adam (my heart broke!), then Jo and now Ros. Awful. All the best. Ciao. A.

Loose Cannons?!? Doesn't it sound better in Italian? Anyhow, thanks for the translation. it may help my English speaking readers, of course!
As for Spooks, as far as Lucas North is alive, my heart can bear any other deception. Am I too selfish and unsensitive? Maybe. ;-) But that's how I feel. They are shooting series 9! Ciao, A. e grazie!