I'm glad to introduce the author of  the Mr & Mrs Darcy Mysteries, CARRIE BEBRIS, to all of you. Today the fifth book of the series comes out. It is based on Jane Austen's EMMA . Can you imagine Elizabeth Darcy and Emma Knightley together? Walking arm in arm all taken in their gossiping about insufferable Mrs Elton... And have you got any idea of what can happen if Mr Darcy and Mr Knighley join their forces to solve a mystery? Well, better to say more than one ...THE INTRIGUE AT HIGHBURY can feed your imagination...  Here's to you Carrie Bebris introducing herself and her latest work . 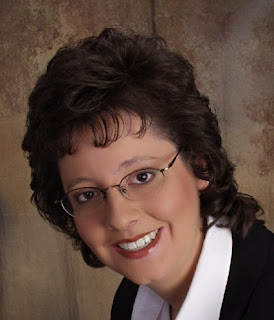 Thank you, Maria Grazia, for inviting me to write a guest post introducing myself and my series. I am happy to be here!

I am an American writer with a love of all things British, especially British literature and history. After publishing two novels in the fantasy genre, I decided to switch to historical mysteries. As the mysteries I most enjoy reading usually involve some sort of literary connection (such as A.S. Byatt’s Possession and Jasper Forde’s The Eyre Affair), I wanted a premise that somehow referenced my favorite author, Jane Austen. I also enjoy mysteries involving couple sleuthing teams who engage in lively banter while solving crimes, such as The Thin Man’s Nick and Nora Charles.
This was ten years ago, before Austen paraliterature had practically become a genre of its own. I explored many ideas, but eventually found inspiration in the the hero and heroine of Pride and Prejudice and how they deal with the crisis of Mr. Wickham’s elopement with Elizabeth’s sister Lydia. Elizabeth, a strong observer of character, predicts Lydia’s disgrace; Mr. Darcy, a man of the world who knows how to get things done, tracks down the couple and makes the marriage happen. I thought, if Elizabeth and Darcy make such an effective team before they get together romantically, imagine what they could do afterward.
That became the premise of the Mr. & Mrs. Darcy Mystery series. The newlywed Elizabeth and Darcy become reluctantly involved in mysteries affecting their family and friends. In the series debut, Pride and Prescience, Caroline Bingley becomes embroiled in an intrigue only the Darcys can solve. Successive books (Suspense and Sensibility, North by Northanger, The Matters at Mansfield, and The Intrigue at Highbury) bring the Darcys into contact with characters from Austen’s other novels. I am currently writing the sixth book of the series, based on Austen’s Persuasion.
The newest Mr. & Mrs. Darcy Mystery, The Intrigue at Highbury (Or, Emma’s Match) is how I met Maria Grazia. When I offered several advance reading copies of The Intrigue at Highbury as giveaways in last year’s Everything Austen Challenge hosted by Stephanie’s Written Word, Stephanie asked whether I wanted to limit the contest to U.S. readers or open it up to international readers as well. Without hesitation, I chose international. I have a fair number of readers around the globe, and I definitely wanted to include them! In particular, since TEA Books began publishing my Mr. & Mrs. Darcy Mystery series in Italian translation, I have developed a growing Italian audience. I love receiving emails from my Italian readers; they are always so full of warmth that it is like receiving a spot of Italian sunshine. So I was delighted to learn that one of the winners was Italian. I happily sent her a copy of the book . . . and I look forward to learning what she thought about it. 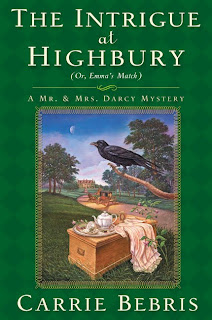 Well, what can I say, Carrie? It was such a pleasure to be back at Highbury ,thanks to you! I just went through the pages and thought "How nice! What a delight! Great device! Good point!" all the time. Honestly, I haven't read much Austen paraliterature so far,  but I've read, re-read,  studied and taught the original novels, Jane Austen's 6 . So I can say I am quite accustomed.  After reading The Intrigue at Highbury, I just want to discover more of this new world.
Now it's time to read  my review at MY JANE AUSTEN BOOK CLUB , my Everything Austen page online.
GIVEAWAY FOR  ITALIAN READERS 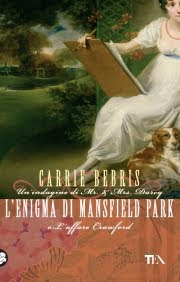 After reading my review of The Intrigue at Highbury,
and you will have a chance ( or two)  to win  a copy of Carrie Bebris's L'ENIGMA DI MANSFIELD, the Italian translation of  The Matters at Mansfield. Winner will be announced on  10th March .

I know there are several Italians among you, so let's see if you are interested in  these delightful mystery books based on Jane Austen's world. If you are Janeites, you'll love them.
Thanks to the Italian publisher TEA for granting me this copy of Carrie Bebris's latest Italian translation, released  in January 2010. Other books by Carrie Bebris published by TEA are ORGOGLIO E PREVEGGENZA , SOSPETTO E SENTIMENTO , LE OMBRE DI PEMBERLEY.
And , of course,  thanks to CARRIE BEBRIS for her kindness
and for the delight she gives us through her work!
Posted by Maria Grazia at Tuesday, March 02, 2010
Email ThisBlogThis!Share to TwitterShare to FacebookShare to Pinterest
Labels: Books, From my bookshelf, Jane Austen's World

Wow, MG, I didn't know this series! What a great introduction from the author herself. Do you know, instead of translating my usual law papers or technical manuals, I would have loved to translate this into Italian. Wouldn't have been lovely??? Please include me in the giveaway. Tks. A.

What a lovely guest post and giveaway!!! I just finished reading it last night and I simply LOVED it!!!!! Right down to the very last word. Very clever and intelligent writing and the mystery aspect was very captivating and suspenseful. I wasn't able to guess the outcome until close to the very end! Congrats Maria, on such a wonderful post.

What an interesting interview! I've never read any Austenesque mysteries- they sound like fun:) I do read Italian!

Maria Grazia, you have done such wonderful things with your blog! I just browsed through your section of Blogger Buddies..Interviews- I love it:) Going to read more..

Great interview. You have some interesting picks. Keep it up!

I'm still waiting for my copy of the book to arrive but as I've enjoyed the entire series (quite fun) I am certain it will not disappoint. I love the Italian cover for Matters at Mansfield - it's absolutely beautiful!