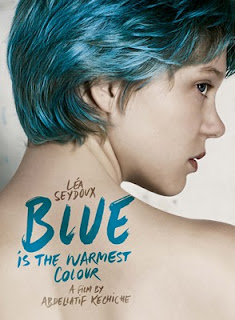 The 2013 Cannes Film Festival, officially opened by The Great Gatsby,  has just turned off its glamorous lights on this year's  red carpet.  I was thinking how curious it is that just on the day when thousands of French people protested,  marching along the streets    in Paris,  against gay marriages, the experts at the Festival have chosen as best movie the French film "La vie d'Adèle" (based on the French graphic novel Le Bleu est une couleur chaude (Blue is the Warmest Colour) . Directed by Abdellatif Kechiche, the film won the Palme d'Or  (see a clip here).
What are the true colours of France today?
Yes, because this film features "the most explosively graphic lesbian sex scenes in recent memory" according to Justin Chang writing for Variety and may require some editing (censorhip?) before it is screened in cinemas.
At the beginning of the story, 15-year-old Adèle (Adèle Exarchopoulos) has no doubt : a girl must date boys. Her life is turned upside down when she meets Emma (Léa Seydoux), a blue haired young woman, which allows her to discover desire and to assert herself as a woman and an adult. In the look of others, Adèle grows, looks for herself, loses herself and finds herself again.


I don't think a movie can change public opinion. But I'm glad and grateful for the signals coming from the worlds of art and culture. 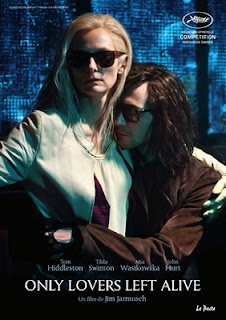 Following the news from the Festival I've read about Only Lovers Left Alive starring Tom Hiddleston,  Mia Wasikowska, Tilda Swinton and  John Hurt and directed by Jim Jarmusch. Quite curious about it! Why is our world so drawn to vampires? Are we more fascinated by their being forever young and strong, by their being creepy bloodsucking non-living  beings, by their being sophisticated, well-read,  wise and experienced in most cases? Maybe we are fascinated by all of these features: their wild, supernatural side as well as their being extraordinarily human.
A story centered on two vampires who have been in love for centuries, Only Lovers Left Alive has been presented at Cannes to compete for the Palm D'Or but hasn't won.
Anyhow, are you longing for a new vampire love? The he in the vampire couple is played by Tom Hiddleston, who is going to be back soon as wicked Loki  in Thor 2 wearing even longer black hair,  but offers an anticipation of that look since he has a rocker's  long black hair to play Jarmush's Hamletic vampire in love, Adam.
(have a look at these clips from the movie here and here). Nocturnal and cerebral, Jim Jarmush's new film features a great love story more than a vampire tale. The  love between the two protagonists is  eternal but terribly human at the same time. And eternity can  make things extremely complicated for human love.
For more about this year's winners read: