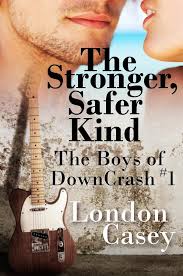 Writing a series isn’t quite like writing just a book.  And when you throw in connecting characters, story lines, and a band… it’s like creating everything.  At the end of it though, it’s quite amazing to see what’s been created.
When I first started writing The Boys of DownCrash, I envisioned the series as something fast, even novella-like.  But the second I finished the first couple chapters and really got to meet the guys in the band (Tripp, Tatum, and Logan), I knew this wasn’t going to be short.  Or fast.  Or even easy to write.
These guys were cute, sexy, hot, and complicated.  They were together as one of the most popular bands going but individually they were so very different.  And maybe that’s what makes the series so fun… to write and read.  I didn’t want to have the same stories appearing in each book and I didn’t want the guys in the band to be the same either.

In the first book of the series (now available:  The Stronger, Safer Kind), Tripp meets and falls hard for Scarlett.  But Tripp has his own demons lurking.  Scarlett notices the way Tripp drinks and when she turns to the band, they reveal two things… good news, Tripp doesn’t drink like that all the time… bad news, it’s going to worse before it gets better and they won’t tell her why.
Scarlett is also given the chance to have an easy life when her best friend, Andy, confesses his love for her.  He has money, he’s going to law school, and a life with him would be easy.
But Scarlett can’t keep away from Tripp and his dark secret. 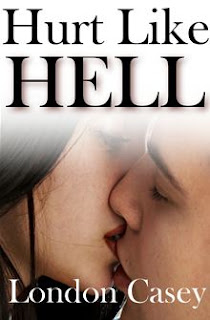 Their romance collides in ways neither one thought possible because Tripp isn’t the only one with a secret.

Now, the second book in the series (Torn to Pieces due June 2013) follows the drummer of DownCrash, Tatum.  He appears in the first book, along with Maggie, who is Scarlett’s roommate.  It’s their turn to discover romance (and lust!), but it doesn’t come without drama… Maggie has a past that nobody knows about.  A past she thought was long gone.  And a past that comes crashing back with enough violence that someone may not make it out alive.

The Boys of DownCrash is a trilogy with the final book set to be released in July 2013.  It’s been amazing to write these stories and I can’t wait for everyone to read all three.  Each one is a stand alone book but it’s best to enjoy the series in order.

The Stronger, Safer Kind  (The Boys of DownCrash #1)


All Scarlett wanted to do was thank the sexy stranger who helped her push away a drunk, grabby college boy at a bar. When that stranger identifies himself as Tripp and then takes the stage as the lead singer and guitarist for rock band, DownCrash, everything in Scarlett's life begins to change.

Her best friend, Andy, confesses his love for her and leaves her with what should be an easy decision to make... yet each time she looks in Andy's eyes, she can't help but face her secret, nightmarish past.

The only thing that makes Scarlett feel better is Tripp... but Tripp isn't just a bad boy rockstar, he's hurt. He's in pain. He tries to hide his pain in a bottle, but Scarlett believes that, perhaps, their secrets can help each other.

Friendship and love is suddenly put to the test, and Scarlett is torn... Will she choose an easy, comfortable, happy life or a life clouded with mixed signals, raw emotion, and intense romance?