JOURNEY OF PROMISE BY VICKIE HALL - BLOG TOUR AND GIVEAWAY 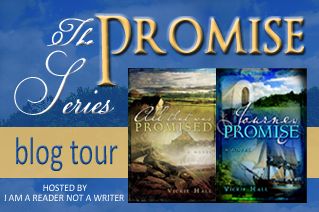 
Journey of Promise When converts Richard and Leah Kenyon leave Wales and heed the call to Zion, they are unprepared for the toll exacted by the journey. To face the incredible odds mounted against them they call upon the Lord's tender mercies to see them through and strengthen their love for one another. Their story will remind you where to turn during your trials. 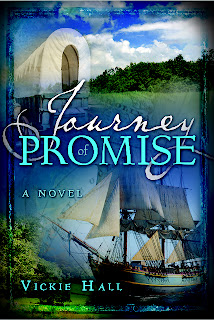 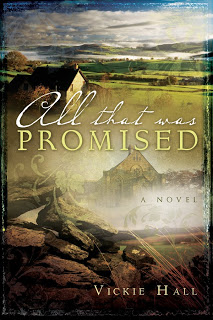 All That Was Promised In 1847 Wales Methodist Minister Richard Kenyon converts to Mormonism. Richard’s newfound faith is put to the test when he faces the anger of his former congregation, his wife’s indecisiveness, his brother’s betrayal, and the murderous intentions of misinformed villagers.

Excerpt  from Journey of Promise

The boat’s six boilers churned with monstrous pent-up energy, waiting to drive the steam power forward and commanding the craft up river. The strikers, men in charge of the engines, monitored their pressure gauges and all appeared within range as the firemen fed the hungry furnaces.

As the passengers neared the waiting gangplank, a deafening blast assaulted their senses. A tremendous and unexpected boiler explosion sent a third of the vessel sailing into the air. Bodies from the ship went flying in all directions, some into the river, some raining on land along with splintered shards of jagged wood and twisted bits of metal.

Great plumes of hissing steam stretched into the sky, spraying all in its path for a considerable radius. Anyone who inhaled the steam died instantly, while others succumbed to excruciating burns caused by the heated water and sprays of steam. Screams of pain and shouts for help erupted in the aftermath as the debris from the explosion settled all around.

Those on the bank were shocked and stunned, momentarily frozen in time as the catastrophic event unfolded before them. Gradually their senses were drawn from the shock, and they raced toward the carnage, screaming and praying.
The furnaces of hot coals were exposed and splayed throughout the deck, making the possibility of fire a serious threat. Hissing vents of scalding steam continued to spew from the exposed boilers. The trapped crewmen screamed for help but their fates were sealed and their cooked flesh peeled from their bones without effort.

Within minutes, chains of people were assisting the wounded from the boat. A fire erupted near the engine house, small at first, but it rapidly accelerated. The enormity of the wreckage was astounding, made even more surreal by the encroaching fire.Piteous cries could be heard from beneath the ruins. Many of the crew tried to douse the fire with buckets of water, but it soon became pointless and futile, and they abandoned the attempt. They took up axes and started to chop through the wreckage trying to free those they could. Within a few more minutes, the fire drove the men back and they were forced to desert further pains to save anyone left alive. The horrifying screams of those trapped without rescue grew to a sickening crescendo as the fire neared. They begged for mercy as the flames began to lap at their extremities and then their voices fell silent, their torturous end completed. 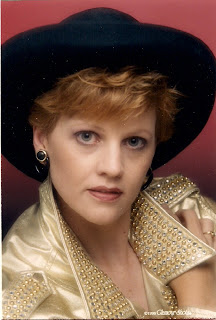 Author Vickie Hall Vickie is a native of Utah, but growing up, lived in the states of Colorado, Idaho, Montana, and Nebraska. When she's not writing, she's composing music, or shopping with her sister. She loves animals of all kinds and camping with her family. Her favorite pastime is watching old movies on TCM, and unashamedly has a crush on Cary Grant.
Links:
Blog * Website Facebook * Goodreads