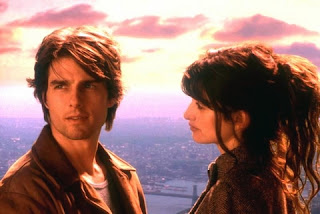 Vanilla Sky is a 2001 remake of the great 1997 movie, Abre Los Ojos (Open Your Eyes).  Tom Cruise plays David Aames, a selfish,  spoilt, rich  young man who takes other people's emotions for granted, and thinks only of himself. He is the one who will have to open his eyes on what really counts in   a  man's life, he will have to rediscover what to live means and make a final essential choice.  Jason Lee plays Brian Shelby, David's best friend , and in many ways, his only one, which underlines the extreme solitude and shallowness David leads his life in. Penelope Cruz plays Sofia Serrano, Brian's girlfriend whom accompanies him to David's birthday party. Cameron Diaz plays transgressive, volcanic Julie Gianni, David's occasional bed buddy.

Kurt Russell plays Dr. Curtis McCabe, a psychologist supporting David after his terrible accident, the accident in which he will be left awfully disfigured in his body and deeply wounded in his mind. All the interactions between the mentioned characters , and the consequences of them, make Vanilla Sky one of the most emotional, and complex thrillers ever made. I won't explain anymore of the plot, because it's far more compelling, the less you know. Ignore all people that call this film too confusing to follow. If you pay attention, you won't be confused. The film is very complex, but not as confusing as I had heard from other commenters. And in my opinion, it is a good one. Maybe the secret is to re-play the DVD from the beginning, once you get to the end and are completely puzzled by the final revelations.
2. Truly, Madly, Deeply (1990)

Well, these are not lines from the script but the opening  lines of a nice pop song by The Savage Garden of the same title, Truly Madly Deeply (1997) . They can give the gist of the deep, incredible love that unites the two protagonists beyond the boundaries of the possible. 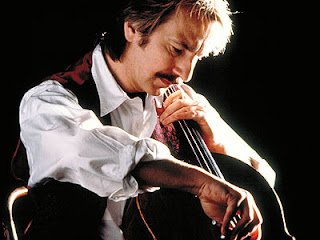 In Italian it's loses its poetic touch becoming a rather funny Il fantasma innamorato"  (The ghost in love). Comparison with ghost are inevitable, but I can assure you this one is totally different. It's a bizarre representation of a life after losing a loved one. One the protagonist, Nina,  truly, deeply, madly loved . It's a light, amusing and at the same time touching representation of the hereafter and the bond between the dead and the alive. It's a lyrical, romantic story, full of sentiment but not sentimental. Nina (Juliet Stevenson) is desperately heartbroken at losing her boyfriend, dashing cello player Jamie ( Alan Rickman). Since Jamie's  recent death, Nina has been living alone. But, as she tells her psychiatrist, Jamie has never left her side. She feels his protective presence constantly. He sings; he tells her to walk in the middle of the street at night. For some reason, he seems to have picked up a little Spanish. His accent, she says, is terrible!
It's an interesting little film. The moments of grief are honest and messy. And it could have been a cheesy sad story but script, director and cast all do so  well to avoid that. If you haven't yet, you should see it. For two main reasons, at least: Juliet Stevenson's awesome performance, and Colonel Brandon playing beautiful melancholic tunes at the cello! Only one reason not to watch: it's full of rats, so if you've got problems with them... Not joking. (Watch a trailer)
3. The Lord of the Rings Trilogy : The Two Towers and The Return the King


Warning: The fans of Peter Jackson's Trilogy are warmly invited NOT to read this!

I know, I know. It must sound incredibly unbelievable but...I had only seen The Fellowship of the Ring long ago with my students at school and never the other two ones. These films are so not my cup of tea! However, my son was watching the second film, The Two Towers,  in HD on the big TV set in the lounge while I was correcting tests, I had a look at the screen, then another one and ... found myself forgetting my work and following the story. Well, the beautiful photography is rather catchy. So I stopped working and watched it. It was endless! Or that was the impression I got. Slow and often quite boring. My favourite character? Smeagle / Gollum! It's an incredible creation and such fun.

The next day, we decided to see the third movie together and , fortunately, I liked The Return of the King much more. In it Gondor is overrun by the orcs of Mordor, and Gandalf rides to Minas Tirith to aid the humans in the war that is ahead. Aragorn must realize his true identity and purpose as the King of Men, and journey with Gimli and Legolas to summon the Army of the Dead so that the battle against evil can be won. Meanwhile, paranoia and suspicion rises between Frodo, Sam and Gollum as they continue their increasingly dark and dangerous travel to Mount Doom, the one place where The Ring can be destroyed once and for all. At the end of this third movie, old Bilbo makes his entrance in the story. He leaves with Frodo and Gandalf.

Will  The Hobbit start just from there? Because, you know, this has just been the beginning  of  my hard training to be a better informed and competent watcher of the two Hobbit movies coming out respectively in December 2012 (An Unexpected Journey) and December 2013 (There and Back Again). I'm eagerly waiting to see Richard Armitage in action as Thorin Oakenshield, the leader of the dwarves accompanying Bilbo Baggins (Martin Freeman) in his journey to the Lonely Mountain to reclaim taken from them by the dragon Smaug.

I had to laugh at your statement that you had been watching OLD movies, MG! I thought you were talking about 1940s, oer even 1930s... to me, movies dating from the 1990s on are quite recent ;-)
I'm glad you've appreciated the little gem that TMD is, precisely for the same reasons all its fans love it. i just can't watch it too often because every time I end up crying buckets :-/
I'm not a LOTR fan, either: just watched 1,5 movies - fell asleep while watching The 2 towers *blushes*. But for some reason I cannot fathom, I'm eagerly waiting for the next two TH movies, too ;-)
Happy Republic Day,
xx K/V