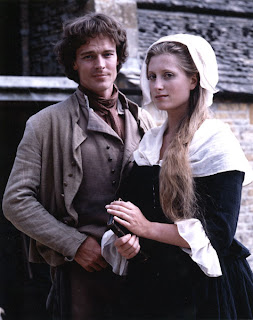 I've recently watched this 1992 TV movie based on a classic novel by George Eliot, Adam Bede, her first published work, actually.  It was not as good as other adaptation of Eliot's works I've seen (Daniel Deronda, Middlemarch or The Mill on the Floss) . However, it was at least rather  loyal to the book. The strangest thing was ...my feelings for the protagonist. One is supposed to sympathize with him, while I felt so ... awkward and uneasy since the supposed flawed but  naive, good-hearted, romantic lead character,  Adam Bede, had the familiar face (twenty years younger) of Iain Glen. What's wrong with him? In my mind he bears the guilt of being the trechearous and wicked Vaughn Edwards in Spooks 9, the one who started the downfall of Lucas North. I had a hard time to move from hate to love, poor Adam Bede. Think that I rather preferred the meant-to-be the villain in this story, the charming seducer Captain Donnithorne, played by James Wilby. . 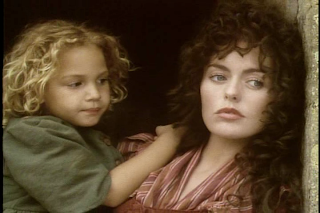 Set in the rural community of Hayslope at the very beginning of the 19th century, Adam Bede tells the story of Hetty Sorrel (Patsy Kensit), a beautiful dairymaid who finds admirers throughout the county. Chief among them is Adam Bede (Iain Glen), a kindly carpenter who loves Hetty. But Hetty doesn't love him; instead, she finds love and sex with Captain Arthur Donnithorne (James Wilby), the heir to the county's big estate who's convalescing from an injury. Adam is attracted to Dinah Morris (Susannah Harker   aka Jane Bennet 1995) as well, a cousin to Hetty and a fervent Methodist preacher. 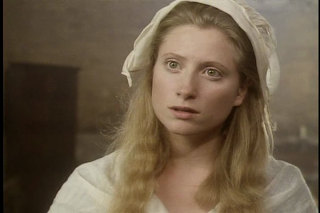 When Adam finds out that Captain Donnithorne has been seeing Hetty, he fights with him, and convinces Arthur to break it off with Hetty. Arthur does, and leaves for his regiment. Adam convinces himself that he will marry Hetty, but before the wedding, she leaves town - carrying Arthur's child inside her. Chasing after Arthur, she misses him and gives birth to her baby. But, in her "confusion," she buries the living child in a field, killing it, and stands trial for murder. Will Adam Bede or Captain Donnithorne succeed in saving her from hanging?
From the book to the movie
The movie is quite short and totally lacks the in-depth psychological analysis typical of George Eliot . In the book we know much about Adam Bede and his inner struggle and sorrow, which will make him a better man in the end of the story,  largely humbled and less judgmental of others. Also the heroines aren't so neatly portrayed in the TV movie, both Hetty's and Dinah's personalities have many nuances in the book which we can't even have a glimpse of on screen. But you can't expect too much from a less than 2 hours' long movie, can you?

I must admit, though, that the gist of Eliot's themes and motifs can be recognized in the TV movie too:


Eliot drew the plot of Adam Bede from the death of Mary Voce, who was executed in 1802 for killing her child. Eliot’s Methodist aunt told her about Voce, whom her aunt visited and converted in jail. According to Eliot’s account of the writing of the novel, the character of Dinah Morris is based very loosely on Eliot’s aunt, and Adam Bede himself is based very loosely on Eliot’s father as a young man.

On the whole, I'm glad I could add this piece to my DVD collection and to my list of period movies watched and reviewed.
Posted by Maria Grazia at Sunday, June 19, 2011
Email ThisBlogThis!Share to TwitterShare to FacebookShare to Pinterest
Labels: BBC Drama, Costume movies, From Books to Movies, My DVD collection

Haven't seen the TV movie yet, but as for Iain Glen, I'm afraid I can't trust him either: his face has a certain je-ne-sais-quoi, it gives me a disturbing feeling. Maybe that's why he often plays the vilain, or, better, someone you can't trust completely (see GOT, Spooks 9, even the Last legion). I wonder which kind of role has he got in Downton Abbey 2...
K/V

I've not seen this drama. Thanks for your review! Sorry that Iain Glen was stuck in your mind as the baddie from Spooks!

@K/V and Charleybrown
I don't want to be too harsh on Iain Glen. He was maybe miscast in Adam Bede, not completely his fault though. If he is still stuck in my mind as Vaughn, he must have been very good at playing that baddie, don't you agree?
Thanks for your comments. MG

I'm afraif it's the same for me as well - can't trust a character played by Iain Glen! Watched four episodes of Game of Thrones yesterday, and during one of the episodes, I even said to the hubby "I don't trust him!" and when asked why, mentioned how untrustworthy he was in Spooks! Silly, really. After all, he's just an actor playing a part!

I don't think Iain Glen was miscast as Adam Bede. Many of you seemed to have it in your heads that Glen was only capable of portraying villains. He wasn't the problem. You were.