WELCOME TO ITALY, NORTH AND SOUTH! 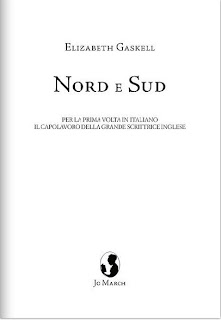 You know I particularly love Elizabeth Gaskell and I've often written about her works and their adaptations. Just click on the tag Mrs Gaskell or North and South at the bottom of this post, to get an idea.  I always teach about her to my last year students, reading Mary Barton or North and South with them. Why am I mentioning her again? Because I've just finished reading an excerpt of the first  unabridged Italian translation of her North and South  that  will be soon published by Jo March Edizioni.  (HERE)

North and South appeared as a twenty-two-part weekly serial from September 1854 through January 1855 in the magazine Household Words, edited by Charles Dickens. So it was rather time: 1855 -2011.
The majority of Italian readers still have to discover Elizabeth Gaskell and, especially, her Margaret and Thornton. So I'm so incredibly happy for this next publication, that I wanted to share with you, whatever language you speak.

We can read Cranford or Mary Barton in Italian, and only recently even Ruth, by Mrs Gaskell. But not yet North and South,  or Wives and Daughters. I'm rather stunned at this incredible, unforgivable, omission of our academic world. What have all the professors, researchers, assistants in the English Departments of the many universities in Italy been doing? 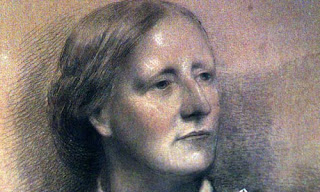 Many university students in the Departments of Foreign Languages study Gaskell's novels and for their final projects (to get their degrees) they are asked to translate unknown contemporary African, New Zealander, Canadian, Australian writers. Nothing, I really mean NO-THING, against writers of any nationality but ... what about poor forgotten Mrs Gaskell?
North and South is definitely a classic novel which can be read and liked for many reasons by Italian readers, one of them being the fact that we have a long rooted cultural clash between the traditionally industrialised North and the more agricultural (especially in the past) South. 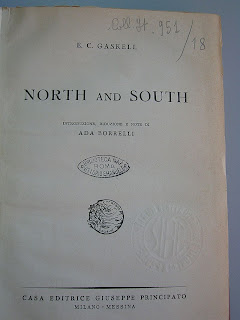 To be honest, we had a translation of North and South. One, abridged and dating back to the 1960s, by Ada Borrelli , published by Casa Editrice Giuseppe Principato. If I were a good translator, I'd like to translate all of Gaskell's novels and I'd propose them to a great Italian publisher. But I'm not that good and I'm too busy doing so many other activities. Now, this is why I'm very happy and grateful to Jo March Edizioni.
Have a look at the excerpt they have on their site, leaf through the few pages from chapter VII narrating Margaret and Thornton's first encounter: New scenes and faces,"Scenari e volti nuovi" . Even though you can't read Italian, do it, as it  is part of a very special, longed for project!
Then, I do hope, sooner or later, Italian TV will discover BBC North and South, the  televised version of Gaskell's novel ( 2004 ). I hope this is going to happen before it becomes a museum piece!
Leaf through the pages of the excerpt in Italian
Compare the translation with the original HERE
Jo March EU online
Jo March Agenzia Letterearia Facebook Page
Posted by Maria Grazia at Saturday, June 11, 2011
Email ThisBlogThis!Share to TwitterShare to FacebookShare to Pinterest
Labels: Books, Mrs Gaskell, North and South, Welcome to Italy

Amazing!!! I'm so excited, I really can't believe it! That's a very good news on Saturday morning :) Incidentally, have anybody noticed that "Ruth" had been published in Italian a couple weeks ago?

@Claudia
I hadn't! I have to correct my post then because I wrote Ruth had still to be translated! Thanks, Claudia.

hi Maria Grazia I knew North and South was coming. I started translating Wives and daughters into Italian, after falling in love with the book. But I don't have much time at the moment and I'm only at the first chapters. I'm thinking about putting them on the internet for Italian readers to enjoy it.
I do love Gaskell, you know.
maribea

@maribea
To translate W&D will be a monumental work of translation. Meanwhile, you should share the chapters you translated, many Italian readers would be grateful!
Thanks for commenting, MB.

Doesn't appear to be a Swedish translation out there either - shocking!

@Traxy
So, you see? You should start campaigning, Traxy! Did they translate other works by Gaskell into Swedish?

This is a praiseworthy initiative, MG, but I ardently hope the sample they gave us is only a draft, because the results so far are really dull and flat, and the language doesn't do justice to Gaskell's prose.
K/V

@K/V.
Do you think so? Let's wait and hope. The final version is not ready yet.

Here in Brazil we have the same problem. First translation of N&S was released a few months ago.
I had never heard of Elizabeth Gaskell before discovering N&S series on the Internet (nor Mr.A).
I wonder how much more good books and films we are losing by not knowing...and this is a great reason to learn English, lol!
Aldebaran

@Aldebaran
Something I'm sure of is that to read/watch books/movies in their original language is much better. However, we can't all be multilingual, can't we?

I want to start translating again and if you want, I can give you a sample and you can post it there. Just to let people read it and enjoy such a marvellous book as Wives and daughters.

@maribea
We can arrange something to share your translation, MB. Keep up with the good job, then!

Nice post.This novel is amazing.It should have been in a big screen.It should have been translated in different languages.Italian translation or in any translation it would be a blast.Translating a novel to different language shows the rich blend of knowledge and culture in a society.It is important that novels be translated in a foreign language since it helps one to get acquainted with the thoughts, traditions, principles and actions of the people from the region.