AT HOME WITH THE GEORGIANS - DISCOVERING LIFE BEYOND LITERATURE AND ARCHITECTURE 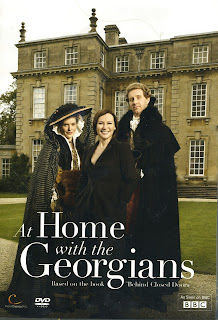 It 's been as gripping as a good period drama, as intriguing as a mystery story, as delightful as an Austen adaptation. A pleasant surprise. Living history, actually.
Watching this three-part series presented by Professor Amanda Vickery, based on her Behind Close Doors and fortunately available as a DVD, has been incredibly interesting.
As a fond reader of historical fiction, as a student (I feel I still have so much to learn!)  and teacher of English literature, I watched it with extreme pleasure and curiosity. Professor Vickery's  descriptions of homes were mingled to the narration of real lives, through the reading of diaries and letters,  and that made everything  realistic and really involving. Professor Vickery is an entertaining, smart story - teller.
Furthermore, in my mind, the lives and experiences of real individuals found parallels in many fictional characters' lives. I  went on thinking of Jane Austen,  of course. Impossible not to think about her own real life or about the world she created in her work while watching.

In fact, in the first episode, A Man's Place, Jane Austen as well as her novels and her heroines were abundantly referenced. There was even a touching, moving moment, when Professor Vickery gave a  heartfelt hug to Jane Austen writing-table at Chawton. Well, I was moved as if she were hugging Jane's herself and expressing her all our sympathy.


The Three Episodes (from the BBC site) 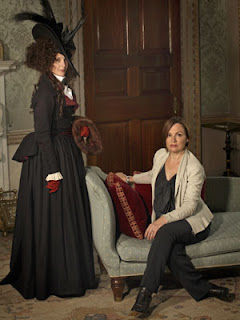 In the first part (my best favourite) , A Man's Place, Amanda Vickery  uncovered some surprising truths: about the lives of spinsters and bachelors; about how the home became crucial to the success or otherwise of a marriage; and, perhaps the biggest surprise of all, that setting up home in the 18th century was not driven by women (as you might expect) but by men.
The second issue, A Woman's Touch,  highlights how the British obsession with beautifying  homes is not a new phenomenon - it began with a vengeance in the Georgian era. Amanda Vickery, on a journey from stately home to pauper's attic, reveals how 'taste' became the buzzword of the age 300 years ago and gave women a new outlet for their creativity, raising their status in the home as a consequence. But with it came new anxieties about getting it right.
In the third part,  Safe as Houses, professor Amanda Vickery uses sources, from intimate diaries to Old Bailey records, to reveal how the 18th century home was constantly under threat from theft, fire, divorce, poverty, illness, old age and death. Georgian houses may seem like sanctuaries of calm elegance to us today, but at the time they were noisy chaotic places bursting with extended families, servants and lodgers and threatened by the lawlessness of Georgian streets.
Read Amanda Vickery's post
Amanda Vickery interviewed at Austenonly
Buy the DVD at Amazon
Useful bibliography
Posted by Maria Grazia at Monday, June 27, 2011
Email ThisBlogThis!Share to TwitterShare to FacebookShare to Pinterest
Labels: BBC programmes, My DVD collection, The 18th century

@Jenny@Kerrfect!
It's just perfect compendium for someone who loves period drama and historical fiction. I'm sure you'll enjoy it, Jenny.

At Home with the Georgians is a fabulous addition to my Georgian library! Amanda Vickery makes Georgian England accessible to all.
@Maria you are so on the money when you say "It's a perfect compendium for someone who loves period drama and historical fiction"!
Thanks for sharing another wonderful post.

@Lucinda Brant
And I thought of you while watching, of course! I imagined your elegant heroes and heroines walk around those beautiful homes. Glad you liked the post and thanks for commenting.

Maria Grazia, you know we have lots in common and I'm surely watching this DVD as soon as possible. I need to be in the 19th century as much as possible seeing that I'm comfortably living in the 21th century ah ah!!! On Sunday I will be dressed in my 19th century costume for the last ball of the season. I will think about you all who love historical drama and fiction and literature. It is such a world of grace and gaiety.

Nice effort, very informative, this will help me to complete my task. Thanks for share it keep it up.