I went to the woods because I wished to live deliberately, to front only the essential facts of life, and see if I could not learn what it had to teach, and not, when I came to die, discover that I had not lived. Henry David Thoreau, Walden (1854) 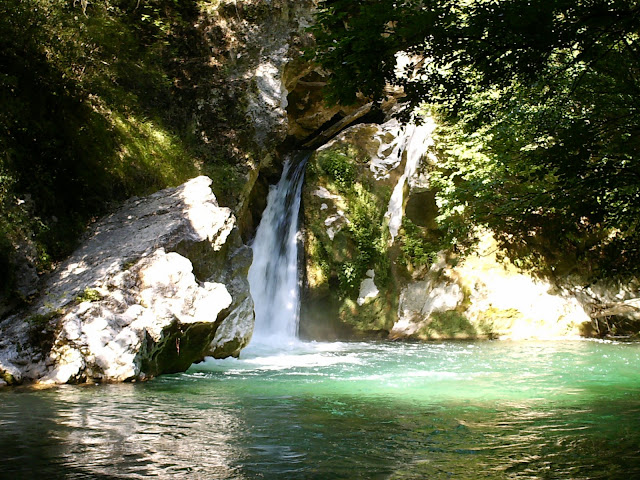 As I told you before, after a sitting marathon what I longed most was going for long walks. It has been terribly hot, unfortunately, in the last days so long walks were not recommended. Anyhow, yesterday I couldn't resist my sister's invitation to join her to a wanderful cool (in every sense) place she had gone to with her husband last Sunday. I had always heard about this splendid pond near my house but never went. I thought it was too dangerous to get there but I've just discovered it isn't . I have already shown and described my favourite walk some posts ago (HERE) and this spot is on the same route, near the monasteries, only you don't follow the main road at a certain crossroads ... Now, I absolutely want to share with you the incredible excursion my sister and I went for. It is just 3 minutes by car from my house, then ... into the wild. My eyes are still full of the green and the blue we were astonished by yesterday afternoon.

The amazing pond - St Benedict's pond it is called - we finally got to walking about half an hour after leaving the car, is formed by the river Aniene which comes out in a sudden sprinkling fall from a crevice in the mountain. Impressive. We sat there silent, watching and listening to the roaring of the water ... the voice of Nature, the sound of life. It was not hot at all, we needed a jumper and ... we were glad to be there. Glad to be alive.
Posted by Maria Grazia at Tuesday, July 21, 2009
Email ThisBlogThis!Share to TwitterShare to FacebookShare to Pinterest
Labels: About me, My town, Welcome to Italy

Nature gives us so much! It has to be one of our first duties to protect and preserve it for the future generations.
Your post made me think of a passage read on Jane Austen's novel "Emma":-"It was a sweet view — sweet to the eye and the mind. English verdure, English culture, English comfort, seen under a sun bright, without being oppressive."-(the Narrator on Abbey-Mill Farm, Emma, Chapter 42).
Ciao
Loredana

@Loredana
Thanks for your contribution. Perfect quotation from our beloved Jane! Buona giornata.

Wow! What a beautiful setting for a great day-out especially when it's so hot all around! We don't have the "heat" problem here in the Uk but we also need to get out into the nature every now and then! Have a nice rest from school. Ciao. A.

@lunarossa
Thanks, A. You're always so kind! Hugs.

OOh this is a lovely post. Have you watched the movie "Into the Wild"? For a moment I thought your post was a review of it. Awsome movie it was!

I've also been following your other posts, but for some odd reason, it wouldn't allow me to review. But I'm hoping it'll work this time

@June
It seems it has worked this time and I'm happy to read your comment. I saw the movie too, very sad story. But my walk through the woods was not that tragic...rather the opposite... Which is the opposite of tragic? Well, full of joy and beauty!
Thanks for dropping by. Cheers!

It looks so beautiful! Make the most of it!

I want to jump right into the photo!

@Kathryn & Fiona
Thanks for appreciating and commenting. Have a great summer time!