Not my case, though! Examination work at this time of the year and with this hot weather can be rather exhausting. It seems I’m always sitting there, uninterruptedly, and doing the same boring stuff , day after day, while the others are enjoying their summer holidays. I know it is not correct and I try to do my best for my students’ sake. They’re there trembling nervously in front of all of us – and I’m there feeeling imprisoned and dreaming to be on a sunny beach… It happens also that, once I am at home, I don’t feel like doing anything: housework, reading or simply concentrating on very easy tasks (just like my teenage students all the year round!). So , for example, I’m reading a very good book but it is going on so slowly and I need to hold on tightly to my desire to know … but … pointlessly, I often have to close it ‘cause my mind refuses to go on working… I NEED SOME PROPER REST. 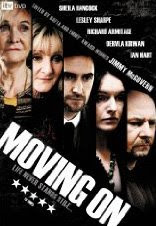 Now, after the “lamentation premise,” – I know it was a bit boring but ,please, let me do it , my friends –let’s get to the real pointof my writing .
I’ve recently got (last Friday, 26th June and had been released only on the 22nd – Amazon can be amazingly rapid) a new acquisition for my DVD collection: BBC MOVING ON series. I was so glad, I really needed something new to watch. It took me an entire week to watch the whole series and , here I am, ready to write about it .The five 45 minute dramas were commissioned by the BBC for its daytime schedule, and were shown each day over the course of one week in May. Each drama stands alone, but they all concern characters moving on in their lives. They deal with contemporary issues that range from the property slump to transvestism. I had read very positive reviews on line and …ehm… of course … I’ve already told you … I’ll risk to be repetitive … but I can’t avoid it … I really appreciate Richard Armitage’s … acting skills and, yes, he is in one of the episodes (the third, Drowning not Waving) . Of course that was the first episode I watched (not only once) but it is not the one I’m writing about today. I’ll start from “The rain has stopped” , which I also greatly enjoyed .
First some reflections:

These ideas are at the basis of the plot of the first TV drama of the series: “THE RAIN HAS STOPPED” . 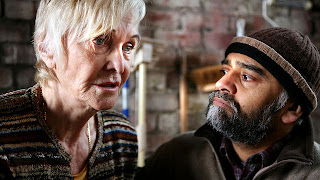 Liz is used to being at the beck and call of her family; she regularly babysits for her daughter, and her son seems to think she is his personal cash machine. She doesn't realise how unhappy she is until she meets Damar on holiday and falls in love. When he proposes she says yes, but isn't prepared for the reaction from her family when she returns with her new love: Damar, a retired Nepalese soldier. All they want is to hold on to the bit of sunshine that they've found . Unacceptable to her grown-up children : they do not accept the fact that another man, that other man, could live in their dead father’s house. They are not at all interested in their mother’s happiness, they suppose her duty is to die alone and live the rest of her days mourning their father. 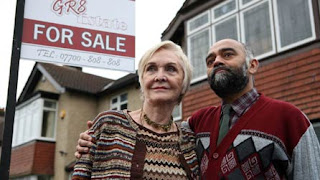 Parallel to Liz’s tragic dilemma, Damar’s terrible disillusionment takes place: he was a soldier in Nepal, one of the British ex-colonies, and his father, too, had fought, being a soldier in the Imperial police. And now how does the great country he expected to be grateful to him and his father thank him? There’s no place, no job, no respect for the poor man.
I do not want to tell you too much because “The Rain Has Stopped” is actually worth watching . I hope you have the chance to do it. I think BBC was really brave to offer their audience such good, well written , contemporary drama. That’s usually soap time and you don’t certainly expect you have to think or reflect on anything.

At the end of this moving story, I needed to re-read one of my best-loved poems and now I’d like you to read it, too . It can be linked to Liz and Damar’s love story, but it can be also interpreted in many other ways (like any poem or literary text).
Its title is LOVE AFTER LOVE by DEREK WALCOTT : 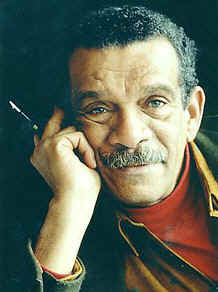 The time will come when,

with elation you will greet yourself arriving

at your own door, in your own mirror

and each will smile at the other's welcome,
and say, sit here. Eat.

You will love again the stranger who was your self.

Give wine. Give bread. Give back your heart

to itself, to the stranger who has loved you

all your life, whom you ignored

for another, who knows you by heart.

Take down the love letters from the bookshelf,

the photographs, the desperate notes,

peel your own image from the mirror.

Sit. Feast on your life.

I couldn’t find any clip from this episode so, if you want, you can have a look at this beautiful trailer with the five stories. I know, I’ve already used it in another of my posts, but… it is really well made.
Shelia Hancock is incredibly touching in her playing Liz. She is one of Britain’s best known actresses. She has appeared in numerous roles in television, film and the theatre.
Television appearances include Bleak House. Her stage roles include The Cherry Orchard, The Duchess Of Malfi and The Critic, all at the National Theatre. She is also about to open in the new musical version of The Sister Act.
Till next episode then. Now I have to wish you a wonderful evening and go to bed. I have to be ready for a hard working examination Satur- day! Hugs. MG

I always think it seems unfair that teachers who teach the 5th year have to keep slogging away until mid July while the others (once consigli, scrutini and now corsi di recupero are over) can enjoy the summer - you come across as a really dedicated teacher and whatever you might think I am certain your students can see that too - buon lavoro!!

@Kathryn
Thanks for your sympathy, K.Just back from a long day of colloqui + scrutini. First class over. Two yet two be done.Fortunately, tomorrow's Sunday!

Hope you'll be able to get some rest this weekend!! :)

@Marianna
I'll do my best! Have a great weekend, Marianna.

I totally agree with Kathryn. And have a peaceful Sunday!

@Elvira
Hello, there! I know you can understand me. Thanks for dropping by, E. A relaxing Sunday to you, too!Besos.

Moving On sounds like a really good series; I'll have to try to find it - thanks for the tip!

Your timing with Derek Walcott is impeccable; I'd never heard of him before last January, when I took a semester-long course on one of his works (Omeros).

I completely emphathize with your needing a break; I'm avoiding revising my thesis because I'm so burned out after this school year. Think of all the wonderful rest and relaxtion you'll have soon!

@Michelle
Thanks for dropping by, M. Yes, Moving on is a very well-written modern TV series. I'm going to post my reviews about the other episodes soon and I want to use the second episode with my studentsas well. It's titled "Bully". I've found it extremely good to start a unit about bullism.
Cheers!