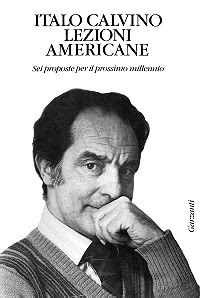 In these days I’ve read about - and I’m actually having - a different “perspective” on life. I’ve been reading Italo Calvino’s “Six Memos for the Next Millenium” . It is a book based on a series of lectures written by the Italian writer for the Charles Eliot Norton Lectures at Harvard, but never delivered as he died before leaving Italy. The lectures were originally written in Italian and translated by Patrick Creagh. The lectures were to be given in the fall of 1985, and Memos was published in 1988. The memos are lectures on the values of literature which Calvino felt were important for the coming millennium. At the time of his death Calvino had finished all but the last lecture:
· Lightness
· Quickness
· Exactitude
· Visibility
· Multiplicity
All that is known of the sixth lecture is that it was to be on consistency.
I particularly liked the first Memo, LIGHTNESS. It’s a wonderful lesson about literature and life. He suggests lightness as a new way to interpret life. Quoting , among many other poets and writers, Paul Valéry, ``One should be light like a bird, and not like a feather'' (p. 16), Calvino hopes to convey the right idea of lightness, which is something different from frivolity: “I hope to have shown that there is such a thing as a lightness of thoughtfulness, just as we all know that there is a lightness of frivolity. In fact, thoughtful lightness can make frivolity seem dull and heavy”. (p. 10)
According to Calvino, thanks to lightness we might be able to fly up and see things from a different perspective. Especially when life is hard, problematic, troubled. He proposes a quest for lightness as a reaction to a burdening life.
To make his bigger point , he resuscitates an obscure Kafka story about a magical bucket:
“the fuller [the bucket in Kafka's ``Der Kübelreiter''] is, the less it will be able to fly. Thus, astride our bucket, we shall face the new millennium, without hoping to find any more in it than what we ourselves are able to bring to it”.
This conception of lightness reminds me much of “my special philosophy”, again taken from one of Calvino’s complex stunning works, “The Invisible Cities”: “The inferno of the living is not something that will be; if there is one, it is what is already here, the inferno where we live every day, that we form by being together. There are two ways to escape suffering it. The first is easy for many: accept the inferno and become such a part of it that you can no longer see it. The second is risky and demands constant vigilance and apprehension: seek and learn to recognize who and what, in the midst of inferno,are not inferno, then make them endure,give them space”.

Now, as I said in my introduction, I actually have a different perspective on life these days, since if I look out of my window I can’t see THIS any longer 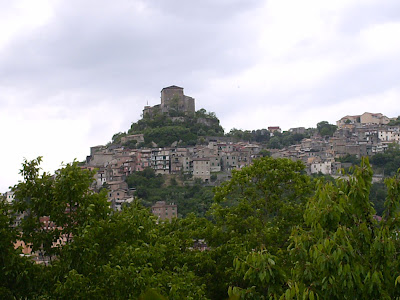 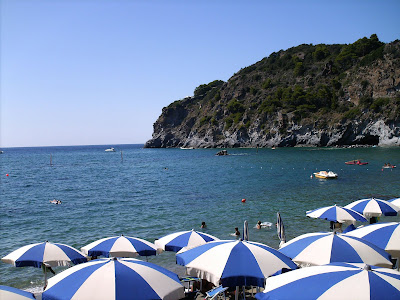 Got it! I’m at the seaside, in a beautiful island in the Tyrrhenian sea: Ischia. My sight is experiencing a feast of new light and colours , lots of blue and green nuances, bougainville everywhere. I’m reading a lot, relaxing alot and eating a lot! I have some problems with the Net, unfortunately, so I haven’t been able to and I won’t be blogging so much. I’ll try to do my best both at enjoying my holidays and at trying to get in touch with all of you.

Posted by Maria Grazia at Monday, July 27, 2009
Email ThisBlogThis!Share to TwitterShare to FacebookShare to Pinterest
Labels: About me, Books, Calvino

What an interesting post, Maria Grazia! I enjoyed it so much. I love these words by Calvino that you also quoted on the right:

"seek and learn to recognize who and what, in the midst of inferno,are not inferno, then make them endure, give them space" They're soooo true!

I wrote something once about lightness and depth some time ago: "Deep doesn´t mean heavy or overly serious; light doesn´t mean superficial or stupid. Wise people are deep and light at the same time." More or less the same idea, I think.

I like the difference between a bird and a feather, it's a good image.

And enjoy the seaside as much as you can, your well-deserved holidays!!! Baci

Like Calvino a lot and he seems to be quite popular in the English-speaking world as well. My husband had read most of his translated works even before he met me! T'invidio terribilmente, tu al sole della bellissima Ischia mentre io sono sotto la pioggia battente nella grigia Inghilterra. Sigh! Ciao. A.

I really like Italo Calvino and I have often thought of reading this book. I shall look for it!

@lunarossa
I didn't know Calvino was appreciated in the English -speaking world. But, please, don't envy me ... Enjoy your typically British weather thinking of how hot it is down here. Un abbraccio.
@Luciana
If you like literature, these lessons are great, indeed!Thanks for commenting.

Fun to discover your blog today and see all the movies, art, culture loaded in it! Bravo! Kind regards from EAGAN daily photo in Minnesota, USA