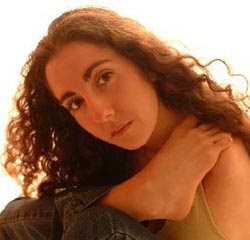 The most interesting oral exam I've listened to in these days was this morning. A girl, one of my students, talked about "OVERCOMING LIMITS". It was a very interesting and original work presented with beautiful power point slides. It had links with all the Literatures she studies as well as History, Philosophy and Art. It just lasted 10 minutes but ... it was so involving. Maybe it was also because the girl was so anxious and completely concerned in what she was talking about. When she came to Art, she didn't talk about the Impressionists, Van Gogh, Munch, Picasso or any other of the painters she had studied. She introduced us in the world of Simona Atzori, a painter and a dancer who has to cope with life without her arms. It was touching and the paintings she showed to us were so beautiful! Simona is an effective example of how a person has to fight but can finally succeeds in overcoming his/her own limits, how a human being can turn "borders to bridges", can take strength from his/her own weaknesses.

HERE IS A SHORT BIOGRAPHY OF SIMONA I'VE FOUND ON LINE

Simona Atzori is an Italian artist and dancer who was born in Milan. She was born without arms, and uses her feet to draw, write and perform all other daily activities.
Attempts were made to fit Simona with prosthetic arms at an early age, but she very quickly rejected them. She has said that she found the prosthetics extremely heavy and impractical, and it was much easier to use her own feet to perform tasks.
She started painting at the age of 4 and her talent was soon noticed by the artist, Mario Barzon, who encouraged and supported her. In 1983, she was awarded a scholarship from the Association of Mouth and Foot Painting Artists of the World. A defining moment in her early career was an audience with Pope John Paul II, at which she presented him with a portrait of the Holy Father.
Simona also started to dance at the age of 6. Despite some initial opposition from teachers who felt that it was not appropriate, her own determination and the strong support of her mother enabled her to succeed in a discipline normally associated with the fully able-bodied.
In 1996 she commenced her studies at the University of Western Ontario in Canada. Her course in Visual Arts enabled her to combine the two passions of her life, and she graduated with honors in 2001.
In recent years, Simona has been associated with the Pescara Dance Festival, and has endowed this event with the Atzori Award, given to dancers and choreographers. She continues to perform and exhibit her work all over the world.
On March 10, 2006, Simona performed a dance routine during the Opening Ceremony of the Paralympic Games in Turin.

NOW ... ARE YOU READY TO SEE HER ... FLY WITHOUT HER WINGS? Incredible but true!

Listening to this touching real story, 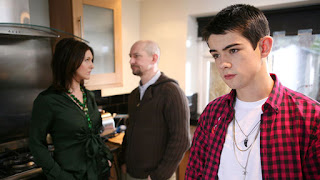 I remembered that I still have to complete posting my reviews of BBC Moving On episodes and that one of the two missing ones was DRESSED TO IMPRESS which deals just with a case of... diversity.
The touch paper is lit when a 17 year old boy's secret love of dressing in women's clothes is discovered and a turn of events ignites a ticking time bomb that threatens to destroy his parent's marriage and his family forever. He can't talk about his diversity to his parents, especially to his father. It is another very well written story, coping with a delicate serious problem but with a light comedy touch. HERE'S A CLIP WITH MY BEST WISHES FOR A VERY GOOD WEEKEND TO ALL OF YOU, MY FRIENDS!

P.S. THANKS TO ANASTASIA
Posted by Maria Grazia at Thursday, July 09, 2009
Email ThisBlogThis!Share to TwitterShare to FacebookShare to Pinterest
Labels: BBC Drama, Exams, Moving on

The first wow is for Simona Atzori. What an amazing and talented woman.

Second wow is for the clip from Moving On. As I haven't seen this show before, I thought the boy dressing up was a girl. I wonder what led him to divulge this secret pleasure of his? Maybe I should jsut go watch the episode and find out haha

What an example this dancer is for all of us! I worked in the organization of the Paralympic Games of Barcelona '92 for almost 2 years. It was a very interesting experience.

Hi MG, Your student must be really very clever to prepare such an interesting talk. Simona is a very corageous and fantastic lady and an amazing performer. When I see this kind of people I feel ashamed of my usual everyday winging...Have a nice weekend. Ciao. A.

Hello Maria - I discovered your blog this morning. This posting about Simona was very interesting! I try to educate my daughter to know how very fortunate they are. I'm a former foreign language teacher. I commend you for being a teacher! Grazie mille - Ciao! Kind regards from EAGAN daily photo in Minnesota, USA

Thanks for your kind comment Leif! I'll have a look at your blog.Ciao!