All the world's a stage,

And all the men and women merely players;

They have their exits and their entrances,

And one man in his time plays many parts,

His acts being seven ages.

Shakespeare thought that real life, the world we live in, is like a stage and all of us are actors playing one or more roles. If this were true, we all should feel at home in a theatre or feel like going there as often as we can. As for myself, I absolutely love going to the theatre, though it is not easy nor cheap. I live 72 km from Rome and the nearest theatres are just there.

Luckily, I've seen two plays this year, both -let's say - for professional reasons. I worked on two of Shakespeare's plays with my students and, after the class work, I took them to see OTHELLO and HAMLET staged in Rome (I posted something about the two experiences on LEARN ON LINE and on FLY HIGH). I love live performances greatly: when actors play there, in front of you, and you too are there sitting in silence and in the dark, it is as if magic happens... a story takes shape, emotions flows from the stage to the audience and vice versa , and you feel you are part of that whole. It is magic. 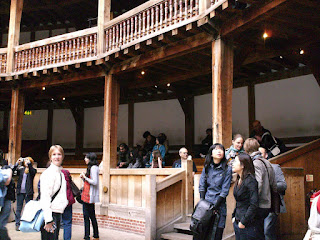 In my last trip to London, one of the most exciting sites I visited was Shakespeare's GLOBE THEATRE. I was there for the first time and I was so thrilled! (read about my visit HERE) . One of the things I'd like most is to see a show staged there next time I am in London. But, maybe, I'll have to be satisfied with a Shakespearean play at the Globe Theatre in Rome this summer. The 2009 Season proposes interesting plays for the next months. Let's see what I can do.

The fact with theatre is that it is quite expensive and, especially, young people are losing the opportunity of going and living the exciting

adventure of a live show. My students go ( well, come, with me) at least twice a year but bus plus theatre tickets (reduced for students) are 22/25 euros each time. In this period of crisis it is not so little money. Now, here we are at "A NIGHT LESS ORDINARY". What is it ? A bid to encourage young people to visit theatres. Half a million tickets were given by this Arts Council England's scheme to get more under 26-year-olds to watch live stage shows. Rupert Penry-Jones ( Spooks, Persuasion, White Chapel) was one of the actors involved in promoting the scheme. (WATCH THE VIDEO HERE). When will something like that happen in Italy too? I hope very soon. Now I have to leave you but ... I'll leave you in good company: the famous touching staging of ROMEO & JULIET ... from... SHAKESPEARE IN LOVE.

SHAKESPEARE - MUCH ADO ABOUT NOTHING

SHAKESPEARE - THE MERCHANT OF VENICE

Posted by Maria Grazia at Saturday, July 11, 2009
Email ThisBlogThis!Share to TwitterShare to FacebookShare to Pinterest
Labels: At the theatre, My DVD collection, Rupert Penry-Jones, Shakespeare