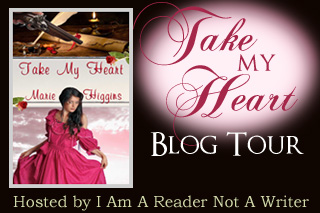 The question was brought up—how different was romance back in the Colonial times.  Answer…VERY different.
For those of you who don’t read a lot of historicals or watch historical movies, you’ll be surprised to learn that woman didn’t have a lot of options back then in regards to their life and marriage. In the late 1800’s and early 1900’s countries began giving women the right to vote…which is a whole other story which I won’t go into right now. Keep in mind that women had to be chaperoned until they were married. They couldn’t go out anywhere unless a sister, mother, or lady’s companion went with them.


When a woman became of age to court (dating), she could not be with the man alone—not even for five minutes, or her name would be ruined, and no man would want to marry her. The only exception to this rule was if the man who ruined her was responsible enough to marry her since he was the reason she was ruined. Can you imagine being the woman and trying to fall in love all the while someone (mother, sister, lady’s companion) was watching you? What if you wanted your beau to kiss you? Yeah, that would never happen! Some women never even kissed the man until their wedding day. And to think…this was normal!
It was expected that women marry and have children. Back then, there was no such thing as a career woman. Their so-called ‘career’ was to be a housewife and mother. In the olden days, there were a lot of arranged marriages, too, and the woman had no say in the matter. Her father signed a contract, and that was a done deal. She accepted her fate and married a stranger. Can you imagine doing this today in our way of life?
In my story, “Take My Heart”, the heroine’s twin sister, Katherine, had an arranged marriage. The man looking for a wife lived in Philadelphia, while Katherine, her sister Mercedes (heroine), and their father lived in England. When Kat married William Braxton and went with him to Philadelphia, she did not like her life, and made everyone in it—as well as herself—miserable. When she was put in an asylum (unbeknownst to her husband, William), and then dies, Mercedes decides to confront the brother-in-law she has never met and force him to pay for her sister’s medical bills. When Mercedes realizes William doesn’t know his wife has been in an asylum—and is now dead—Mercedes decides to play her twin sister’s role as his wife in order to collect the debt owed. What she finds along the way are little surprises she hasn’t counted on, especially when she begins to give her heart to a man who may be a spy against the crown.
Marie Higgins 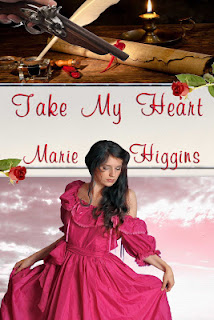 Mercedes Maxwell’s sister’s last wish was for Mercedes to find evidence against Kat’s husband, William Braxton, and have him hung as a traitor to the crown. Mercedes isn’t naïve when it comes to capturing traitors, because her own deceased husband had once been an agent for the King when they lived in England.

When she meets William Braxton for the first time, all is not as it seems. Portraying her twin, Mercedes knows this is the only way to get close enough to William to discover his secrets. What she finds along the way are little surprises she hadn’t counted on, especially when she begins to give her heart to a man who may be a spy against the crown.

”I enjoyed this book immensely. Each book of Marie's that I read is better than the last. I recommend this book to young adults and older who enjoy historical mystery, intrigue, fight for freedom, clean romance. This is the book for you.”
~~Mary Walling / Goodreads

“Few authors have mastered the art of storytelling like Marie Higgins. In this Colonial-era romance, Marie takes her reader on a wild ride. Every chapter, every scene, every line envelopes the reader's senses and imagination with passionate romance, deep emotional struggles, unexpected twists and turns, and neverending ups and downs. This was a hard book to put down and earns an unequivocal five stars from me. Thanks, Marie, for writing such great romances!”
~~Wanda Luce / Goodreads

“Marie Higgins's Take My Heart is a stunning colonial romance. With well developed characters and heartwarming scenes, this book will steal the hearts of romance lovers and historical fiction fans. There are numerous twists and Higgins keeps you guessing at every turn as to who the real villain is. This book is a "must-read" for anyone who loves romance, history, or just a good story. FIVE STARS ALL THE WAY!!” ~~L.D. Smith / Kindle

“Breathless! From start to finish you will keep wondering, questioning, and hoping. You will root for the underdog, and smile as love conquers all. Great read. You won't put it down until you're finished!”
~~M. Henning / Kindle 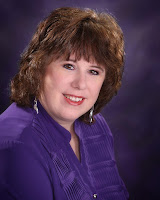 Since Marie Higgins was a little girl playing Barbies with her sister, Stacey, she has loved the adventure of making up romantic stories. Marie was only eighteen years old when she wrote her first skit, which won an award for Funniest Skit. A little later in life, after she’d married and had children, Marie wrote Church roadshows that were judged as Funniest and Best Written. From there, she branched out to write full-length novels based on her dreams. (Yes, she says, her dreams really are that silly)

Marie has been married for twenty-six years to a wonderful man. Together, they have three loving daughters and several beautiful grandchildren. Marie works full time for the state of Utah, where she has lived her entire life. Marie plans to keep writing, because the characters in her head won’t shut up. But her husband smiles and pretends this is normal.

Thanks for having me on your blog!!

Thanks to you, Marie, for visiting and contributing such a lovely post.
And to you @ellaquinnauthor for reading and spreading the word on twitter :-)

Maria, Ella is my little 'tweetie-bird'. Isn't she wonderful? :)

Hi, Marie. I believe I recognize you from Wattpad. :)
Not many authors are writing colonial romances. I think it's great you offer something from a different and fascinating era!