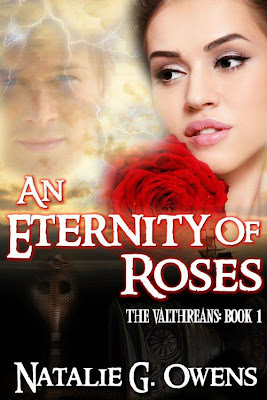 Natalie G. Owens got her first taste of serious writing by penning award-winning poetry, short stories, and articles for college and local publications. She sold her first book to a small publisher in 2007 and is currently indie published. Her favorite stories to write are romances with a dark edge featuring brooding heroes, strong heroines, and a good dash of fantasy. Today she's my guest to present her new release: An Eternity of Roses. Enjoy her blog post!

I happen to be a big fan of the Highlander series since it first came out. I simply loved Adrian Paul in his role of tortured hero fighting for justice and survival. Who can resist a character like that?

So one day, I started thinking that there are some amazing series out there in the paranormal/fantasy romance genre, but I couldn't think of a specific one featuring immortals that live under a legal and political system they formed over time. Immortals with their own style of government and their own code of ethics. Basically, a secret society of these special individuals that aims at furthering the interests of its people and the humans they live with. Of course, as with each government, there is opposition—some justified, and some not so much.

Another thought I had was: what if Man had someone—or something—powerful and magical to come to the rescue at certain crucial points in history? Some things could have happened differently—or turned out much worse. And what if Man's fate and future is determined by warring factions of these immortal beings? The germ of this idea started in my mind, and together with my interest in myth and adventure, the Valthreans were born.

The story and practices of the Valthreans constitute the backdrop of each book in the series, the glue that holds them together. Some pretty amazing characters make up the higher ranks of this unusual organization—unforgettable heroes and kickass, determined heroines—and my goal is to tell you their stories and happy endings.
Natalie G. Owens

THE BOOK - AN ETERNITY OF ROSES (The Valthreans: Book 1)

Two lovers separated by an evil curse.
A desperate quest through time.
A love that wants to beat all odds.
And all the while, deadly danger brews around a two-thousand-year-old secret society and the enemy that lives to decimate it.

That was the promise Adrian made to Emmaline. And then, he was gone forever...
It is 1807. Adrian Segrave, Viscount Bournemouthe, and Lady EmmalineDeramore are about to wed and British Society teems with excitement at this imminent love match. But Madeleine de Brandeville, a mysterious Frenchwoman, has her lustful and ambitious sights on the groom. When she sets her cruel plan in motion, she leaves devastation in her path.

Heartbroken, Emmaline embarks on an adventure she'd never imagined having. As the world changes and chaos brews, her fate becomes linked with the Valthreans, a group of immortals who must learn to face a deadly enemy that threatens their place in the human world. But all the while, there is one thing she wants more than any other--to get back her man.

When she finally finds her prize and the intense blue flame of desire burns once more, her worst nightmares are far from over and the toughest battle is yet to begin. Will love win the war in the end?

One reviewer described it as “a fast-paced, loving, lovable romp through time and character and romance … with characters who are so fully fleshed that I felt they were standing beside me.”

Many thanks for inviting me to your virtual home. It is such a pleasure to participate on your blog :). x

You're welcome, Natalie! Thanks for visiting :-)