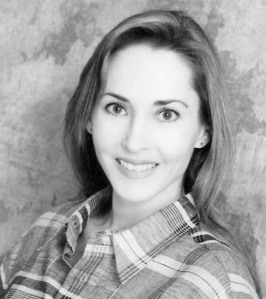 My guest today is S.G. Rogers. Originally from Southern California, she  has lived in Asheville, North Carolina and Laurel, Mississippi. She earned her first black belt in taekwondo from martial arts champion Billy Blanks.  Later on, she earned black belts in taekwondo and hapkido from Master Myung Kim. Currently residing in beautiful Savannah, Georgia, S.G. Rogers writes fantasy and romantic fantasy stories.  She’s owned by two hairless cats, Houdini and Nikita, and lives on an island populated by exotic birds, deer and the occasional gator. Although she’s most often drawn to speculative fiction, she’s been known to break away to write other genres.  Tab is her beverage of choice, but when she imbibes, a cranberry vodka martini doesn’t go amiss.
This post is part of S. G. Roger's  blog tour to launch her latest YA fiction book, A TOURNAMENT OF CHANCE. She's a Tolkien fan and she  decided to share her fondness with us today. Ready to read her post and win a $25 gift card? (see at the end of the post) 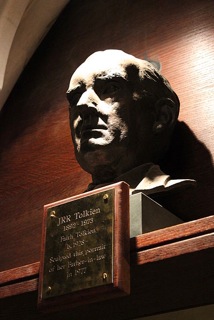 Ah, J.R.R. Tolkien!  The literary works of that brilliant man have spawned legions of fantasy tales, television series, and movies.  The first time I read Tolkien was when I was babysitting.  My charges had gone to bed and I needed to kill time.  One of the kids had THE HOBBIT, so I picked it up. Naturally, by the end of the evening I had to buy my own copy.  After I finished THE HOBBIT, I moved on to THE LORD OF THE RINGS trilogy, and then to THE SILMARILLION.  I was awestruck at the ability of Tolkien to dream up such stories.

When I became a fantasy writer myself, I shied away from writing high fantasy. I didn’t want my work to suffer by comparison to Tolkien, nor did I want to risk writing something ‘derivative’ or a weak knockoff.  After I dove into Norse mythology for a young adult series I was developing, I learned Norse mythology formed the inspiration for Tolkien’s work.  I was relieved to find although we both had the same source material for our stories, the end results could not have been more different.  Tolkien wrote classic epic high fantasy, but my Asgard Adventure series (THE DRUID/THE ACCIDENTAL IMMORTAL) is contemporary romantic fantasy.

Similarities of certain fantasy elements are inescapable, but I strive always to weave my own particular brand of creativity, humor and romance into the mix. My latest release, TOURNAMENT OF CHANCE, while not based on Norse mythology, is the closest I’ve come to writing high fantasy. You’ll find swords and sorcery in a medieval-like era, but also a strong, time-traveling young female heroine. Although there are no orcs, dwarves, or hobbits in the tale, shape-shifting wizards, trolls, and fairies round out my cast of characters.

J.R.R. Tolkien was a master at his craft, no question, but there are still more fantasy stories to tell! So I forge ahead, content in the knowledge that it’s what an author brings to the party that matters most. 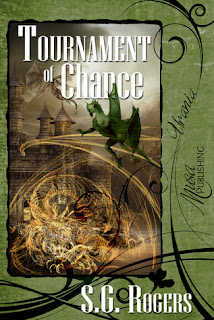 In Tournament of Chance, a hunter’s daughter becomes the spark that ignites a revolution—in time.

When a beautiful commoner enters the Tournament of Chance archery competition, her thwarted victory sparks a revolution in the oppressive kingdom of Destiny. Although Heather never believed the legends about the restoration of Ormaria, after three shape-shifting Ormarian wizards awaken from a long magical slumber, she joins their perilous quest to regain the throne. Heather battles vicious predators and angry trolls to free the wizards’ magic, but at a horrendous cost. She is unexpectedly torn from the arms of the man she loves and hurled back in time to fulfill a prophecy not yet written. The ensuing maelstrom tests Heather’s survival skills, wits, and endurance. Will she become an unwritten footnote in history, or can she trust the magic to lead her back to her one true love?

A muscle in Dane’s jaw rippled. “We must move faster. The longer she’s alone, the more likely it is she’ll encounter something dangerous.”
“She’s done well enough so far, no thanks to you,” Joe muttered.
Dane peered at Joe with narrowed eyes. “What’s that supposed to mean?”
“You’ve shown your distaste for Heather upon more than one occasion.”
“I would never let my personal feelings interfere with my duty to protect the child,” Dane exploded.
“Really? Then why is she lost?”
Dane hands formed fists at his side. As the two men squared off, Shimmer stepped in between. “Jovander, I’ve known Dane much longer than you have. You accuse him unjustly.”
“That is so,” Manny concurred.
“No, no. Don’t bother to defend me. It won’t make a difference. Jovander Chance has a deep seated resentment toward the royal class and doesn’t believe we could ever act unselfishly,” Dane scoffed.
“Forgive me for saying so, but this whole quest is selfish!” Joe yelled. “If it succeeds, you Ormvalders resume ruling the kingdom. Heather gets nothing except for a pat on the back. She’s the only one of us here who has acted in an unselfish manner.”
“You’ve acted unselfishly too, Joe,” Manny said.
Dane smirked. “No, he hasn’t. Haven’t you noticed? Young Joe is quite taken with the lass.”
Joe flushed bright red. “Don’t act so smug, Your Highness. I’ve seen the way you look at her.”
“First you practically accuse me of doing her in, and now you accuse me of having designs on the woman?” Dane thundered. “Make up your mind.”
“First you call her a child, and now a woman?” Joe pointed out. “You should make up your own mind.”
A long, smoldering silence followed in which nobody spoke.

Available in all e-formats from Musa Publishing HERE and Smashwords HERE. Kindle format is available at Amazon. Coming soon to BN.com and wherever fine e-books are sold. To learn more about author S.G. Rogers, visit her blog at www.childofyden.wordpress.com

Take your chances to win a $25 Amazon Gift Card or PayPal Cash in the rafflecopter form below.

Thanks for having me on your blog!

S. G. writes fabulous fantasy! I've been captivated by every one of her books, and I'm amazed at the sheer volume of stories she's put out in a short time. Can't wait to dig into this one!

I love the time element in this book. PLUS the Tolkien-style of fantasy. S.G. is a talented writer with great vivid details! Still reading Tournament of Chance and LOVING it!

Thanks to you, for being my guest, S. G. It's a great pleasure to feature your lovely piece. Tolkien fans are special people :-)
Thanks to Meg and Patricia for dropping by and contributing their comments!

Thanks Patricia and Meg! And I really appreciate you lending me a forum, Maria.