AT THE CINEMA - JANE EYRE 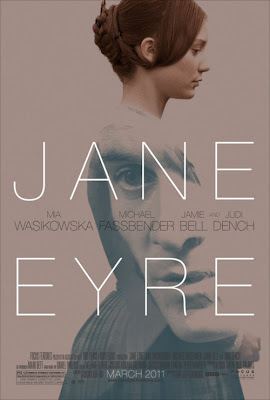 If there is a heroine I deeply sympathized with in my teenage, she was Jane Eyre. She substituted Jo March, who had been my model heroine when I was a child. Jane Eyre by Charlotte Bronte is the book I have most frequently re-read in my life. Strangely enough, I haven't written much about the book or the several adaptations I saw on FLY HIGH. This is the first real occasion I find to discuss my admiration for Jane. Yes, for Jane more than for Rochester.

The new Jane Eyre movie has been released in Italy this weekend and I could see it at last. I wouldn't want bore you with my usual disappointment and frustration for having to watch a dubbed version but I can't avoid it. Let me only say this:  Rochester and Jane conversing in Italian are rather improbable. For instance, "Credete che poiché sono povera, umile io non abbia un cuore né un'anima?"  doesn't sound as touching and powerful a claim as "Do you think that because I am poor, obscure, plain and little that I am soulless and heartless"? to my ears.

As promised, I 'll move on discussing what I saw more than what I listened to. I quite liked what I saw. This is the most gothic version of Jane Eyre I've seen and with the most tender and less ambiguous Rochester among the ones I've admired in the different adaptations so far. Though deeply fascinating, byronic Rochester has never been my ideal hero. So this milder version, less stern  than other ones,  was something I didn't mind at all because Rochester remained as passionate as he needed to be in Michael Fassbender's interpretation.
Jane Eyre looks really very young, so much younger than Rochester, as it is in Charlotte Bronte's story. Mia Wasikowska is convincing as the plain and at times creepy creature who stands and face her older, more experienced, smart, deceitful, teasing, moody master with no fear . I've always liked Jane. She's young, pure and untamed, brave and strong, independent and determined. How brilliant a mind behind a plain look! I loved when she said: "I've never seen a city, never spoken to a man". That's what she is, in very simple words,  when she gets to Thornfield. But how tough she is at coping with her new life there.
Cary Fukunaga's film is quick paced and beautifully shot on the wild windy moors and in gloomy cold residences.
It starts with Jane on the run, desperate and lonely. After spending her life unloved and unwanted, she had just had a glimpse of paradise at Thornfield. But she had painfully to renounce even the last hope of joy. Deceited and disillusioned, "God help me!" , she had shouted and had run away. A really disrupting choice between love and self - respect (Jane and Rochester's heartbreaking separation is my favourite scene in this film).  Her sad story is revealed flashback by flashback, after her meeting with St. John Rivers (Jamie Bell) and her sisters (Hollyday Grangers and Tamzin Merchants).
Judi Dench is a perfect motherly Mrs Fairfax. I even loved her Italian voice. Sally Hawkins is wicked, unfeeling Mrs Reed.
Of course there are slight changes from and big cuts to the original plot. But since Jane Eyre  is one of the timeless classics I've most loved, can you believe if I say I wasn't disappointed?  I'm sure this new adaptation  could appeal  new young adience and bring new fans and new readers to Charlotte Bronte's work.
Jane Eyre (2011) - Imdb
Watch the Italian trailer

YAY! You have it in cimenas already! I have to wait one more week :/ Happy watching :)

I really wish I had read Jane Eyre as a teenager, I think I would have got so much out of it. I've not seen this adaptation yet, but I want to!

this is my review!
http://firstimpressions86.blogspot.com/2011/08/jane-eyre.html

Glad it's finally come out where you are and that you enjoyed it. :) Expectations were high on this production, and for many parts, I think they've done really well.

Honestly I was rather disappointed after watching this new adaptation. And I was disappointed because I found Fassbender so cold and inexpressive. Even when he declares his love, he is no passionate at all. Judi Dench and the moors are the best things in this adaptation. Of course this is my opinion.

Watched this some time ago and even though I really like it I found Rochester a bit too much handsome and "nice" if you know what I mean.
On the other hand, I must admit it's a difficult task to measure with William Hurt, my favourite Rochester at the moment.

This was better than a previous adaptation I saw years ago. I was so moved by how well the main character was played!