I'm not an expert of contemporary  Gothic fiction nor I can say I'm fond of this genre. I've already confessed I never could get to the end of Bram Stoker's Dracula  and I've only recently read a couple of romances with vampires or werewolves as their protagonists. It was fun: light readings to spend a few carefree hours on. (HERE and HERE)
However, this week's topic is also one of the topics I'm working on with my students at school, and I'm glad of that. At least, they - my teenage students -  are really fond of gothic stories! My last year pupils, and I are studying the spread of the Gothic vogue at the end of 18th century,  when the interest in in that new genre was common to all strata of society after the success of the first "gothic tale", The Castle of Otranto by Horace Walpole (1764)
The concept of the "Sublime" , or "horrible beauty" , also influenced the rise of the  Gothic novel in those years through the work of the philosopher Edmund Burke,  where the sublime was linked to both the idea of self-divinity and a celebration of terror. The gothic symbols of the wanderer, the vampire and the overreacher who seek forbidden knowledge reflect the wish to go beyond God, nature and human limits: these figures all are individualists who are not satisfied with their own society.

I find all that extremely interesting, fascinating. What I can't bear instead is violence for violence sake. Macabre or  bloody scenes are something I always try to avoid. So far from what I like!


After Walpole, many other writers achieved great success writing and publishing Gothic novels in those last years of the century, among them  Ann Radcliffe (The Italian, The Mysteries of Udolpho), Matthew Lewis (The Monk) and  William Beckford (Vathek). 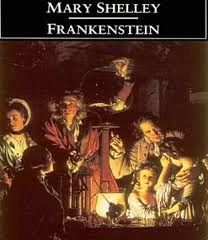 Then,  after about 50 years from the publication of the first Gothic tale, Mary Shelley published an atypical work, a Gothic story which is still considered a great classic with extraordinarily modern ideas and messages: Frankenstein or the Modern Prometheus.
The first Gothic novels had just one purpose: to entertain the readers frightening them. No messages, no themes. The characters were flat, prototypes indeed:  the pure, naive, overreactive, sentimental heroine, the brave, noble  hero who will rescue her from the persecution of the wicked, murderous villain.
Mary Shelley has left us much more than that. Frankenstein is a novel with a complex , multilayered narrative structure, controversial characters and thought-proking themes and messages. 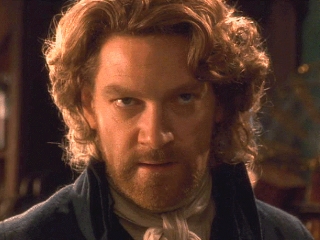 Frankenstein's striking originality lays in its several connections with the ideas of the Romantic Age as well as  in its being Gothic but so distant from the tradition.
It is not set in an ancient castle or convent nor in a Catholic country. Switzerland and the North Pole are the wild, exotic settings chosen by Mrs Shelley.
It does not deal with supernatural events: no ghosts or vampires in it. One of its protagonist is  a creature brought to life through a scientific experiment.
This monstruous creature can be considered Rousseau's "good natural man" . He was born good, generous and naive but was turned into a murderous monster by the rejection of all the human beings he met due to his ugly aspect.
His creator is an overreacher, a modern Prometheus, a tragic, sad hero who is doomed to fail in his challenge to God and Nature. In the monstruous creature he has brought to life he recognizes the worst part of himself: he is the embodiment of his monstruous ambition. The thrilling theme of the double is effectively and doubly proposed here, not only in the pair Victor Frankensten /his creature but also in the one formed by Captain Walton /Victor Frankenstein . The young adventurous explorer spots something of himself in the wretched, exhausted,  desperate scientist : his own dangerous ambition. Anyhow, he has the chance to stop in time and save himself from the same tragic fate. The fortuitous meeting saves him from certain failure. 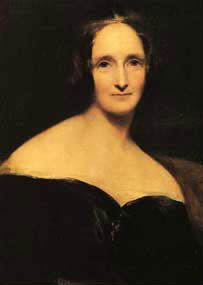 I don't know how well you remember  this novel but I'm sure it is the only horror novel I've always found truly interesting. The reasons are in all the above.

Last but not least, it is also the first science - fiction novel ever written in literature, proposing issues we nowadays still discuss  in Bioethics.

And all this came from a young woman, only 21 years old, who won both the competition against her poet friends - at Villa Diodati, near Lake Geneva,  in 1816 she accepted to challenge Byron and P.B. Shelley  in a writing contest for the best ghost story  -  and  that against Time.

Wonderful Wednesdays is a meme about spotlighting and recommending some of our most loved books, even if we haven't read them recently. Each week will have a different genre or theme. It is hosted on Tiny Library by lovely Sam.
Posted by Maria Grazia at Wednesday, October 26, 2011
Email ThisBlogThis!Share to TwitterShare to FacebookShare to Pinterest
Labels: Gothic Novels, Wonderful Wednesdays

Thanks for taking part even if gothic fiction isn't really your thing!

I studied Frankenstein at school and to be honest, I think we overanalysed it which did take a lot of the enjoyment out of it for me.

@Sam
I found really very difficult to read a book just for the plot. I tend to ... overanalysed. Is it maybe because I am a literature teacher?
Never mind. My students seem very interested and surprised to discover there's always much more behind a story. Well, many of them, discover that Frankenstein is not the name of the creature! What they usually think before reading the book or part of it with me :-/
Thanks Sam for hosting this meme and for commenting!