My task is not an easy one indeed! Saying and not saying to avoid spoiling the pleasure of discovering the details by yourself. Hence, again, go on reading only if you have already seen this episode of Spooks or if you don't mind spoilers.

This episode story-line reproposes and investigates the theme of how hard being a spy can be, especially if you are not  unscrupled or insensitive . So we are got involved and become witnesses of  Ruth's, Harry's, Sasha's, the Home Secretary's (well, he's not a spy!) and, especially, Dimitri's weaknesses, doubts, regrets, fears, wishes.
I love this aspect of Spooks, the introspection - though quick and never boring - into its protagonists' humanity.
In episode 3 Dimitri is asked to honey-trap a young woman to get to her brother suspected of being an anarchic terrorist trying to introduce radioactive material and attempt to the lives of many.
When Erin asks him to get as close as he can to the girl to discover as much as he can about her brother, he says candidly: " I thought we didn't do that. Erin, I'm not comfortable with it".
Tender sweet naive Dimitri. "Men are lying to women all over the world right now to get them into bed. Don't  over-think it", answers Erin.  And he does have to make efforts to overcome his scruples and bed the poor unaware terrorist's sister who's  totally hooked by gorgeous shy Ryan (Dimitri's cover name). Their first date is so incredibly weird and sweet at the same time. How disappointed will the girl be at discovering she was tricked and used? We can just imagine. Erin's infallible apologizing letter, included. Yes, she writes one to relent Dimitri's sense of guilt in the end. 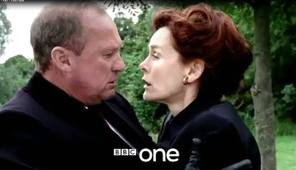 Surprise, surprise! Even ice-cold Russian spies have a heart and cry! Moving scene between mother and son. Sasha wants to know from Elena why she betrayed her country. He had to kill to hide the truth. And sobs.
Poor Ruth! She's taken aback a couple of times in this episode and she's really puzzled but as strong as usual: Harry's total trust isn't there but he asks her something he knows will make her suffer: to meet Elena, the woman from his past,  in order to get her communiques. They meet in front of a tragic painting at the National Gallery, The Execution of Lady Jane Grey by Paul Delaroche. A premonition?
Then, unexpectedly, Ruth discovers she's got a secret admirer who wants her to change alliances, leave Harry and section D to work (is it just a business proposition?) for ... him.
Not going to say more. I've said too much.  Understood. I'll stop. No, just one more! They discovered who's behind the attempt to Gavrick's life, behind the stolen computer, behind the murder of their friend. 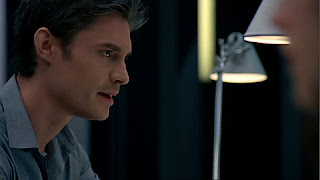 How sweet was Dimitri! Wasn't he?
I hope they (meaning the scriptwriters) don't have the time (only 3 episodes left!) to destroy and turn  his character upside down! They are persistent offenders and should face a trial once and for all.  Will they reveal he's there by mistake because he was mistaken for a tough navy officer while he actually was a very good boy from a seminary?
After Lucas North was turned into John Bateman I suspect everything's possible and nothing is too absurd for them.
Did I like this episode? Yeah, quite good. Though I was awkwardly relaxed for being there watching Spooks!


Watch The Cost of Being a Spy  (interviews from Series 9 set)
Posted by Maria Grazia at Thursday, October 06, 2011
Email ThisBlogThis!Share to TwitterShare to FacebookShare to Pinterest
Labels: BBC Drama, BBC programmes, Spooks

I have written a comment twice, but blogger does not let me publish them! Third time lucky? Anyway, in view of Spooks' past history, I think it will end in a carnage. Although I'm not so attached to Dimitri's character, I wouldn't like him to be the next fatality. I'm pretty sure that Harry's love child will end up badly so to destroy Harry completely. Don't care much about Erin, but Ruth, please do not touch her! In any case I will be very sad at the end of Spooks 10. An absolutely unforgettable drama. Ciao. A.x

@lunarossa
Well, you did it at last! I'm sorry you had troubles while commenting. I just don't understand why that happens. But third time it worked, it seems.
I'll be very sad too. I didn't read anything to avoid to know about what is going to be. do you really fear they will all die? I only hope everything they decide will make sense. It must be unforgettable, I couldn't bear being disappointed. Ciao! MG

Great post. I too felt for Dimitri in this episode. I'm sorry Max Brown has so few episodes left to make his mark. My feeling is right now anything can happen,anyone can be the betrayer at the end, there is mistrust everywhere. But why did Calum not identify the second lady that Tariq saw? Only three more episodes to go...

@Musa/Fabo
As I said in the previous answer, I only hope they won't disappoint us in the end! Thanks for your comment :-)

This is a message I received from K/V, one of my regular commenters. I'm posting it here for her:

@Musa/Fabo: I thought exactly the same thing about the second lady: she was quite unmistakable!
Sigh, only 3 eps till the end: personally, I don't mind if they do a carnage, provided that the scriptwriters don't end it in a mess, as they did with Lucas North story in ser. 9.
K/V
P.S. Blogspot is playing tricks with this comments window, even if I'm posting as 'Anonymous'. It's the 10th time I'm trying to post my comment, FX!