It's time to wrap up beautiful Period Drama Challenge.This is my last review, the 4th in the section Victorian Mist. The 8th task on the whole. Thanks to LIGHTS, CAMERA ... HISTORY for hosting it. It'll go on till July 2010.


Sally Lockhart's London, misty Victorian London, has a surplus of opium dens, mediums and boarding houses, it is a place where there were still enough shadows to conceal casual murder and where bodies could be buried beneath mud floors. It is in this world that Sally Lockhart hears of a priceless ruby , a precious stone that brings violence and death into hers and many other people's lives as well as  the memory of a murder in the cloud of opium smoke. 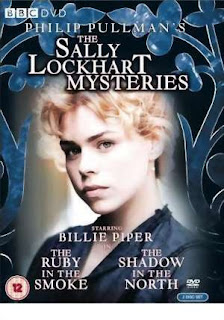 Sally Lockhart is a brave Victorian heroine created by writer, Philip Pullman. He wrote four novels in this series


• The Ruby in the Smoke

• The Shadow in the North

• The Tiger in the Well


BBC has adapted the fist two ones so far, starring Billie Piper as Sally.


Episode 1. The Ruby In The Smoke 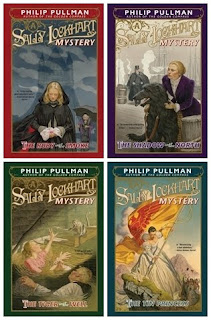 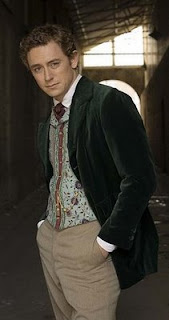 opens in 1872 with young Sally Lockhart finding a message from her father, joint owner of the Lockhart & Selby shipping firm and who recently went down with all hands on the Lavinia in her sinking in the far east. The letter tells Sally to beware of the Seven Blessings, which means nothing to her but which is something of a dire warning for others as, when Sally asks the company's secretary about its meaning, he drops dead of fright before her very eyes. In the same office, Sally meets Jim Taylor (Matt Smith) and together they investigate why death seems to follow the Seven Blessings. The road to the truth takes in murder, the smuggling of opium and the mysterious Ruby of Agrapur. And all the while they are watched by the wicked Mrs Holland ( Julie Walters). Sally makes new friends who will become her new family, Frederick Garland ( J.J. Feild ) and his sister, who will support her in solving the mystery … 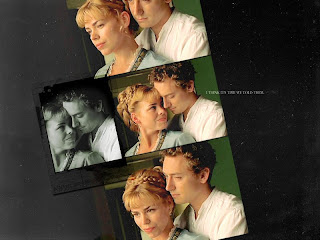 Six years have passed . Jim and Frederick are running a detective agency and Sally hasn't just found herself a dog ( a big black frightening one)  but now runs a well-regarded financial consultancy.  The Shadow In The North is slightly the better of the two films  but only in its focusing more on the story than on the atmosphere. Briefly... 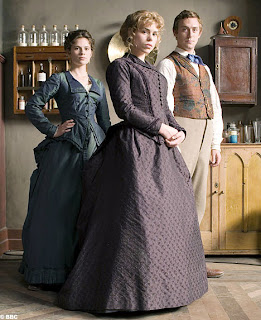 The story is set in 1878 when an old woman loses a large sum of money by investing in a British shipping firm. Twenty two year old Sally Lockhart, a financial adviser, sets out to investigate the cause of the sunken ship and learns about a wicked plan to release the Hopkinson Self-Regulator, also known as the Steam Gun. Pursuing this, she becomes tangled in the stories of a young magician, a jolly old medium and Lord Wytham, whose debt has forced him to marry off his daughter for money...

Ahh, you're becoming such a great resource! I shall definitely have to check these out!