Mystery stories are not my cup of tea but when it comes to classic fiction, well, it’s different. I love Conan Doyle’s Sherlock Holmes or Oscar Wilde’s Picture of Dorian Gray as well as Agatha Christies’s Poirot or Miss Marple. 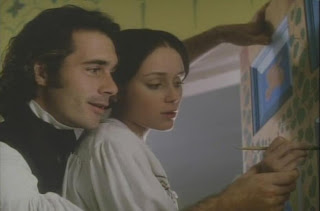 I have always read about THE MOONSTONE as the first detective story in English Literature (or in literature in general?) but never actually read the novel. Due to my constant lack of free time and to the thickness of this book I decided ( I perfectly know it is not the same!) to buy the DVD, since I heard two of my favourite Brits where in it: GREG WISE and KEELEY HAWES. I wasn’t disappointed. Not at all . Though I found it rather unbelievable in more than one points. Mysteries are mysteries and often their explanation is not at all convincing… I usually prefer when they aren’t completely solved or unveiled; when you,  reader  or watcher, are asked to contribute your own hypothesis with your own fantasy.

Now… to the point.

This mini-series was aired in 1996 on BBC1 then also in the US for Masterpiece Classics in 1997. 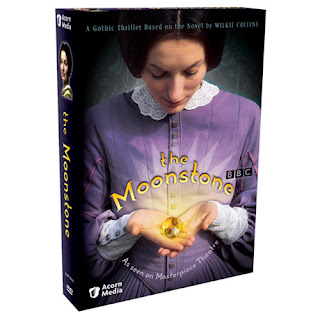 The adaptation stars a remarkable cast of actors and is a faithful adaptation of Wilkie Collins' mystery (1868) in which the disappearance of a cursed diamond sets the background for an absorbing detective story. The Moonstone was originally serialized in Charles Dickens' magazine All the Year Round. The Moonstone and The Woman in White are considered Wilkie Collins' best novels. Besides creating many of the characteristics of detective novels, The Moonstone also represented Collins' social opinions by his treatment of the Indians and the servants in the novel. Collins adapted The Moonstone for the stage during 1877, but the production was performed only two months. 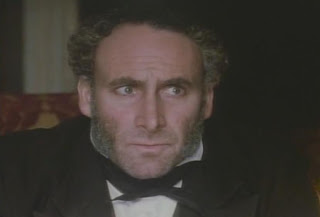 Rachel has just inherited a very precious stone from her uncle and she wears it to her 18th birthday party, but that night it disappears from her room. Suspicion falls on three Indian jugglers who have been near the house; on Rosanna Spearman, a maidservant who begins to act oddly and who then drowns herself in a local quicksand; and on Rachel herself, who also behaves suspiciously and is suddenly furious with Franklin Blake, to whom she has previously appeared to be attracted, when he directs attempts to find it. Despite the efforts of Sergeant Cuff, a renowned detective, the house party ends with the mystery unsolved, and the protagonists disperse. 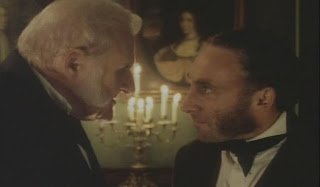 A year passes by and there are hints that the diamond was removed from the house and may be in a London bank vault, having been pledged as surety to an unscrupulous moneylender. Rachel's mother dies, increasing her grief and isolation, and she rejects a marriage proposal from her cousin Godfrey Ablewhite, a philanthropist who was also present at the birthday dinner. 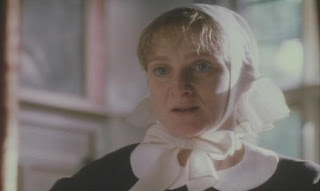 Finally Franklin Blake returns from travelling abroad and determines to solve the mystery with the help of his faithful butler, Mr Gabriel Betteredge. He first discovers – reading a letter she had left to him before killing herself - that Rosanna Spearman's behaviour was due to her having fallen in love with him. She had found evidence (a paint smear on his nightclothes) that convinced her that he was the thief and concealed it in order to save him, confusing the trail of evidence and throwing suspicion on herself. In despair at her inability to make him acknowledge her despite all she had done for him, she committed suicide, after hiding the smeared gown and the letter. 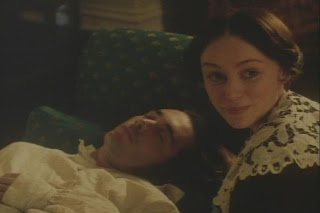 Now believing that Rachel suspects him of the theft , Franklin plans a meeting to confront her. To his astonishment she tells him she actually saw HIM steal the diamond and has been protecting his reputation at the cost of her own even though she believes him to be a thief and a hypocrite. Now thoroughly bewildered, he continues his investigations and learns that he was secretly given laudanum during the night of the party (it was given to him by the doctor Mr. Candy who wanted revenge on Franklin for criticizing medicine and who wanted to sleep more easily due to quitting smoking); it appears that this, in addition to his anxiety about Rachel and the diamond and other nervous irritations, caused him to take the diamond in a narcotic trance, in order to move it in a safe place. A re-enactment of the evening's events confirms this, but how the stone ended up in a London bank remains a mystery only solved a year after the birthday party when the stone is redeemed.

How did the stone end up in a London bank? Who took it after Franklin first stole it? Let’s try to leave something to be discovered, in case you want to read the book or watch the TV- movie.

Of course, in the end , the mystery IS solved , Rachel marries Franklin, the Moonstone is restored to the place where it should be, in the forehead of the Indian idol from where Rachel’s uncle had stolen it.

This was a good movie, not their best, but good. Ironically I JUST found this book at the thrift store on Wednesday!

@Jenny Kerr
Hi, there! It's always nice to hear form you, Jenny! You're back at last, it seems. Yes, this movie was good but not one I think I'll watch again and again... Enjoy your return home. Hugs!

This film looks really interesting. I'll have to check it out. I've actually had this novel on a "to be read" pile for years, but never taken the time. I'd be interested to see how the movie portrays what I know about the novel. Thanks for pointing this out to me!

I'd never seen/heard about this one, so thank you for bringing it to my attention! I will have to add it to my list. :)