A FALCON IN LOVE WITH A DOVE - EPISODE 3 - PHOTO STORY

Giulio goes to the Campireale's to give them back Fabio's dead body. He kneels in front of Elena and asks forgiveness for killing her brother. She's shocked and sends him away. 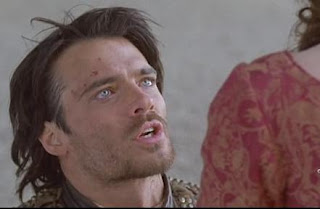 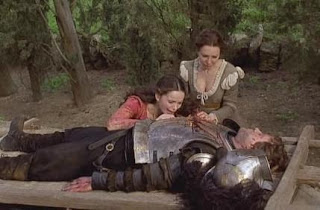 Her mother wants revenge and gives one of the servant the order to find two killers: Giulio Branciforte, her son's murderer must die. 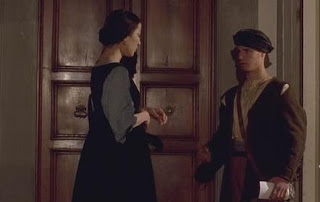 Lisetta, meanwhile, has found Giulio, wounded and fainted, in the wood: she's happy to take care of him. 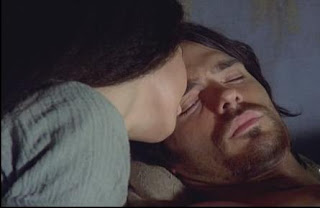 Elena promises her mother she won't see Giulio any more. She can't love her brother's murderer, she will marry Prince Savelli. 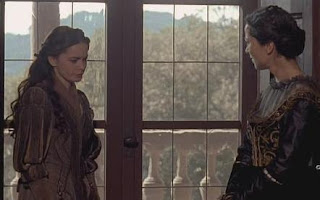 Giulio goes to Cardinal Colonna and lays down his sword ... 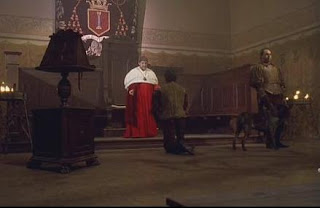 He swears he won't fight any more, he doesn't want to kill again or see his mates killed again. 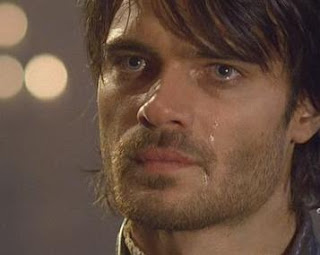 Elena orders two builders to close the hole in the wall through which Giulio entered their residence. 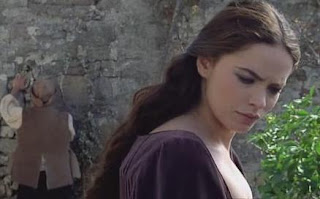 Giulio's mates are worried: they know his life is at risk. The Campireale want him dead, he must leave his house.

Giulio leaves his house, but risks his life to see Elena again. He enters the palace disguised as a friar. Elena refuses to see him, but he speaks to Marietta, her maid. 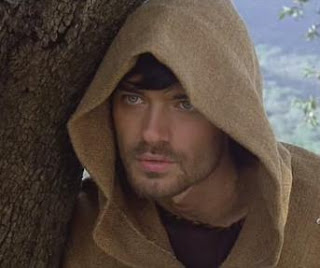 He gives her a present for Elena: Ranuccio's necklace. It has two halves...

One half is for Elena and one for himself. The two halves separated are meaningless. This is his message to Elena. Mariuccia promises to give her lady both the necklace and the message. 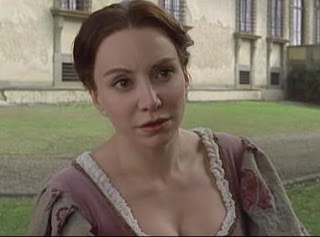 Elena says that it is true, the two halves separated are meaningless but Giulio is the one who broke the whole, who destroyed their happiness. She asks Marietta to bury the necklace and "Paolo and Francesca" book in the garden.

Prince Savelli arrives, he wants to see his future wife, Elena, and asks about her feelings after her brother's death. 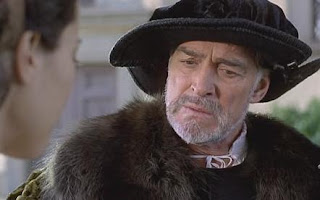 Elena tells her mother and the Prince that she doesn't want to think of the wedding. She needs to reflect and meditate. She will go to the convent in Castro where she was educated. 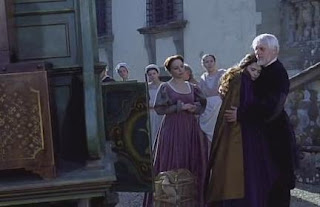 At the convent, Elena meets her dear friend Donna Vittoria, who helps her to see inside her soul, to understand what she really wants. 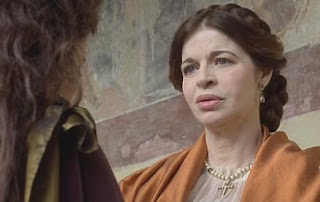 While praying in the convent church, Elena is breathless ... 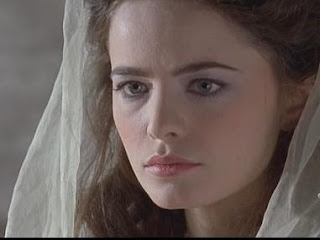 Giulio is there! He has come to Castro to see her. 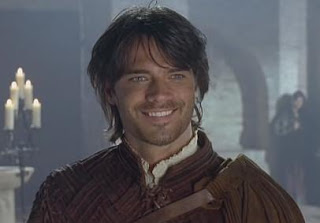 But also the Prince is there. He can't resist any longer, he wants to marry her as soon as possible. He gives Elena a precious necklace which she can't accept. Elena decides to confess to the prince that she loves another man and that she doesn't intend to marry him. The prince leaves the convent furious. 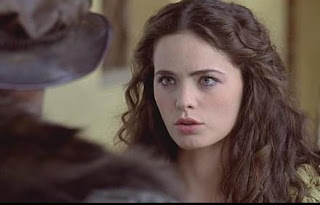 Prince Savelli directly goes to Elena's mother's and menaces her: He will have Elena at any cost. She must remember and respect their deal.

Giulio enters the convent at night: he asks Elena to forgive him. He says :" If you want me to leave, just tell me you do not love me, now."

Elena can't say that... but after spending the night together, when Giulio asks her to marry him... 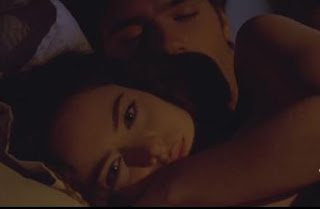 She answers: "I can't live with or without you. I'd kill myself if I were brave enough, but I'm not. There's only one thing I can do now: bury myself inside this place forever. I'll be a nun"

When her mother hears Elena's intentions, she takes time and pretends to suggest her daughter to marry Giulio, instead. She will accept their marriage and will convince her husband, too. Elena trusts her mother and writes Giulio about the good news. 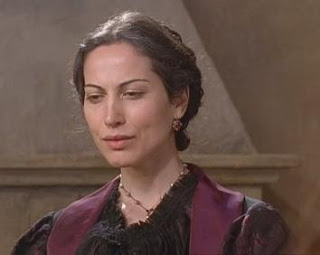 Her mother wants, instead, to be sure her killers will find Giulio and murder him. The wedding will be a trap for her son's killer. 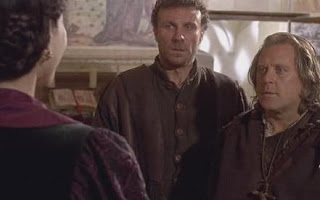 Giulio decides to kidnap Elena from the convent with the help of his mates. Lisetta hears of their plan and denounces it to Elena's mother.

Love how in depth your reviews are. Too bad i cant get half of the movies you mention.

Hi MG, finally something good on Italian tv which seems otherwise swallowed up by X-Factor and BigBrother (or big bother as they call it here!!). Hope you're fine. All the best. Ciao. A.

@Avalon
If you refer to Italian TV movies, I can understand, you can't find them. They are seldom sold to the English -speaking market.But most of the film or TV movies I watch and review are British products? Have you tried on line?
@lunarossa
Ciao!!! I'm so glad to hear from you again! Is everything ok? Was your Venetian holiday good?
X-factor, Big-brother and stuff like that are what make me watch DVDs bought on line.This TV movie is rather good but at least it is an attempt to do period drama. Some of the actors are very good but the protagonists... well.... they are extremely beautiful. My favourite British TV series is back tonight. No RPJ any longer, I'm sorry for you, but Lucas North is a very good secret agent, isn't he? ;-) Thanks for commenting!