WIVES & DAUGHTERS - From the book to the TV screen 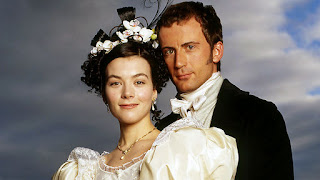 I've recently read and posted ( HERE ) about Elizabeth Gaskell's beautiful last unfinished  novel, Wives & Daughters, and I 've soon after decided it was time to watch the BBC 1999 adaptation in four episodes I had in my DVD collection but hadn't seen yet - I usually prefer reading the book first!

The script was by Andrew Davies, who also adapted for the screen several of Austen's works, among other classics.

It does not very often happens  to me , while comparing a book to its filmed adaptation, but it seemed I was re-reading the story, I was not at all disappointed at what I was watching and listening to. Very little, insignificant changes didn't interfere with the atmospheres and characterizations Gaskell had wanted to convey. I particularly loved Justine Waddel as Molly Gibson, Keelye Hawes as Cynthia, Rosamund Pike as Lady Harriet and , infinitely, Michael Gambon as Squire Hamley.

If you look for another John Thornton in Roger Hamley, leave it, you won't find one. He's rather dull , too patient , too naive to be compared. The hero and the heroine in this story, that is Molly and Roger, are the symbols of unselfish love, they are so generous and ready to self -denial that one is let to think they are rather unbelievable characters. Too good to be true. But I like them, though they can sound dull,too sensible or too little passionate. What I appreciate is that  they can really love people.

If there is something I didn't much like in this series is ... the ending Davies wrote. It was not what I expected.  It was a happy ending, of course, as Mrs Gaskell had surely planned, but not as lively or as exciting as I had imagined it. Judge yourself watching the clip below.

Mrs Gaskell narration had stopped at Roger Hamley waving at Molly from afar, outside her house, under  heavy rain. Then he leaves for Africa for two years... See what happens in the Tv drama, instead.

I really like this TV version of W&D. It's very faithful to the book. I agree with you that the two main characters are very different from the ones in N&S, but the environment they live is quite different too. I quite like the ending Davies wrote. I think it would be different if it had been written by Mrs Gaskell, but we'll never know exactly what she had in mind back then.

I'm so glad that you liked the adaptation. I think it is wonderful, myself. I must disagree on two counts, however. I don't find Roger dull at all, and can understand why Molly is drawn to him--his interest in the world, science and progress makes him a true Victorian, and not unlike Thornton in that regard, though he doesn't brood. He's a very attractive hero in my view.

I liked the ending--I thought it consistent with who Molly was and became and what her relationship with Roger was bound to me like.

The first time I watched it, I remember a feeling of warm satisfaction and a sense that all was right in the world after all.

Ok finally a movie available in the states. It is in my Netflix queue now but it wont be until after the Holidays that it will come because the kids have over 20 movies lined up for the season.
By the way did I tell you how much I enjoy your site? All the great movie recommendations!

I also ordered Nicholas Nickleby. Have you seen this?

@Avalon
Yes, it is one of my favourite Dickens and it is in my DVD collection.
I'm glad you enjoy my little online corner.Thanks for being so kind and commenting.
@JaneGS
I love your pertinent punctual comments. Never mind if we don't always agree. It is more interesting, isn't it?
@Luciana
Sorry for answering only now and in a hurry. I'm so busy these days!
Going back to school in a while. Just wanted to thank you for contributing. Hugs!

I read Nicholas Nickleby so long ago I don't even remember it but hoping the movie will bring back the memories. I like it when the movie actually goes by the book.

I love the movie Wives and Daughters, I've yet to read the book but it is on my list. I really like both Roger and Molly's characters.

I recently saw this movie and really enjoyed it! Gaskell is such a great story-teller. I also LOVE "Cranford" which is based on 3 of her stories. Have you seen it?

@Katherine
Thanks for commenting. I've visited your beautiful site. Great stuff!
@Nat
Yes, I saw Cranford too. It was lovely. I lovel Gaskell's novels.

If you look for another John Thornton in Roger Hamley, leave it, you won't find one. He's rather dull , too patient , too naive to be compared. The hero and the heroine in this story, that is Molly and Roger, are the symbols of unselfish love, they are so generous and ready to self -denial that one is let to think they are rather unbelievable characters. Too good to be true. But I like them, though they can sound dull,too sensible or too little passionate. What I appreciate is that they can really love people.

I believe this is the problem I not only have with the Roger Hamley character, but with the Molly-Roger romance, as well.