THE LORDS OF THE NORTH BY BERNARD CORNWELL - BOOK REVIEW 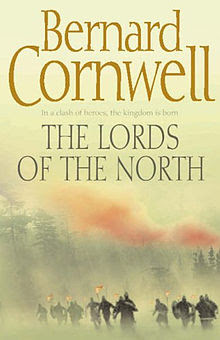 The Lords of The North by Bernard Cornwell

The third installment of Bernard Cornwell’s bestselling series chronicling the epic saga of the making of England, “like Game of Thrones, but real” (The Observer, London)
After achieving victory at King Alfred’s side, Uhtred of Bebbanburg is returning to his home in the North, finally free of his allegiance to the King—or so he believes. An encounter with a vicious slave trader introduces Uhtred to Guthred, the self-proclaimed King of Northumbria. Curious about Guthred’s astounding claim, Uhtred follows him north. But he soon discovers fate has another incredible surprise in store, and begins an unexpected journey that climaxes in the midnight siege of a city thought impregnable—a dangerous seige that results in the forging of England.
Lords of the North is Bernard Cornwell’s finest work yet—a breathtaking adventure, but it also tells the story of the creation of English identity, as the English and Danes begin to become one people, appropriating each other’s languages and, thrillingly, fighting side-by-side. (from Amazon.com)

How did I come to read it? 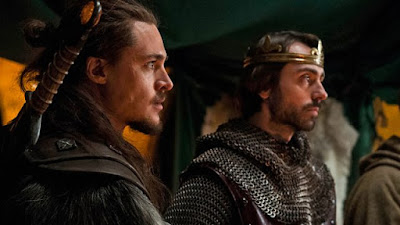 What drew me to reading “The Lords of the North”  was my surprising reaction to the BBC TV series “The Last Kingdom” based on the first two books in Bernard Cornwell’s  saga. I loved the series, which I honestly didn’t expect when I had a look at it by chance.
I was actually doing something for my job, looking for interesting exciting video materials to make my lessons about medieval history less plain. How can one make teenagers love that complicated period in British history when Alfred the Great managed to unite all the Anglo-Saxon kingdoms and defeated the Vikings? Show them a trailer and a few clips from a TV series which turns cold facts into cool stuff. Could Uhtred’s adventures among the Saxons and the Vikings work the magic?

What I usually search for is gripping materials but simple language, more than historical accuracy. My students are non-native speakers, foreigners trying to learn English. What I need is visual/audio aids which can  motivate them both to study their history/literature book and to discover more about those distant historical figures and periods. At the same time, they can improve their language skills.

Now, back to my main purpost after this digression. I am quite obsessed with my profession, aren't I? Once a teacher, always a teacher.

The Lords of the North is a page-turner, with good descriptive pages and hilarious dialogue exchanges. The story is followed by Uhtred’s point of view and narrated by the protagonist in first person and in retrospective. He is a very old man looking back at his adventurous long life. This makes the reader deeply aware of his incredible irony and smartness, as well as his flaws, impulsiveness and extreme loyalty. Loyalty, a defect, you wonder? It can be a limit and it is a great one to Uhtred: once he gives his word, he is bound to it at the cost of his freedom, his happiness and his own life.
I’ve never been so entertained and amused while reading stuff meant predominantly for a male audience. But battles, violence, killings, beheadings, military strategies are part of such a fast – paced, deeply  involving , highly entertaining and well-written story that you forget and forgive any bloody detail.

Quoting myself from my review of the TV series inspired to this saga:

“What makes Uhtred so intriguing is his being a complex character in search for his identity. He trusts his instinct and his sword, he doesn't  believe in the God the Saxons so blindly worship. He believes that "destiny is all". He keeps his sense of freedom refusing to bow down to conventions. He knows how to deal with the Saxon order. He admires the fact that Saxons are more educated, but he also loves the freedom and craziness of the Danes. The blend between his Anglo-Saxon origins and his Viking upbringing is what makes Uhtred such an interesting  character” 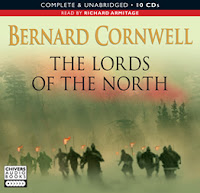 Non-stop action, brutality and brilliant twists and turns, intrigue and betrayal, love and war, great characters and thrilling moments are what "The Lords of the North"  is made up of.

My adventure in Corwell's violent world was shielded and made smoother by the support of the audiobook version of "The Lords of The North", wonderfully read by Richard Armitage. Here's a sample of his velvety, exquisite accompaniment to my reading pleasure. Especially his delivery of the opening lines will stay with me forever, with its powerful gravitas and its deep, dark tone:
"I wanted darkness. There was a half-moon that summer night and it kept sliding from behind the clouds to make me nervous. I wanted darkness."

I like the Observer's description of the book. Encompasses it all.

Really like this idea of teaching history, has always been my favorite subject at school! Unfortunatly there aren´t many good films and books about early german history, we went by the normal school book. I have started this series ( up to book 4 until now and continuing) and really like them. Unfortunatly i cannot find the audiobook version you mentioned. The given link leeds only to a seller wo is not in business anymoore. Is there any other way to get a copy somewhere ?