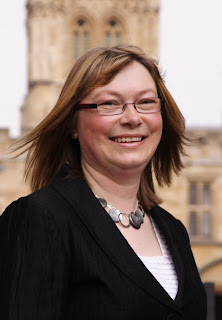 It's a great pleasure to introduce today's guest:  bestselling UK author, Nicola Cornick! Nicola studied history at London University and Ruskin College, Oxford. She writes historical romance for Harlequin HQN Books in the US and MIRA Books UK. She is also a historian working for the National Trust at the seventeenth century hunting lodge, Ashdown House. A triple nominee for the Romance Writers of America RITA award, Nicola has been described by Publisher’s Weekly as “a rising star of the Regency genre.”
Don't miss the chance to win a paperback copy of Nicola Cornick's latest book, Forbidden, as well as a beautiful historically themed set of notepaper. The giveaway is open worldwide and ends on 12th September. What do you have to do to get your chance? Leave a comment below this post and don't forget to add your e-mail address. Good luck!

When I set out to write Forbidden, the final book in my Scandalous Women of the Ton Series, I didn’t intend to write a fairy tale. What inspired me first was the theme of the series – women doing exceptional and sometimes “scandalous” things by the standards of the Regency period or women who found themselves in scandalous situations. Previous books in the series had included heroines who were travellers, one who was a political cartoonist and a heroine who was a divorced woman. Forbidden was intended to be very much within that theme. The scandalous element is that it features a “pretender,” an heiress who had been given up as dead and who comes back twenty years later to claim a title. Her case is a cause celebre; she becomes a celebrity overnight, the most talked about woman in London, her past and present life dissected in the scandal sheets. However the story of Forbidden is also a fairy tale. My heroine, Margery, was a lady’s maid with ambitions to be a confectioner. That was the first twist; Margery did not really want to be “Cinderella” transformed into the richest heiress in the kingdom. She was happy with her life as it was. She had a family she loved and a job she was good at and she had ambitions that in no way involved giving up her current life and her freedoms and taking on the responsibility of running a huge estate.

The Cinderella story is a powerful one. It is the ultimate rags to riches, dreams come true ideal. The innate quality of the heroine shines through, no matter her circumstances or the way that other people treat her. The romance of the story is appealing as well, the idea of being swept off one’s feet by Prince Charming. But fairy tales can be cruel too. In Margery’s story there is a price to pay for her newfound riches; in inheriting the Earldom of Templemore Margery disinherits Henry, her very own Prince Charming who was the heir before she was found. Her success leads to his downfall. It also creates a very powerful barrier between the two of them because for all their attraction, Henry will not be a fortune hunter like his father was.

I have to admit that I also enjoyed indulging in the more material elements of Margery’s Cinderella transformation. There were the gorgeous gowns, the beautiful houses, the dazzling Ton balls and the of course the sumptuous golden slippers! I share with my heroine an enjoyment of beautiful shoes and have if not an extensive collection of my own then I hope an elegant one! A very fun part of my research was dipping into the history of footwear through different historical periods and seeing what was considered fashionable. I loved the idea that the sight of women’s feet could inflame all sorts of passions because normally they were kept tucked away and hidden beneath those long skirts.

Forbidden is a tale of romance and passion, adventure and mystery, of finding oneself and learning what is important. I hope it also captures the poignancy and the hint of darkness that one finds in a fairy story along with all that lovely romance and Cinderella sparkle!
Nicola Cornick

As maid to some of the most wanton ladies of the ton, Margery Mallon lives within the boundaries of any sensible servant. Entanglements with gentlemen are taboo. Wild adventures are for the Gothic novels she secretly reads. Then an intriguing stranger named Mr. Ward offers her a taste of passion, and suddenly the wicked possibilities are too tempting to resist….
Henry Atticus Richard Ward is no ordinary gentleman. He's Lord Wardeaux and he is determined to unite Margery with her newfound inheritance by any means—including seduction and deception. But when the ton condemns the scandalous servant-turned-countess and an unknown danger prepares to strike, will Margery accept Henry's protection in exchange for her trust?

Maria Grazia, thanks for the giveaway!
The plot sounds interesting. I'd love to read this book!

Sounds great, and I love the cover. Thanks for the giveaway.
lcbrower40(at)gmail(dot)com

Thank you for sharing a great giveaway.

Thanks for the chance to win! Sounds like a great read!
natasha_donohoo_8 at hotmail dot com

I love the story and the cover is so beautiful, thank you for the giveaway!

Sounds intriguing. Thank you for the giveaway!
cherringtonmb at sbcglobal dot net

I'd like to read it thanks for the giveaway.

It sounds great!
Thanks for the giveaway.

I have some of her books on my TBR for ages, I don't know why I haven't tried one yet. Thank you for the giveaway

I think this novel is different than most historical romances I've read before. I like the idea is not some pampered lady of the "ton" but a hard working servant who is suddenly bestowed with a title. I think I will like it very much. I have read great reviews of Ms. Cornick. I will def try her.

Please enter me in the giveaway in the meantime!

Sounds like a very interesting story and I love the cover!

I'm curious how Margery will go from maid to lady. ^_^

Thanks for the great giveaway!

That sounds like I book I would really enjoy!
Fingers crossed ;)
iwanttobeapinup[at]wp.pl

Sounds fabulous! We all love a fairy tale! Added to my TBR list. Thanks.

Please oh please let me get my hands on this book! it sounds fabulous <3

dear me i forgot my email address

Dear Maria Grazia and Nicola, thanks for the interesting article and the chance of a giveaway book. I've read most of Nicola's books and the rest of them (including this one) are on my wishlist! I really enjoy them - great stories, memorable characters, excellent writing - do try her novels if you haven't done so already. Best regards, Julie
P.S. To be honest, I will buy this even if I don't win the giveaway!

I've never rad on of your books before and this seems a perfect time to start !

I have never read one of your books before *blush* and would love to start with this one. The stationary is a lovely bonus !
debra(dot)ribbans(at)talk21(dot)com