AUTHOR GUEST POST AND GIVEAWAY - KAREN ESSEX, TRAVELLING FOR DRACULA IN LOVE OR HOW TO RELOCATE A VAMPIRE 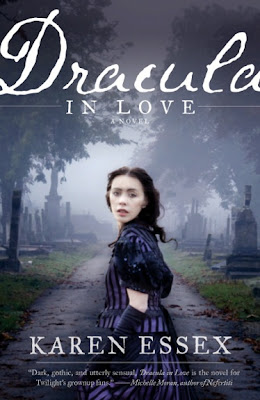 Readers often tell me that they take my novels on holiday as travel and history guides.  I love giving readers an experience on the page, but I love it even more when they are inspired to leave their armchairs and experience the characters and the history firsthand.  As an historical novelist, nothing informs my work like travel.  I love to walk in my characters’ footsteps, breathing in the air that they breathed, literally sharing molecules with them.
For Dracula in Love, which recreates Bran Stoker’s Victorian Gothic thriller from the perspective of Mina Harker, the vampire’s eternal muse, I planed to visit all of Stoker’s original haunted settings, but I also wanted to add some new geography to an old story.  Mina needed a history and a place of birth, both missing in the original.  Moreover—and more radical—I wanted to disentangle Dracula from his Transylvanian roots.  After all, Stoker made up that Dracula lived there.  Why couldn’t I change it?
My first step was to relocate myself to London and into a temporary flat in Pimlico, where early in the story, a naïve Mina dreams of settling with her future husband, Jonathan Harker.  Later, I moved to a neighborhood developed in 1890, the year in which the novel is set.  (My flat, coincidentally, is not far from where Bram Stoker resided.)

Without intentionally planning it, I ended up literally living in the settings of my book!  I spent part of my days wandering through the various collections at the Victoria & Albert Museum and the pre-Raphaelite room at the Tate.  I soaked in the atmosphere at Highgate Cemetery, where Mina’s unfortunate friend Lucy is buried, and on Fleet Street, where another female character Kate Reid, a lady journalist ahead of her time, lives and works.  I ate and drank in London’s historic pubs and restaurants, some of which became settings in the novel.
I also traveled to another famous Stoker location, Whitby, on the Yorkshire coast, taking the same route Mina would have taken.  I landed there during Goth Weekend, when vampire fans make an annual Halloween pilgrimage.  There, I was treated the same windswept cliffs, haunted churches and cemeteries, and red-roofed Victorian skyline inspired Stoker.
In order to give Mina a history, I traced the roots of her maiden name, Murray, to Sligo, on the west coast of Ireland.  I then discovered that Stoker’s mother was born there—a happy coincidence—and that he’d been influenced by its ghost stories and mystical folklore.  With its rocky sea-scape, ancient Celtic monuments, ominous skies, and fairy mounds, Sligo was indeed the perfect place for a girl with preternatural gifts to be born, and for a vampire to discover and fall in love with his obsession.
But I still needed to find a new home for the vampire himself.  Fortuitously, while reading a collection of Stoker’s handwritten notes, I discovered that his original choice for Dracula’s home was Styria, in southern Austria, so I made a reconnaissance trip to explore its possibilities.  Again, I discovered a layered, lush landscape, fascinating Gothic and Baroque architecture, and a rich (and spooky) folkloric history, rife with tales of goblins, succubi, and witches.  The city of Graz, perfectly preserved because it was not bombed in WWII, provided a great substitute to the Budapest of the original.  And the surrounding countryside, with its foreboding mountaintop castles and inns, proved an evocative setting for the vampire’s lair.
Though I worried over readers missing the Transylvania backdrop, I’ve had no complaints, not even from Dracula himself, who does make noise if provoked.  I am guessing that he is as happy to live in southern Austria as I was to visit it.

Karen Essex is the national and international bestselling author of LEONARDO'S SWANS, KLEOPATRA, PHARAOH, and several other acclaimed novels, as well as an award-winning journalist and a screenwriter. She has written and developed many projects for major studios and networks and is currently developing a television series with Lions Gate Entertainment. Her books are published in twenty-nine languages. A native of New Orleans, she divides her time between Los Angeles and London.

In this wonderfully transporting novel, award-winning author Karen Essex turns a timeless classic inside out, spinning a haunting, erotic, and suspenseful story of eternal love and possession. From the shadowy banks of the river Thames to the wild and windswept Yorkshire coast, Dracula’s eternal muse, Mina Murray, vividly recounts the intimate details of what really transpired between her and the Count—the joys and terrors of a passionate affair that has linked them through the centuries, and her rebellion against her own frightening preternatural powers. Mina’s version of this gothic vampire tale is a visceral journey into Victorian England’s dimly lit bedrooms, mist-filled cemeteries, and asylum chambers, revealing the dark secrets and mysteries locked within. Time falls away as she is swept into a mythical journey far beyond mortal comprehension, where she must finally make the decision she has been avoiding for almost a millennium.   Bram Stoker’s classic novel offered one side of the story, in which Mina had no past and bore no responsibility for the unfolding events. Now, for the first time, the truth of Mina’s personal voyage, and of vampirism itself, is revealed. What this flesh and blood woman has to say is more sensual, more devious, and more enthralling than the Victorians could have expressed or perhaps even have imagined.


Listen to and watch an interview with Karen Essex

There's 1 paperback copy of DRACULA IN LOVE for 1 lucky reader! To enter the giveaway contest, leave a comment and please tell us your favorite fictional vampire, either in literature, television, or the movies.  Don't forget to add an e-mail address where we can contact you in case you win.  (This contest is limited to US and Canada readers). Deadline 30 September. Good luck!

For more about Karen Essex and her work visit her

I stumbled upon this book once while I was in the bookstore, and couldn't help myself. It was an intruiging read, kept me interested through to the end (which I seem to find difficult lately). Just enough spook, and strangeness, and the beauty of a timeless love story all wrapped up for a good read. It is a must, after all, to know the story from the woman's point of view!

I very much enjoyed the story of Dracula (as you can tell partially from my e-mail address).

While I really enjoyed it, I have to say my favorite vampire is Barnabas Collins. I grew up watching him in Dark Shadows go from a not too nice predator to a vampire who loathes what he is. Good stuff!

From Julie Kagawa's new vampire series, I love that vampire!

My favourite fictional vampire is definitely the gorgeous Erik from True Blood. I read the original Dracula when I was 17 and I would love to read this new book.

My favorite fictional vampire is Damon Salvatore from TVs The Vampire Diaries. Runner up would be Jane Jameson from Molly Harper's "Nice Girls Don't" books because she is hilariously snarky.

Thanks for the giveaway. This book looks really good! It's been a long time since I read Stoker's Dracula.