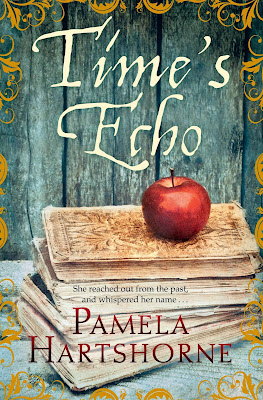 She reached out from the past, and whispered her name...

York 1577: Hawise Aske smiles at a stranger in the market and sets in train a story of obsession and sibling jealousy, of love and hate and carpe desire. Drowned as a witch, Hawise pays a high price for that smile, but for a girl like her in Elizabethan York, there is nowhere to go and nowhere toh ide
Four and half centuries later,Grace Trewe, who has travelled the world, is trying to outrun the memories of being caught up in the Boxing Day tsunami. Her stay in York is meant to be a brief one.
But in York Grace discovers that time can twist and turn in ways she never imagined. Drawn inexorably into Hawise’s life, Grace finds that this time she cannot move on. Will she too be engulfed in the power of the past?

Time's Echo  opens with a nightmare,  so vivid and gripping that your are inexorably drawn into the story and can’t stop wondering what happened to poor Hawise Aske in 1577. So you  go on , page after page,  eagerly wishing  for the mystery to be solved.  Then you start doubting with the protagonist, Grace Trewe: was it all only a dream?

“I sink and rise, then sink deeper, and the more I choke, the more water invades me. There is a terrible pain in my ears, behind my eyes, and my lungs are on fire.
I am flailing, thrashing in the water, but I sink deeper and deeper. I don’t know which way is up and which is down any more. There is nothing but panic and pain and the water blocking my throat, and the bright, terrifying image of Bess looking up at him trustingly, taking his hand.
I need to go back. I need to do things differently, so that I  can keep my daughter safe (…)
But I can’t speak and I can’t breathe, I can’t breathe.” (p.3)

Water  haunted Grace’s memories after being caught in the tragic experience of the Boxing Day tsunami, water mysteriously swallowed Lucy's , her godmother's life as it had done more than four centuries before with Hawise Aske’s life. They both drowned in the river Ouse, in York.  The three women’s destinies seem tightly connected. Grace arrives in York in her attempt to remove the shock of her own negative experience,  in order to sell her godmother’s house and settle a number of pecuniary legacies she had made before dying.

Grace has always been matter-of-fact, independent and rational but her life and her certainties are shaken,  turned upside down during her stay in Lucy’s house in York: she begins seeing and hearing odd things and, moreover, she finds herself living the life of unfortunate Hawise Aske, physically and mentally  experiencing all the dramatic events which lead the 16th century girl to her tragic destiny. Is Grace becoming mad?  How can she slip between past and present like that?

Reading Time’s Echo has been an incredibly thrilling adventure. Pamela Hartshorne passionately and brilliantly conveys  the stories of two distant, different women interweaving them at a quick pace, never skimping on  twists and turns . Suspence, mystery, tension  characterize her narration in this real page-turner.

Time's Echo marks the author's debut in the historical fiction genre after years spent writing best - selling romance books as Jessica Hart. The idea for the novel  grew out of Pamela Hartshorne’s  (her real name) research on the wardmote-court returns of early modern York. In the Elizabethan Age those courts dealt primarily with nuisances – petty offences that affected the quality of life  of a neighbourhood. That permitted the author, who trained as a historian in her past,  to get a privileged glimpse to the ordinary lives of ordinary people living in those years. The talent of   the story-teller matched  with the fondness of the historian create an astonishing haunting atmosphere and a never dull tale. The characters are all convincing, the descriptive moments are  effective and well-balanced with the narrative level.

Last but not least, York is an evocative, atmospheric,  very special setting for this moving, spine-chilling story I  won’t easily forget. One of the best historical novels I have recently read.

Sometimes the past refuses to let go …

Released on 30th August 2012, Time's Echo is available as paperback or kindle at Amazon.

Stay tuned. Pamela Hartshorne will be my guest soon for an interview about Time's Echo and we will be having a giveway contest open worldwide for a paperback copy . Don't miss the chance to win this great book!
Posted by Maria Grazia at Saturday, September 08, 2012
Email ThisBlogThis!Share to TwitterShare to FacebookShare to Pinterest
Labels: Books, From my bookshelf, Historical Fiction, History, Reviews, York

Great review Maria! It is on kindle...fantastic! Might wait for lucky draw though if international! Thanks!

@Helen
It'll be soon and ...international!