BOOK REVIEW - CALL TO JUNO, A TALE OF ANCIENT ROME BY ELISABETH STORRS 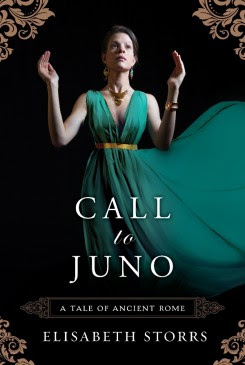 Book Blurb
Four unforgettable characters are tested during a war between Rome and Etruscan Veii.
Caecilia has long been torn between her birthplace of Rome and her adopted city of Veii. Yet faced with mounting danger to her husband, children, and Etruscan freedoms, will her call to destroy Rome succeed?
Pinna has clawed her way from prostitute to the concubine of the Roman general Camillus. Deeply in love, can she exert her own power to survive the threat of exposure by those who know her sordid past?
Semni, a servant, seeks forgiveness for a past betrayal. Will she redeem herself so she can marry the man she loves?
Marcus, a Roman tribune, is tormented by unrequited love for another soldier. Can he find strength to choose between his cousin Caecilia and his fidelity to Rome?
Who will overcome the treachery of mortals and gods?
Call to Juno is the third book in the series A Tale of Ancient Rome, which includes The Wedding Shroud and The Golden Dice.

"Remember how you once told me Rome and Veii are like two unrequited lovers? Only twelve miles apart across the Tiber. They are but a god's footstep away. Both desires to possess the other - only Rome wishes to be the husband and make Veii submit as the wife."

Tales of Ancient Rome is a historical fiction series set in the early Roman Republic and the little known civilization of Etruria. The saga follows the lives and loves of three women; Caecilia, Pinna and Semni, who must survive a ten year siege between two bitter enemies with courage, wit and wiles.

The Wedding Shroud was endorsed by Ursula Le Guin and was judged runner up in the 2012 Sharp Writ Book Awards. Endorsed by Sherry Jones, The Golden Dice was named as a top memorable read by Sarah Johnson, reviews editor for the Historical Novel Review, and was a first category winner in the 2014 Chaucer Awards. Elisabeth’s latest book, Call to Juno, was endorsed by Kate Quinn and Helen Hollick.

It's been an amazing journey since The Wedding Shroud, through The Golden Dice, to Call to Juno. It is one of the best trilogies set in the past I've ever read. It includes 3 page-turners I really enjoyed to delve into. Dense with tension, emotion and sensuousness, crowded with unforgettable vivid characters, the three tales of Ancient Rome will stay with me for their enchanting picture of a world so near to my heart but so distant in time: the magic and beauty of the Etruscan world, the allure and intrigue of Ancient Rome. As I wrote in my first review of Elisabeth Storrs's works, ancient history becomes life, love and passion in her novels.

The journey of the main characters is so interesting, touching and gripping the reader comes to relate to and care for all of them. Caecilia and Mastarna, Arrun and Semni, Pinna and Marcus are my best favourite ones. Though very different from one another, they are all complex, round characters, brave human beings ready to sacrifice themselves for what they believe in and for whom they love.

A Call to Juno is an emotional ride. The reader follows the main characters through tough and testing times: a siege, a terrible epidemy, the end of a very long war resulting into winners and losers. But in a time of great hatred, forgiveness and love will prevail in the hearts of our heroes and heroines.

If you love historical fiction which resonates to contemporary hearts, I recommend you to read this saga.  What I particularly appreciate in this trilogy is Elisabeth Storrs's blend of historical accuracy with smooth, fascinating story - telling. Last but not least, if you are not into series, you must know that you can read the three books both as a saga but also as stand-alone novels.

Praise for Call to Juno
“Elisabeth Storrs’s Tales of Ancient Rome series should really be called Tales of Ancient Veii, as it brings the Etruscan town to life. Thank you, Elisabeth, for giving a voice to some of the most intriguing pieces of the Museum of Veii.” —Iefke van Kampen, director of the Museo dell'Agro Veientano, Formello (Rome)

“In Call to Juno Elisabeth Storrs tells a vivid story of love and war, honor and revenge set in Ancient Rome. Using a skillful blend of history and drama, and full of characters both heroic and human, Storrs transports readers to that long-ago world. Highly recommended.” —M.K. Tod author of Lies Told in Silence

“Not much is known about the ancient Etruscans but Call to Juno is a vivid and fascinating evocation of their fight for survival against the might of Rome. This is a tale of great love and great hatred, of treachery, courage, and honor, told in loving detail by a knowledgeable and practiced story-teller.” —Felicity Pulman, author of The Janna Chronicles

“Elisabeth Storrs brings Ancient Rome vividly to life; her skill as a writer is equivalent to a time machine—we are there amid the history and the drama, immersed so deep that in calling to Juno we expect her to answer back.” —Helen Hollick, author of The Sea Witch Voyages

“God cults, the different faces of love. and the cruelty of war are among the themes in Elisabeth Storrs’ novel on the rivalry between the Romans and the Etruscans. A well-researched, powerful novel that builds to a memorable and terrifying end.” —Isolde Martyn, author of Mistress to the Crown

“Call to Juno is a stirring saga of war, sacrifice, and transcendent love.” —M. Louisa Locke, author of the Victorian San Francisco Mystery series
“With plenty of action and characters you can really root for, Call to Juno is a perfect, wholly satisfying conclusion to Elisabeth Storrs’s trilogy. A Tale of Ancient Rome is one of the best ancient-historical series I’ve read in years.” —Libbie Hawker, bestselling author of Tidewater, Daughter of Sand and Stone, and Mercer Girls

Call to Juno is out today!

Check it out at Amazon.com
Posted by Maria Grazia at Tuesday, April 19, 2016
Email ThisBlogThis!Share to TwitterShare to FacebookShare to Pinterest
Labels: Ancient Rome, Call to Juno, Elisabeth Storrs, Historical Fiction, The Golden Dice, The Wedding Shroud