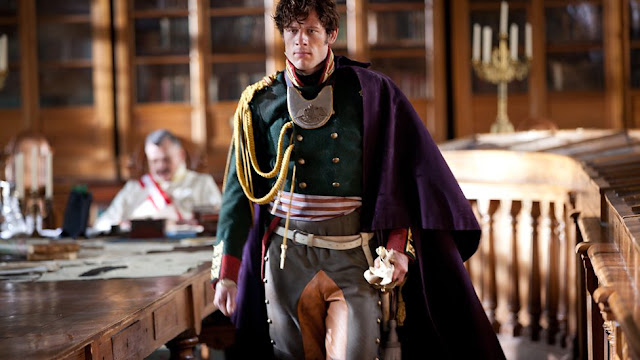 Are you watching War and Peace?

I am and I like it so much!  I knew I had to wait on a bit to understand if I could love or hate this adaptation of Tolstoj's masterpiece, because I was not particularly enthusiastic at the end of  its premiere. But episode after episode,  I started appreciating the cast, the locations, the performances and the rendition of a story I already knew quite a lot about.  I read the book (war scenes included!) a few years ago, what about you? Have you succeeded in going through the whole thick volume? 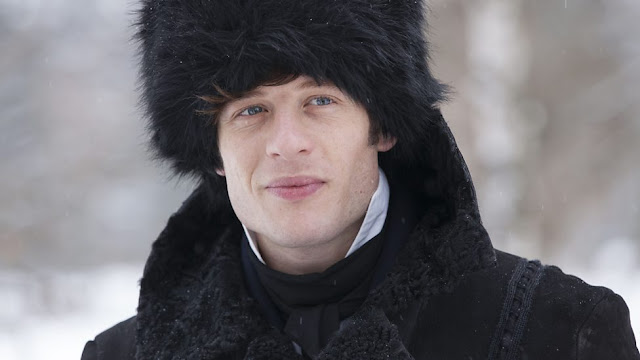 Have you got a favourite character? I have and I guess he is a favourite of many. Andrew Davies, who adapted and sexed-up the novel for the small  screen, defined Prince Bolkonsky as the Russian Darcy, and who better than Mr Davies would recognize a Darcy-like hero? Brooding and restless, reckelss and complicated he is perfect new addition to our gallery of romantic, charming heroes, isn't he? 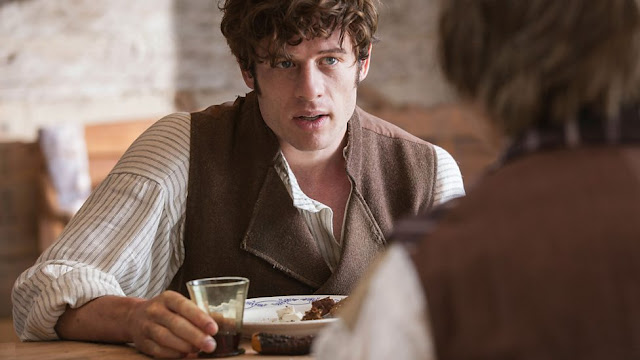 At the beginning of the story, Prince Andrei is a brilliant young man from a noble family, introduced as cynical and disillusioned. His beautiful wife, Lise, is pregnant with their first child. Yet he despises the silly, shallow world of St Petersburg society, he neglects his wife and treats her rather rudely.  He is not an easily likable figure at first.  When war breaks out, he enlists as an adjutant on General Kutuzov’s staff and leaves his wife at his father’s remote country estate. For Andrei, it’s the chance he has been waiting for to find glory and purpose. 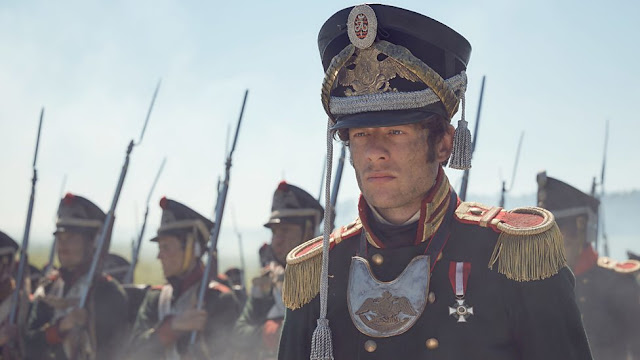 What James Norton says of his character, Andrei

"The people I play are always searching for something. They are never passive, they are always very active and frustrated with their lot. Andrei is an extreme version of that. He is this conflicted young soul. He is hankering after something but he doesn’t know what it is. He tries lots of different things but none of them work. He tries running off to war and searching for glory, he tries a calm and simple lifestyle on his estate farming, and he tries St Petersburg society.It’s a wonderful privilege to engage with this incredible character who is on his journey and compare your life with his. It teaches you a lot about yourself and your own past and what you are looking for. I am very, very lucky to be playing him". (from War and Peace official website) 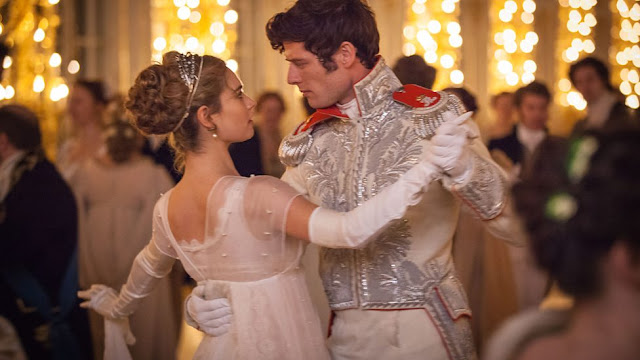 When Andrei is introduced to Countess Natasha Rostova, he immediately becomes enchanted with her liveliness. He believes she owns the secret to happiness. Her joyful outlook on life completely contrasts with his own, especially after the death of his wife. Andrei regains the will to live and becomes more optimistic. He proposes to her and briefly struggles with his father who disapproves - Natasha is half Andrei's age and of an inferior social rank - making clear that he considers himself free to do as he wishes, but that he will honour his father's will to please the old man. 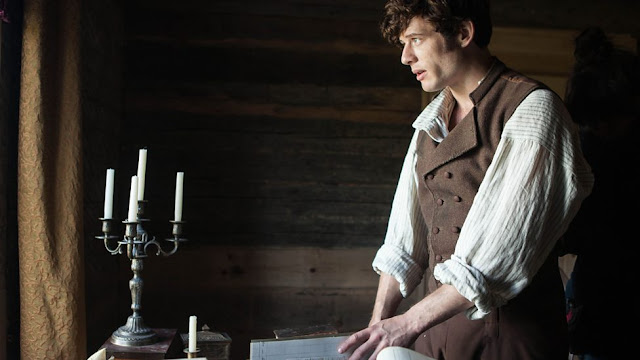 (If you haven't read the novel, beware of spoilers!)  Andrei 's main flaw is a spiritual one: his detachment is an intellectual advantage, but an emotional handicap. Andrei doesn't own Pierre’s eager, continuous search for the meaning of life, but he is also unable to forge deep and lasting bonds with others, and unwilling to forgive their misdeeds. That will lead to his final tragic destiny.

Kudos to James Norton for landing, performance after performance,  such an iconic hero . He's been collecting brilliant achievements in the last couple of years, playing so many different key characters  in great productions such as Sydney Chamber in Grantchester, Sir Clifford in Lady Chatterley's Lover, young Duncan Grant in Life in Squares,  and, especially,  as villanous Tommy Lee Royce in Happy Valley. A gallery of totally different personae and all of them given life with convincing expertise and sensibility by lovely Mr Norton.

I can't believe I forgot to watch it. Kids sports and storm prep. :)