MY KIDS GROW UP AND THEY'RE PRETTY SPECIAL - KIKA, EDO & THE SINGING OF THE TREES 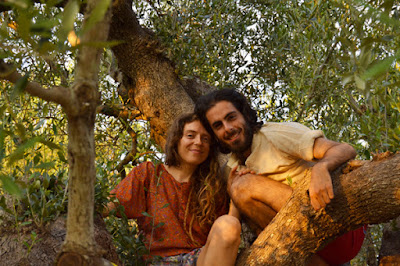 In November you met Maria Sofia, studying Arabic and giving a helping hand in Palestine. In December, Emanuele, living in Milan and working as a software developer. After them, the first of my former students I want to introduce you in 2016 is Edoardo , Edo,  with his lovely girlfriend, Federica, aka Kika. They live in Salento, Contrada Lusci is their place and a lifestyle, about which they write on their blog. They are a special couple and I'm glad to share their story with you all.
It is a story of love, peace, beauty, respect for nature and every living being, hope and incredible adventures.

Edoardo was one of my students, he left school eleven years ago and he is a young man in his thirties now. I met him again a couple of months ago because he and his lovely partner, Federica, presented a very original project, a book + CD,  here in my town and I was invited to the event by friends and colleagues.

Obviously teenagers change once they turn into men and women but what surprised me most meeting Edoardo again was how totally different his posture, attitude, smile, speaking voice and look were. He looked and sounded relaxed, calm, focused and imperturbable. His eyes and his smile were warming, welcoming, peaceful. Well, actually, both Kika and Edo are the embodiment of the word “peaceful” and  both have a special smiling light in their eyes which speaks volumes of their inner world.


When Edoardo was a student of mine, he was an eager cyclist and trained every day on the steep roads around his native village in the mountains, for hours, came sun or rain. He was also a responsible and thorough student, he did his best once back at home to do his homework and study. He also loved playing the guitar in his spare time. After leaving school, he decided to enrol to Rome University to become an engineer, but, later on,  he realized engineering was not  what he really wanted for himself.


Kika and Edo  met each other while studying in Rome and together they made up their minds and chose a completely different path  respect to many of their peers. They left the city and moved to  the countryside in Salento, in the South of Italy,  and started leading a truly simple but rewarding life. They grow the land and produce everything they need practising sustainable agriculture.
What do they do at Contrada Lusci? Federica paints and draws, which is what she has always loved, and Edoardo applies his  music talent and his knowledge of Physics and Computer Science to an astonishingly creative composing method. Both have conveyed their creative talents into a very original project which they financed by a crowdfunding campaign: Viaggiando nel Canto degli Alberi (Travelling  in the Singing of the Trees). 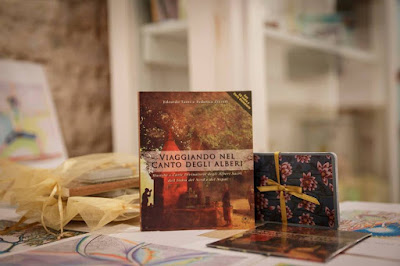 The project “Viaggiando nel Canto degli Alberi” is based not only on words (a book) but also on sounds (a CD) and images (a set of 20 divinatory cards drawn by Federica) and is a result of Edo and Kika’s journey through Northern India and Nepal in search for some of the Sacred Trees of Hindi culture, whose voice they wanted to record. They did it through a biofeedback, which is an electronic device capturing the variations of the electric resistance in the trees and transforming them into sounds. This unique sounds have been arranged into melodies by Edoardo and have become the tracks in the CD.

The book is divided in two parts. Part one deals with different topics which helps the reader to appreciate the entire work: the cult of the trees, the music of the plants, the vegetable conscience and  related scientific experiments , Indian music and the power of sound.
Part two is a guide to the reading of the divinatory cards with colourful images. Through the cards you re-live the magic of the journey, you get the gift of the messages brought by the Trees and also the suggestion of medit(ac)tions to get to a dimension of awareness of your own interior beauty.

During the presentation of Viaggiando nel Canto degli Alberi I was hooked by Edoardo and Federica’s words and beautiful smiles as well as amazed at listening live to the music coming out of a cyclamen.  I’m convinced I’ve learnt much meeting them, listening to their words and to their music. I think they’ve found the secret of a happy life: keep it simple, live and love nature, take your time, trust and love yourself.
They don't follow any movement or belong to any religious group but they firmly believe in the respect for any form of life on Earth. I know, they may seem dreamers to many. To me they just appear as successful, joyful,  peaceful, self-confident and committed young people, committed to making this world a better place with their example.

This is what I mean when I say that I find it extraordinarily rewarding for me, as a teacher and as a human being, to get to learn life lessons from my own students.


or write to them at contradalusci@gmail.com