AUTHOR GUEST POST - SUSAN BUCHANAN, HER LOVE FOR EVERYTHING ITALIAN AND SIGN OF THE TIMES + E-BOOK GIVEAWAY 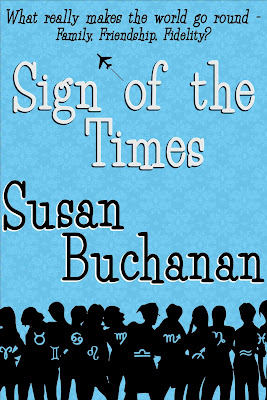 I have been asked to explain why I chose Tuscany for the setting of the start of my novel Sign ofthe Times.
To be honest, it wasn't a difficult decision. I love Italy and all things Italian. I had rented a villa in 2003, with seven friends, in Bibbiena, which features in the novel. At the time, it hadn't occurred to me that I would use it in a novel, and indeed I wasn't even writing back then.
But when I sat down to start writing Sign of the Times, and chose my first character, Holly, and made her a travel writer, it seemed instantly clear to me where she should research her next book.
Bibbiena is a lovely little village, in my mind, very traditional. It's close to Arezzo, which is briefly mentioned also. We stayed at a beautiful villa called Casa Cardinale.  As it turns out Holly's B&B where she stays is a mix of this villa and a hotel I stayed in in Positano. Both times the owners virtually adopted me, as they were so delighted I spoke fluent Italian.
From Casa Cardinale we could see up the hillside to other villas. One of those villas was the setting for the Italian wedding in the book.
Many of the scenes in the book are those which I actually experienced: going to the market place, watching the wizened old men playing chess outside a café, going to the bottega where Holly deliberates over the prize-winning olive oil and which wine to buy. The fact that shopowners and locals alike, knew who we were, happens to Holly also.


The salumeria mentioned is where I actually made the mistake of asking for 800g of salami, instead of 8 slices!  etti/fette
We, like Holly, visited the castle at Poppi and did the audio tou, and the monastery at La Verna. We even took home some of the raspberry liqueur - very potent!
When Emilio offers Holly a lift in his car, when she is walking back up the road out of town to the villa, we also did that, but it was at night, after a few too many glasses of wine and a fantastic dinner in town. The only light came from the fireflies which led the way, as we had foolishly not brought a torch . I had never seen fireflies like that in my life, nor since.
The village where Holly breaks down in her car, near the start of the book is fictional and Dario, unfortunately is also a figment of my imagination!
The books mentioned in Dario's library and during Dario and Holly's chat, are all books I studied at university, as I did a Masters degree in languages, including Italian.  Lampedusa - Il Gattopardo; Verga - novelle; Dante - La Divina Commedia, and Sciascia's A Ciascuno il Suo were just a few of the texts I had to study.  I also loved Boccaccio's Decamerone.
One of the elements of Sign of the Times which readers tell me they enjoyed was the food - so, of course, Italy was the perfect choice for this.  The way food is a labour of love for Italians was integral to that part of the story, as was the close  relationship between the Tuscan landlady and her sons , which was quintessentially Italian. I have been lucky enough to spend a lot of time in Italy, both for work and pleasure, although unfortunately have never lived there.
Since there will be a continuation to Sign of the Times, in late 2013-early 2014, I wouldn't rule out a return to Italy, as it's a country very close to my heart. Susan Buchanan lives in Central Scotland with her partner, Tony. Sign of the Times is her first novel, published Mar 2012. Her second novel is expected to be released very soon.

Twelve people. Twelve star signs. Sagittarius - Holly, a travel writer, visits Tuscany to research her next book. Seeking help when her car breaks down, she gets more than assistance when Dario, a vineyard owner, puts temptation in her path. Disappearing without explanation, he proves elusive. Bruised, Holly tries to put it behind her until a chance encounter brings her feelings to the surface again.Capricorn – Holly’s fiancé, Tom misses her while she is in Italy and turns to an internet chat room for solace. His construction business is under threat, but could foul play be at work?Gemini - Holly’s sister, Lucy, a serial man-eater finally meets her match, which puts her long-term relationship and career in jeopardy. Cheating she discovers, can have devastating consequences.Libra - Holly’s uncle Jack, an eminent prosecutor, juggles a difficult teenage son with his high profile career and finds himself lacking. When his son’s school work starts slipping, he decides he needs to take control, but it’s not long before the balls all come tumbling down and Jack finds his family on the wrong side of the law.One event binds them all…

Here is Susan Buchanan on... Sign of the Times:

I always wanted to write a novel with characters based around the signs of the zodiac, their personality traits, jobs etc. I took a year off work to finish it, as I had been writing it for 6 years in my spare time and was only half way through. Writing a novel with 12 key characters was a mammoth challenge, but I loved it. I hope you do too. I love to travel and some of the places in the novel, are places I have been to. When I read, I love to read books about foreign parts that I have visited - it immerses me more in the story. I wanted to do the same in my own novel. I love reading, always have - romantic fiction, crime, contemporary drama, pretty much everything.

There's an e-book copy to win! Enter the contest leaving your comment + e-mail address below. It is open worldwide and ends on November 2nd.

That sounds interesting. I'd love to read what you have written about my sign, Aries. I always feel very happy and pround in a sort of way when I hear about foreigners loving our country, especially if they are English/Scottish, because I love all things british, so it is a requited love :-)
Silvana

Absolutely want to win this! Thanks!

Vava, all I can tell you is that Ben, the Aries character, is Scottish and my favourite male character in the book. There are 5 male and 7 female sign characters. He is a mountain rescue volunteer. I love Italy and must have been Italian in a previous life or something!
Aries in Ben's case is assertive, courageous, pioneering, a natural athlete, impulsive and good at motivating others.
Good luck all of you, Sooz

I like reading my horoscope :)
I find the idea of 12 characters with different signs very interesting.