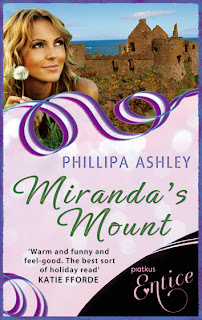 Phillipa Ashley is my guest today with a lovely post about romantic adventures, castles and pirates. I love the setting of her latest romance, Miranda's Mount. It's a very special place I just happened to visit  last summer, it's in Cornwall and ... unforgettable. Discover more, read Phillipa's post!

As long as I can remember, I’ve loved romantic historical adventure stories such as The Scarlet Pimpernel and The Three Musketeers and I’m an addict for period dramas in this vein. In fact I think that the BBC’s version of Lorna Doone with Richard Coyle as John Ridd is probably my favourite of period drama of all time (alongside N&S of course!) I love the drama, the passion and the sheeer thrilling adventure of these wonderful books and productions.

Even now, if I’m not careful, I’ll find myself hooked on an old Errol Flynn Robin Hood movie, or Elizabeth & Essex... and The Wicked Lady would be my desert island movie. It may be in black & white but I love it so much I ordered a copy on DVD. Even my daughter, who saw it while at home ill with glandular fever, is now hooked.

In 2010, I was delighted to be asked to be a judge for the Romantic Novelists Association’s Romance prize – now the RONA Rose – for shorter romantic fiction. There were some great entries and the one that won had a lasting impact on me. It was a Mills & Boon historical romance by Louise Allen called The Piratical Miss Ravenshurt. It followed the adventures of a young woman who is forced to work as a cabin boy on a pirate ship and comes to the attention of an undercover naval officer called Nathan Stanier.

How I wish I’d written it –but sadly, I could never have done that.  I have a very contemporary voice that doesn’t lend itself to period dialogue and I’ll admit, while I have a keen interest in history and an enthusiastic member of the National Trust, I could never achieve the level of knowledge and scholarship required to write a historical romance.
That didn’t stop me dreaming however: that one day I would write my own romantic adventure, preferably with a pirate hero and a castle.

In January 2011, I was dozing off on a car journey and suddenly I had one of those moments: not just light bulb but lightning. The idea for Miranda’s Mount flew into my brain, and instantly I just knew that it would be set on an island castle (just like one of my favourite places, St Michael’s Mount in Cornwall). I started writing the moment I got home and a year later the book was finished and bought by Piatkus Entice.
Finally my dream of writing a romantic adventure in a historical setting– albeit set on contemporary life had come true.

I am sure that the book is good. Cornwall is a romantic place filled with history and magic. I am going to read it.

Hope you enjoy it Aurora - the real island captivated me as much as it did Maria - it's a must see in the UK I think: every bit as much as London.