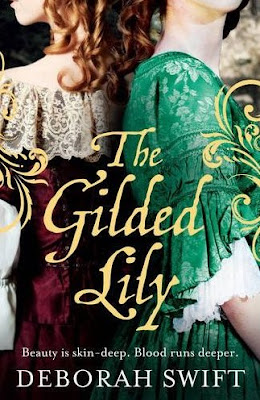 Hello everyone! Time for a new author interview and time  to discover a new unforgettable historical fiction novel. Join me, welcome Deborah Swift at FLY HIGH! and check out her just released The Gilded Lily. I'm sure you'll love it!

Hello and welcome at FLY HIGH,  Deborah. It’s a great pleasure to have the chance to present you and your new spellbinding novel, The Gilded Lily to my readers, who are always so interested in historical fiction. Could you start telling us something about your heroine, Ella?

I think Ella is an unusual heroine because she is selfish, ambitious and stubborn, not a combination that would usually attract a reader. Yet I hope she is still loveable in some ways because the reader can see that Sadie loves and relies on her. And I think we appreciate that underneath she is still insecure and unsure of herself moving in a society she does not truly understand.

Is she inspired by any other literary heroine you admire?

I admired the way some of Charles II’s mistresses came from nowhere to be very influential at court. Women like Nell Gwyn and Moll Davis who were actresses or courtesans who used their physical beauty and charm to move upwards in society. Like them Ella is always hoping to be noticed by someone important!

London in 1660 was the stage of great changes after years of darkness: Charles II was restored on the throne after many years of Puritan rule. What were the most exciting aspects of those years you discovered while researching?

I think what struck me the most was the precariousness of life in those times. I researched the sort of penalties you would be given for stealing your employer’s goods. At this time if you stole things worth more than twelve pence from the person who employed you it was considered treason – so the penalty was death by burning. Public entertainment was often to watch a hanging or pelt a man with stones in the pillory. The era was characterized by violence and death lurked around each corner –death by disease such as the plague, or by mysterious witchcraft, or by the law.Yet still at this time there was great optimism that a new era had begun, and the times of dark Puritan repression were over.

How difficult was life for a woman at that time?

A woman in the 17th century was generally either a servant or a wife, in other words a possession. In some ways the lower classes were much less restricted than the upper classes, in that they could move about the city more freely as tradespeople such as milk girls or ribbon sellers, and many worked in crafts such as wig-making, button carving, or stocking knitting.

Sisterhood is one of the themes in your story.  How did you explore it through Ella and Sadie?

I was interested in how people with the same background can fare very differently because of the stories they tell themselves about who or what they are. I thought it would be interesting to have one girl rely on her looks and the other on her skill and then contrast their journeys. I was also interested in the fact that sisters can be quite cruel to each other, yet underneath there is still a strong bond. This is why I chose the tag-line, Beauty is skin deep. Blood runs deeper.

What is the most important ingredient in your book? Mystery? Romance? Adventure?

The book is a character-driven adventure, that I hope builds into a page-turner. It examines the nature of stories – how we rely upon them to make sense of the world. And yes, there is a little romance in there too!

If you could be one of the characters in your book, who would you like to be? Why?

Actually I think I’d like to be Sadie. Although she has probably the hardest time in the book, there are people who genuinely care for her. And if I were her I could listen to the apprentice, Dennis telling me stories from his chapbooks.

Who did you have in mind while depicting Jay Whitgift? Do you have any muse?

If I had to use one sentence I would say Jay Whitgift as a character is a cross between Johnny Depp in the Libertine and Bill Sykes from Oliver Twist.  In other words, he is hard-edged and ruthless, and his good-looking exterior hides a few secrets.

What is the most intriguing side of writing historical fiction? And what is instead the hardest aspect?

The research is both the most intriguing and the hardest. I strive for historical accuracy, but also want to tell an engaging story.

What do you think of historical accuracy in this kind of fiction?

Without historical accuracy the book would have a very unstable foundation. Of course I might make errors, but they are unintentional. Some readers wish to be educated as well as entertained, and a faithful rendering of the period is what they expect and what I strive for.

When you are not writing, what do you like doing?

I love to walk in the country, do yoga or tai chi or sit and read a good book! J

What are you up to at present or in the next future?

My next novel due out next year is called A Divided Inheritance and is set in Jacobean England and Golden Age Spain. It is about a woman who travels to Seville in search of her cousin and becomes apprenticed to a Master swordsman. Very exciting!

Very exciting indeed! Thanks Deborah for taking the time to answer my questions and being my guest. My best wishes for everything in your life and your career.

Winter, 1661. In her short life Sadie Appleby has never left rural Westmorland. But one night she is rudely awoken by her older and bolder sister, Ella. She has robbed her employer and is on the run. Together the girls flee their home and head for London, hoping to lose themselves in the teeming city. But the dead man's relatives are in pursuit, and soon a game of cat and mouse ensues amongst the freezing warren that is London in winter. Ella is soon seduced by the glitter and glamour of city life and sets her sights on the flamboyant man-about-town, Jay Whitgift, owner of a beauty parlour for the wives of the London gentry. But nothing in the capital is what it seems, least of all Jay Whitgift. Soon a rift has formed between Ella and Sadie, and the sisters are threatened by a menace more sinister than even the law. Set in a brilliantly realised Restoration London, The Gilded Lily is a novel about beauty and desire, about the stories we tell ourselves, and about how sisterhood can be both a burden and a saving grace.

Deborah Swift used to work in the theatre and at the BBC as a set and costume designer, before studying for an MA in Creative Writing in 2007. She lives in a beautiful area of Lancashire near the Lake District National Park. Her first novel The Lady’s Slipper, about conflict arising over the rare orchid of that name, was published in 2010.
Discover more about Deborah reading her blog, The Riddle of Writing. Check out her books at amazon.com .
Posted by Maria Grazia at Wednesday, October 03, 2012
Email ThisBlogThis!Share to TwitterShare to FacebookShare to Pinterest
Labels: Books, Giveaways, Historical Fiction, Interviews